www.iol.co.za - do have a look - there are several related articles on dog fighting 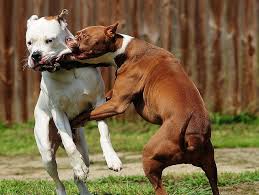 IF YOUR dog has gone missing and you have wondered about its fate, it could be in the clutches of illegal dog fighting syndicates, literally fighting for its survival.

Dedicated rescuers and police have confirmed illegal dog fighting is a growing phenomenon.

While pit bulls and bull terriers are the sought-after pedigrees in this bloodsport that even has professional gamblers waging bets on outcomes, lapdogs are also needed.

Lapdogs are usually used as bait to fire-up the aggression in the big dogs.

And the venues for the bloody brawls, which are never publicly broadcast, might be closer to home than you think, say those in the know.

They said illegal dog fighting has steadily increased in Durban townships, and was no longer geared to a specific race. Verulam, Phoenix, uMlazi, Merebank, Chatsworth, Mariannhill, Shongweni Valley, Hammarsdale and Drummond had become popular areas for the covert fights

A few sources, including partners David Hardwick and Brett Farrell from the Freedom Ride Powerbreed Rescue, an NPO dedicated to rescuing the animals, said the rise in dog theft had been exacerbated by illegal dog fighting.

The partners said the sport had grown increasingly popular because it is seen as a quick source of income.

Farrell said money wagered ranged from R5 000 on bouts in informal settlements, while the professionals were known to place as much as R250 000 on their fancy.

“Doctors, lawyers, teachers, police and people from all walks of life have popularised the sport as they go after the quick cash,” Farrell said.

Hardwick and Farrell care for about 55 rescued dogs of different breeds including pit bulls and bull terriers that have been involved in the bloody fights.

Farrell said dog fights were difficult to curb because professional punters were involved.
“They continuously switch venues making it difficult to track. They use school backyards, open fields as fight venues at night,” he said.

“Different bloodlines will attack differently on its opponent depending on the breed. But a cross-breed between a bull terrier and pit bull could produce a killer dog, even dangerous to humans,” he revealed.

Rings for dogfights are prepared by the syndicate members. These are usually a metre deep pit which is secured by solid wood, to keep the dogs hemmed in, before the bait dog is introduced, while the fighters’ handlers hold onto their charge's leash

Hardwick said dogs often suffered serious injuries during fights, and they were often starved of food and water to agitate them even more ahead of a bout.

“We often find dogs to have lost lots of blood due to deep scars on their body and heads, and they usually have an aggressive temperament, and are almost always a danger to people.
“We are not able stop dogfights because it is beyond our control, but we try to pick up the pieces afterwards,” said Hardwick.

Another source, who asked not to be named and has been rescuing dogs since he was a teenager, said: “Participants are well aware they are engaging in illegal activities.

“So they create a fraternity type of atmosphere, instilling a fear of retaliation to discourage informants and create a double life image through involvement in legitimate dog sport activities.
“The secrecy surrounding these activities is at the highest level. And the syndicate is often involved in other criminal activities.

“There is a lot of dirty money involved, criminals stealing and transporting dogs to other provinces, even outside the borders to neighbouring countries.”

Last week, four Metro police officers received much praise after their brave efforts to rescue Jackie, a stolen bull terrier which they believed was heading to a dog figting ring.

Jackie was found in an informal settlement near Bellair, a suburb of Durban.

Jackie’s owner Yedhvir Ramdhani said finding his dog after it had been missing for a week has restored his faith in law enforcement.

Inspector Deon Carstens led the two-hour operation with three other inspectors through dense bush near the informal settlement.

Metro police spokesperson Superintendent Parboo Sewpersad said dogs were taken into shacks to set scenes for illegal dog fighting, which is an income generator for those involved.
​
He named Bellair, the M7 and Queensburgh as other areas of concern for dog theft as well as hotspots for dog fighting.

“Very often we receive calls about missing dogs and we have noted that the new trend was to steal the animals for the purpose of dog fights,” said Sewpersad.
He confirmed that no recent arrests have been made regarding dog fighting syndicates.

No response was received from the SPCA at the time of going to print.