Is a dog a carnivore or an omnivore?
Dr Chris Bessent
​
www.dogsnaturallymagazine.com

There has long been debate as to whether the dog is a carnivore or an omnivore. The National Research Council of the National Academies and some larger dog food companies consider dogs as omnivores. However, most holistic veterinarians believe dogs are carnivores.

By definition, an animal that indiscriminately eats all kinds of foods, of both animal and plant origin, is an omnivore. Humans are considered omnivores. A carnivore is an animal that consumes only flesh. Cats, for example, are more readily agreed upon by most to be carnivores. Then there are the herbivores, animals that feed on plants, such as horses and cattle.
All mammals have evolved over time to maximize their survival and have adapted physically to their environment in order to optimize their health and survival. So before deciding whether the dog is an omnivore or a carnivore, it’s important to first look at the unique physical features that their evolution has created.

Since we’re talking dietary evolution, the gastrointestinal system is the most obvious adaptation to start with. The digestion of a plant based diet is by nature very different then the digestion of a meat based diet. Plants contain quite a bit of cellulose and starches. In order to break these materials down, the body requires unique digestive enzymes as well as the proper dentition to grind and break down these large components.

Amylase and cellulase are the digestive enzymes a body needs to convert plant based starches and cellulose into sugars, which can then be absorbed by the small intestine, or in the case of cellulose, further fermented to develop usable food macronutrients. Herbivores and omnivores secrete amylase in their saliva to begin the breakdown of starches into glucose as soon as the plant enters the mouth. 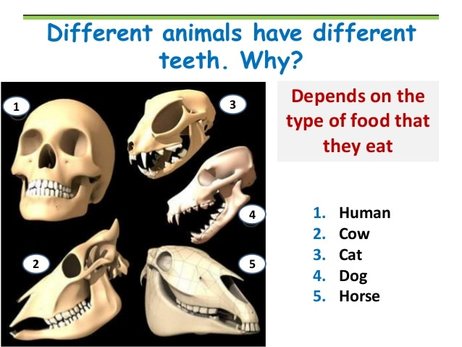 The size, shape and dentition (the way the teeth fit together) of an animal’s mouth have also adapted to fit their diet. Herbivores, such as horses and cattle, have long, large, wide molars with flat surfaces to allow for proper grinding of their high fiber plant source diets. This grinding breaks down plant material into smaller, more usable matter.

The incisors of herbivores are designed to pick the plant material, such as grass. The long tongue then pushes the grass to the inside back of the mouth for grinding by the very strong and efficient molars. The final, mechanically ground food is then swallowed for further digestion.

The dentition of a carnivore is very different, however. The carnivore teeth are designed to rip and tear meat from the bone and then gulp it down for further digestion in the stomach. The canine teeth are long, pointed and sharp to allow deep penetration into the prey. The teeth also have a tight inter-digitation to lock in place to allow the carnivore to rip the flesh away from the prey. There is little to no grinding – the meat is mechanically broken down by only two or three chomps of the molars before the food is swallowed.

Dogs and cats possess these long canine teeth and tight digitation of the molars. To better understand the difference, the teeth of the omnivorous human more closely reflect the herbivore teeth with short canines and large strong molar arcades that allow for the grinding of fruits and vegetables. 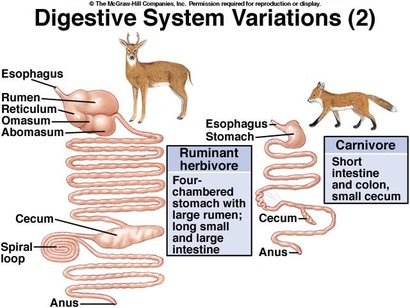 Length of the GI tract

As we proceed down the path of food digestion, the differences between the species are even more apparent. Herbivores have the longest GI tracts, at about 100 feet in length. Their GI tract includes areas for the fermentation of cellulose, which is difficult to break down. Even after the mechanical breakdown of grasses by the grinding teeth and salivary amylase, and the further breakdown by the stomach acid and its digestive enzymes, the cellulose may still need to be fermented in the rumen or the cecum.

Omnivores such as humans have medium length GI tracts of about 20 to 40 feet. The appendix is actually the remnant of a fermentation system in the large intestine.

Cats have the shortest GI tracts of all the species, at 12 to 15 inches. This is because carnivores typically eat easily digestible food such as meats. The canine GI tract is also quite short, at about two feet. This is drastically shorter than the herbivore but also much shorter than the omnivore. Neither the cat nor the dog has an area of the GI tract where the fermentation of cellulose can take place. A carnivore wouldn’t need it.

All animals need Omega-3 fatty acids to support health. An Omega-3 fatty acid is considered an essential fatty acid, meaning the animal’s body doesn’t produce it, so it needs to be consumed. There are both vegetable and fish based sources of Omega-3.

Vegetable based sources of Omega-3 are in the form of alpha-linolenic acid, known as ALA. ALA is found in green leafy vegetables as well as flax, hemp, chia and other plant oils. The ALA needs to be converted to eicosapentaenoic acid, EPA, and docosahexenoic acid, or DHA. EPA and DHA are the active forms of Omega-3 fatty acids.

Herbivores and omnivores can convert plant based ALA sources to EPA and DHA through a series of enzymatic reactions. Cats, however, completely lack the enzymes necessary for this conversion, and dogs can only convert approximately 5 to 15 percent of the ALA sources.

Although they differ somewhat from cats, dogs should be considered carnivores based on their dentition, as well as the length of their canine teeth. A dog’s teeth reflect the mechanics of the ripping and tearing of food. They also possess a shortened gastrointestinal tract, versus the longer GI tract of an omnivore or herbivore. In addition, dogs don’t have amylase, an enzyme that breaks down sugars, in their saliva, like an omnivore and herbivore would have. The relative inability to convert plant based sources of Omega-3 fatty acids into EPA and DHA is also a strong indication of carnivore status.

Based on their digestive tract adaptations, I believe that dogs are scavenger carnivores, while cats are true carnivores. A scavenger is an animal who will sort through discarded material or eat dead carcasses to take advantage of what it finds. Although dogs would prefer meat, they can survive on whatever is available.
​
Despite this, omnivorous humans have been feeding dogs omnivorous diets for years, filled with plant based protein sources such as corn and rice. Can a dog live on this diet? The answer is yes. But the real question is can they thrive throughout their entire life on an ominivorous diet?