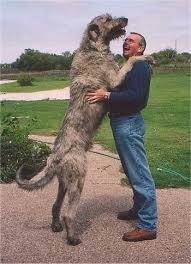 This is really a very old breed of sighthound, and it is believed that it may have been brought to Ireland as early as 7000BC. I t's name originates for what it was bred for - wolf hunting with dogs.

They are huge dogs, and can be as much as 81 cm in height, weighing in about 54 kg. He is the tallest of all dogs and the largest of the Sighthounds  Known as the Gentle Giant, this dog can be both dignified and calm or at times acting playful and silly. Whatever its current behaviour is, the dog is always easygoing and lovable.  This is one of the breeds that does mature slowly and the puppy ways can stay in place until the dog is about 3 years old.

This breed needs space, especially in the garden - somewhere where he can gallop freely and he loves to pounce on and tackle anything that moves. If your own garden would not suit, then do look for a fenced area where he can be left off lead at least twice a week to really have a fast run. Daily, he needs about an hour's walk on lead.

They breed, on average is friendly, and very seldom aggressive,  however should still attend puppy school and ongoing socialization.

​He is not hard to train, but can be a bit slow to pick up things. This is nothing to do with a lack of intelligence, it is just the way the dogs behaves. Always use positive reinforcement methods for training. 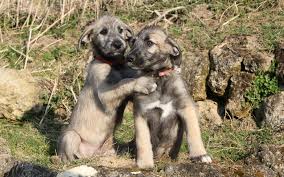 On average this breed will get on with other dogs in the home, especially if introduced to them when a puppy. They can be aggressive to same sex males,and make sure that your dog has been well socialized so that it will accept another dog into the home.

When it comes to which sex get on better, your best bet is one male and one female (both sterilized). Never two females and because they can be aggressive to same sex males, rather keep with one male and one famale. The vast majority of the time two females will get on well until about 8 - 9 months of age and thenm fighting for position tends to occur. When males have the odd altercation, it tends to be over quickly, but with females, it just intensifies and often the only solution is for one of the females to be rehomes. This is not just for this breed, but in general.

Wolfhounds are usually good with the other pets in their family. But some Irish Wolfhounds are dominant or aggressive toward other dogs of the same sex.

​What you do need to be aware off, it to avoid any dogs that tend to be aggressive. If you get into a situation whereby your dog decides to challenge, then the outcome could be very serious.
Do they get on with other animals?

Some have strong instincts to chase and seize cats and other fleeing creatures. Remember that these were hunting hounds who brought down wolves. The speed and power of this breed should never be underestimated. 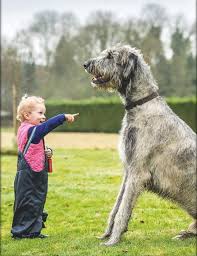 The Irish Wolfhound is a fantastic family dog, they adore children and are very gentle with them. They seem aware of their great size however they could knock over small children so care is advised.
Health

Your breeder should be able to show that they have done testing for diseases known to be heritable (primarily eye, cardiac and joint diseases) and give you a family health history. Being a large breed, they tend to be very prone to bloat. Do talk to the vet about this and general rule is not to feed 1 - 2 hours after strenous exercise, and not to exercise 1 hour after eating. Other known causes of Bloat is a dog that drinks far too much water in one go. It is also believed that lifting the food bowl off the floor assists.
The more serious conditions that this breed is prone to is cancer, particularly osteosarcoma, heart diseases, pneumonia. Joint issues (this is not uncommon in large breeds and crucial you feed food appropriate and monitor exercise). Eye disorders, von Willebrands disease and seizures.
“In today’s age, with the rising cost of veterinary care, it really is a wise decision to consider medical insurance for your pets. Depending on the plan you choose, you can ensure that if your pet does develop one of the health issues the breed is prone too, that you will be covered –additionally, just knowing that any accident your pet may have will be covered, will out-weigh the monthly insurance fee for most pet owners. Our own personal choice is Genricpet as they have a ‘no limit’ policy and their rates are comparable to the rest of the industry. To find out the questions and things to look for in a Medical Insurance, please just follow this link”