How to Recognize Reverse Sneezing in Your Pet 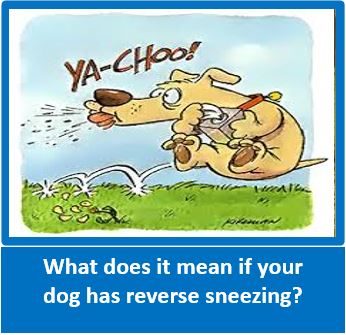 Reverse sneezing -- also known as mechanosensitive aspiration reflex, inspiratory paroxysmal respiration, and pharyngeal gag reflex – is actually a fairly common respiratory event in dogs. It happens more often in small breed dogs, perhaps because they have smaller throats and windpipes.
Brachycephalic breeds, like pugs and bulldogs, with elongated soft palates, occasionally suck the palate into the throat, which can cause an episode of reverse sneezing.
Interestingly, the phenomenon is very rarely seen in kitties.

How to Recognize an Episode of Reverse Sneezing

The sound that accompanies reverse sneezing is kind of a sudden, startling sound that makes many dog owners think their pet is either choking or having an asthma attack.

A dog who is reverse sneezing typically stands still with his elbows spread apart, head extended or back, eyes bulging as he makes this loud snorting sound. The strange stance on top of the strange snorting sound is why many dogs end up getting rushed to the veterinarian or the emergency clinic by their panicked parents.
Episodes of reverse sneezing can last from a few seconds to a minute or two. As soon as it passes, the dog breathes perfectly normally once again and behaves as if nothing happened.
Here’s one example of what a reverse sneeze looks like:

Causes of Reverse Sneezing and How You Can Help Your Pet

Reverse sneezing is caused by a spasm of the throat and soft palate. The spasm is triggered by an irritation to the throat, pharynx, or laryngeal area. The most common triggers are excitement, exercise intolerance, a collar that’s too tight, pulling on the leash, an environmental irritant like pollen, perfume, or even a household chemical or cleaner, room sprays, or even a sudden change in temperature. Rarely, there can be a respiratory infection or chronic post-nasal drip that causes the condition.

In the winter, my Boston terrier reverse-sneezes every single time he goes from inside to outside. I open the front door and he automatically reverse-sneezes. It no longer makes him nervous, and I’ve also come to expect this reaction from him when he heads outdoors in cold weather.

Reverse sneezing rarely requires treatment. As soon as the sneezing stops, the situation is resolved.
But since episodes of reverse sneezing can make your dog anxious, it’s important that you remain calm. The biggest issue I see in my practice is a conditioned panic response in a pet, triggered by an owner who freaks out each time the dog reverse-sneezes.

If you feel the need to do something for your dog, you can try massaging her throat to stop the spasm. You can also try covering your pet’s nostrils very briefly. This will cause her to swallow, which usually helps clear the irritation and stop the sneezing.

If the episode doesn’t end quickly and if you trust your dog’s response, you can try putting your hand in her mouth and pressing on her tongue. This will cause her to open her mouth wider and help move air through the nose effectively.

But honestly, these types of intervention are usually not necessary and can sometimes add to everyone’s stress level. I do recommend owners pay attention to when reverse sneezing occurs, where the dog is and what she’s doing right before or as it begins.

One of my dogs only reverse-sneezes when she’s suddenly awakened at night. So we take extra care not to disturb her when she’s sleeping. With any type of movement or noise, especially if it’s sudden or loud, she’ll stand up and reverse-sneeze. It scares her, so we remain calm, tell her everything’s fine, and in a few seconds it passes.

If you can figure out what’s triggering your pet’s reverse sneezing episodes, you can work to reduce or resolve the problem.

When to See the Vet

If your pet’s reverse sneezing becomes a chronic problem, or episodes are becoming more frequent or longer in duration, I recommend you make an appointment with your vet to rule out things like a potential foreign body in the respiratory tract, nasal cancers, polyps or tumors, nasal mites, a collapsing trachea, kennel cough, or a respiratory infection.

If you’re able to catch a reverse sneezing episode on video to play for your vet, it can sometimes help him or her discern what’s really happening – whether it’s reverse sneezing or perhaps something else.

If your pet is experiencing prolonged episodes of reverse sneezing, bloody or yellow discharge from the nose, or any other accompanying respiratory problems, it’s time to make an appointment with your veterinarian.

And if you have a cat with chronic reverse sneezing, since the condition is less common in kitties, it’s important to investigate the possibility of feline asthma or an upper respiratory infection.
Just as dogs sneeze intermittently throughout their lives, most dogs have at least a few reverse sneezing episodes during their lives as well. In the vast majority of cases, the episodes are temporary and intermittent, resolving on their own, and leave the dog with no aftereffects to be concerned about.