If your dog does any of these things he is trying to tell your something!

(This article was sent to us by one of our readers who unfortunately did not know the source - we could not trace it back to Doctors mentioned below either - sorry!
It can be tough to know what your dog wants sometimes — they don't speak English and we, of course, don't speak bark. Thankfully, though, some very smart pup pros and veterinarians have dedicated their lives to helping us decode what every sniff, paw, tail wag, and head-turn really means.

"People are verbal, and not really great observers," says Dr. Bonnie Beaver, a veterinary professor at Texas A&M University, and executive director of the American College of Veterinary Behaviorists. "Animals, on the other hand, are the opposite." Bridge the communication gap with your dog by keeping a keen eye out for these telling behaviors.

1. He licks his lips or yawns — but he's not hungry or tired.

These seemingly innocent behaviors are actually early indicators that your dog is uncomfortable or stressed in his current situation. "Most people only realize there's an issue when more overt behaviors are displayed," says Dr. John Ciribassi, a veterinarian at Chicagoland Veterinary Behavior Consultants and co-editor of the book Decoding Your Dog. "Aggressive behaviors like barking, growling, baring of teeth, snapping, and biting are obvious, but they're the end product of stress gone undetected."
​
Other often overlooked stress signs might include a raised paw, a furrowed brow, and a refusal to look at the source of his frustration (perhaps another dog, some kids, or possibly even you). If these cues go unnoticed, and the perceived threat remains, the situation can deteriorate, and "... the dog is forced to escalate and provide behaviors that people do understand," says Dr. Ciribassi. 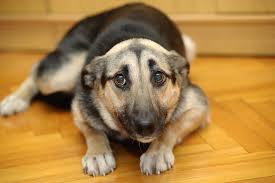 2. He's curled up and his ears are flat or his tail is tucked in

."When you notice these sort of reduced-size postures, your dog might be trying to get away from a situation," says Dr. Beaver. She also warns that this could be an especially dangerous situation with kids. Because they are often closer to eye-level with the dog, they'll look him in the eye, which could be perceived as a threat. "If you think about it, direct eye contact is a major threat for humans, too — but we can tell people to back off," she says. If a dog feels trapped or can't leave an anxious situation, he might stiffen up, growl, snap, or even bite. "It's important to never leave a child and a dog alone unsupervised for this reason. People get into trouble when they assume their dog would never hurt anyone, but a young child could provoke a stressful situation."

3. He's growling at another dog and his hair is standing up.

Just like humans might want to display confidence with their posture, dogs try the same ploy. "If they're walking very stiffly with their head up and tail up, and their hair is standing on end, they're trying to display a sign of dominance," says Dr. Beaver. "It might not be that impressive when a Boston terrier does it, but imagine a golden retriever!"

If when you picture a happy dog you instantly see a cheery, furry face and a playful wagging tail, you're not totally wrong. A loose, gentle wagging is generally a sign of a relaxed dog who just wants to play. But, reminds Dr. Beaver, there are times that a wag is not friendly. "If a dog's tail is high, stiff, and moving very fast — almost as if it's vibrating — it's a sign of aggression we call 'flagging'.

5. He has that guilty look on his face.

"People tend to interpret submissive behaviors — like ears pointed back and angled downwards, a lowered head, exposed the belly, or tucked tail — as the dog demonstrating that it knows it did something wrong," says Dr. Ciribassi. "But these moves actually do not indicate a degree of moral awareness by the dog." Instead, they're behaviors meant to avoid the aggression your dog senses (like, in this case, you yelling at him for digging through the trash). "It's purely a reflexive means of self-preservation that can develop when punishment has been the typical response to problem behavior. Over time, if this approach persists, we can see the submissive behavior develop to include aggressive responses."

A more constructive approach to dealing with bad dog behavior involves traditional, structured obedience training, a practice that Dr. Beaver says is almost more for the owner than the dog. "Make sure you're the one offering the obedience commands in the class, not the trainer," she says. This is important because if the commands come from someone besides you, your dog won't associate what he learned in the lessons with you — and unless you're going to invite your trainer to live with you, that's a problem.

"This is what we call a 'play bow'," says Dr. Beaver. "It says, 'I'm getting into my playing mode and I'm going to play aggressively'." Dogs might also bring you a toy if they're seeking interaction. Humans tend to buy dogs lots of toys, so they learn to use them to be social.

7. He doesn't approach you when you call him.

​Guess what? Sometimes dogs want alone time, just like you do. "Dogs do not have to come when called," says Dr. Ciribassi. "Inviting a dog to approach and then waiting for the response is best." You can do a similar test when deciding whether a dog wants to be petted — place him in area in which he can easily get away, and then try petting him. If he looks away, licks his lips, tries to move, or doesn't lean back into you once you stop petting him, he's uncomfortable. "It's also best to leave your dog alone when they are in their safe area — like a crate or on a dog bed. It's just like how you would not want to be disturbed when reading a good book relaxed in a recliner."

Never-ending barks can mean many things, depending on the situation. "A dog might bark if it senses a threat, or it might serve as an effort to warn his family that something is bothering him," says Dr. Beaver.

Dr. Ciribassi adds that noise-phobic dogs might yelp during storms or in response to everyday sounds, and a dog barking at home may be a way for him to establish his area. "Barking can also occur as a part of territorial behavior," he says. For example, "When people leave their dogs loose and alone in yards, dogs develop innate territorial tendencies, since they can practice the behavior at will."

Sometimes, though, a bark is just a bark. "They might also bark just because they're bored and trying to get attention," says Dr. Beaver. "Often this behavior has [developed after having] been reinforced for a long time, but if you work on ignoring it, they'll eventually [break the habit]. If everything is all right, don't engage with them and they'll realize it's not something they can do to get attention anymore."

9. He's chewing on your furniture.

Again, there can be quite a few explanations here. "Some dogs chew when alone because of separation anxiety," says Dr. Ciribassi. "Puppies chew when teething and in exploration — if not adequately redirected, the chewing can persist into the dog's adulthood."
Sometimes, though, it's just because a dog is, well, a dog. "Some breeds are just more mouth-oriented, and they'll get into trouble because they're genetically programmed to," says Dr. Beaver. Another possible explanation? A delicious smell. "It could even be that food accidentally gets dropped next to a certain piece of furniture, and the dog might try to go after the smell." It's hard to blame him in that case.

In general, if you're ever concerned about your dog's behavior, stop by your vet's office for a quick wellness check-up. It never hurts to be sure it's not something bigger, and most vets have lots of treats around, making it a fun visit for your pup, too!