annum
Human Pacemakers Can Be Used For Dog Hearts

By Briana Hansen
www.cutenes.com
(Lovely website. worth a visit) 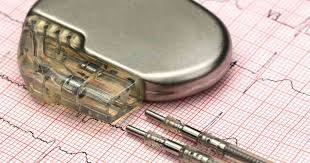 You likely already knew that pacemakers help humans with heart conditions. But our canine companions can benefit from these life-saving devices, too.

The first pup pacemaker was implanted in 1967 in a 10-year-old dog and the procedure worked wonderfully, giving him five more happy years of life.

When comparing your heart to that of your canine companion, his heart is similar to yours in form and identical in function. There are differences, however, when it comes to the rates at which these two hearts beat, and the commonly diagnosed cardiac diseases of humans and dogs.

Dogs who suffer from heart conditions that can't be treated with medication — including sick sinus syndrome, arial atrial standstill, and advanced atrial ventricular block — can be helped with pacemakers just like humans, according to Dr. Karen Shaw Becker in a piece she wrote for Healthy Pets.

While pacemakers work in dog hearts just like they do in the human hearts, canine pacemakers are more cost effective, ranging in price around $4,000. Though, some vet insurance companies warn that the actual cost of the procedure could be as much as $15,000. Be sure you know all the fees associated with it before diving in.

Maintenance is relatively easy for puppy pacemakers, like it is in humans. Dogs will need bi-annual check ups with a heart specialist to make sure everything is okay.

So far in the history of pacemakers in pups, there haven't been any major instances of the pacemaker negatively affecting a dog's health, according to Dr. Becker.

​So in case you're in the difficult pup predicament of having a serious heart issue in your beloved fur friend, know that there are already solutions available to you that may have been developed for humans but, luckily, also serve our best friends.