www.blog.dognition.com
(there are really some great Blog's on this website - great variety, worth a look) 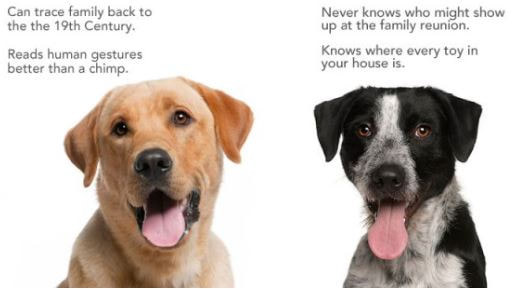 Sometimes I feel like my best friend just doesn’t understand me. I call him and he doesn’t respond. I point and he looks at my fingertip instead of whatever I’m pointing at. I’m talking about my dog Teddy, of course.

I wouldn’t call him overtly independent. In fact, he’s off-the-charts empathetic, and he does look to me for direction from time to time. But it seems like he’d prefer to make his own decisions than use my help. I wondered if his lack of interest in my pointing had anything to do with his previous homelife. We adopted him from a shelter, and we have no idea what sort of human communication he’d received before us. As it turns out, the fact that Teddy is more likely to use his own memory over my pointing may have something to do with his breeding, or rather, his lack thereof.

As each Dognition owner discovers new insights into his or her own dog’s problem solving strategies, collectively we gain new information about how all dogs think. Thanks to these “citizen scientists”, we’ve learned that purebred dogs may rely on their communication skills more than their mixed breed brethren like Teddy. So what do mixed breed dogs rely on instead? Their memories. That explains why Teddy would rather look for his lost ball himself instead of noticing that I’m pointing it out to him.
​
These differences were observed in pointing games, memory games, and games that pitted memory versus pointing. This new finding means that differences don’t just exist from dog-to-dog, as we’ve always known, but perhaps a line can be drawn between mixed and pure breed dogs as groups, when it comes to memory and communication.

Until today, science hasn’t said too much about breed differences, because making breed-specific findings requires observing a great deal of dogs. Until now, sheer logistics have made it difficult, if not impossible, to study so many dogs across very specific criteria. Because Dognition enables dog owners to play science-based games in the comfort of their own homes, we’re able to learn more about dogs at a much faster pace than before.