How Do I Train Proper Doggy Play Skills Faster? 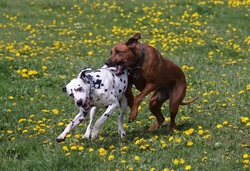 Question:Thank you for the post [on over rambunctious dog play]. I am relating to this exact situation currently.

We have a 5 month old (neutered) pit/lab/shepherd puppy who really loves to play with dogs. His issue is that he doesn't pick up on the social cues of when the other dog doesn't want to play, or is done playing.

We recently fostered a little terrier/chuhuaua overnight from the rescue that I volunteer with (trying to socialize our pup and help out at the same time). If the dog growled at him (as the terrier didn't want to play at all), he'd get startled, jump back, and then approach the dog again to play. He does not start fighting, but he really just doesn't know when to stop or when the other dogs are done playing. We supervised them the entire time, always telling Stig (our pup) when to stop and come back, and eventually would learn to leave the other pup alone.

Is there a different/better way of teaching him to be gentle and to know when enough is enough? I appreciate any advice.

Melanie from L.A.
Answer:Melanie, you’re on the right track. The spot-on 100%, immediate, come when called is one of the main essential elements for teaching proper pooch interaction and play.

However, one key element beyond just a superfast recall is the need to perform exercises for keeping your dog focused on you around the other dogs. That is, work on fast-paced focus exercises that rely on your speed and clear movement to make it fun. The ones that I start with are repeat sits backwards, and repeat sits running to the side as demonstrated in BehaviorBytesNewsletter Vol 7 and the blog, Train a "Come When Called" at the Dog Park (For more step-by-step instruction see Perfect Puppy in 7 Days). Then release your dog to play.

That is, start with these exercises first and when your dog’s focused on you, then release him for his first play session. Then call your dog back to you before he gets overly aroused, repeat some focus exercises (as short as just a couple of seconds but can be a lot longer) and when he’s focusing well, release him again. Vary the amount of time you do the focus games based on how well he’s paying attention to you. When he has eyes only for you as if there’s no other dog present, then release him, first immediately but then expect longer bouts of attention before he gets to play again. The goal is 1) you play these focus games long enough that he's less likely to run back to play in an overly excited way and 2) that you call him out frequently enough—for instance, ten times in 10 minutes, so he gets the message. That message being that coming over and playing with you will mean he gets to play with the other dog again so there’s no need to play like it’s his last chance on Earth to ever play with dogs again. The second message he’ll get is that he shouldn’t get overly engrossed in play because he needs to keep an ear open for you call that signals a short, super-fun intermission.

Of course, another key element is that when you actually perform the come when called and focus exercises you have to hone your technique. The speed and direction of your movement and timing and swiftness of treat delivery will make all the difference in the world. They are the difference between whether your game is fun, like MTV, or boring to your dog, like the Lawrence Welk show is for kids. If your game resembles the Lawrence Welk show, then it will take a long time to convince your dog that it’s worthwhile to focus on you over the other dog.

Luckily, if you do have decent technique and follow these guidelines with each play session—even having multiple play sessions with a given dog per day, your overly rambunctious pooch should get better with each individual dog quickly—within a few sessions. And if you do this with every dog all the time, then pretty soon his polite play should become a habit.