​Getting Rid Of Your Dog 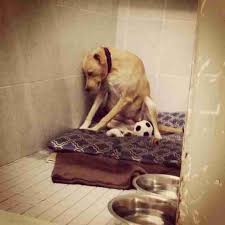 Most people love their pets and feel that they’re an important part of the family. No sooner would they get “rid of” their dog than they would their own children if there were a problem.
​
Unfortunately, there are also millions of other people who relinquish their dogs to shelters every year… contributing to the approximately 9.6 million animals euthanized in shelters annually.

According to the National Council on Pet Population Study and Policy, the top ten reasons for dog relinquishment to shelters in the U.S. are as follows:

Upon reading this list, do you agree that most of these problems could have been avoided? After all, why would a person get a dog in the first place if it hadn’t been okayed with their landlord or they didn’t have the time or money to care for it?

Keep in mind, the above reasons were compiled regarding people who relinquish their dogs to shelters. However, there are even more people who get “rid of” their dog through other avenues, such as rescue organizations, giving their pet away or finding him a new home on their own.

One of the common reasons I’ve noticed that leads people to get rid of their dog is problematic behavior with the family’s children. Issues such as jumping up, play biting, chewing household items and intolerance of the children’s constant affections are common issues.

At first glance it may seem almost justified to give away a dog who jumps, nips and knocks over children. However, upon further speculation we must ask ourselves these questions: Why is the dog jumping, nipping and chewing or perhaps growling at the kids?

Like people, dogs need an education too. If we do not teach them, they do not know that what they’re doing is wrong. Just as children are taught their manners, so do dogs need to be taught not to jump, play bite or chews things other than dog toys… it is not automatic.

When it comes to intolerance with children, it is often unrealistic expectations that lead to this problem. Why are the children allowed to constantly grab at, pick up and continuously manhandle the dog? Would people allow children to do those things to a sibling or themselves? While pets in households with children do need to be properly socialized and tolerant of childish behavior, at the same time it is unrealistic to expect that a dog would tolerate such constant pestering without displeasure.

The fact is, the majority of cases where dogs are “gotten rid of” could easily have been avoided in almost all of the situations mentioned above. Being a responsible pet owner means planning ahead before getting the pet. Spaying/neutering. Training the pet so manners and behavior are not a problem. And last but not least, making sure all family members treat the pet fairly so behavior problems do not develop.