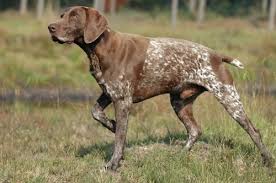 The origin of this breed is unclear before the Klub Kurzhaar Stud Book was formed in the 1870’s., According the  AKC (American Kennel Club) it is likely that the GPS descended from a breed known as the German Bird Dog, which is related to the Old Spanish Pointer.
This is a very versatile dog, being used to hunt both on land and in water. Researching this breed it is interesting to note that at one stage the breed, as a whole, had an aversion to water, which was then bred out of them – Like all the German Pointers, this breed has webbed feet and a naturally water repellent coat..
This breed is used to flush and hunt for a wide variety such as water fowl, pheasant, partridge, jacksnipe, quail, woodcock, duck, raccoons, possums and rabbits or hares. There is an old hunters saying that is “If you cant find anything with a Shorthair, there’s nothing there’, such is the dogs prowess.
German Shorthaired Pointers are noticeable by their ticking and patches of color that can range from black and white to solid liver to roan and combinations of all four.
This is an incredibly atheletic dog that needs to work. Depending on the independent personality, this breed can either be reserved towards strangers, or friendly – what he is not, on average, is aggressive towards people, although he does make a good watchdog by barking.
When it comes to strange dogs, they can be aggressive, especially if early and continued socialization was not done – especially with same sex dogs.
​Is this the right dog for you?

If you want a dog to go hunting with you, then seems to be the perfect choice. The AKC says that “it is such a versatile hunting dog that some call him the jack-of-all-trades. This aristocratic member of the Sporting Group is equally skilled at hunting, pointing, and retrieving”

If you want a dog that will go with you for long walks in nature, running, biking, jogging and hunting with you,  a brilliant choice. This breed needs 1 – 2 hours of exercise daily, so an amble around the block or to the nearest park will not suffice. They love the water and like nothing better than people throwing sticks and balls into it for them to retrieve. Actually this breed can become rather obsessive about retrieve games.

If you want a quiet dog around the home, then also not for you. They mature later, being much like pups, all bouncy and boisterous up until about 2 years of age, so objects and anything in their way can inadvertently be bowled over.
If this breed does not get the exercise and stimulation it needs, it will very quickly become very destructive and barkers of note.

Very clever dogs, they can become very well trained, however, they are not the easiest of breeds to train and either get bored and wilfull, or some of them will become very easily distracted with sights and sounds around them. This dog really does not suit first time owners. It does best when short segments of training are done, being brought into daily life, and must be positive reinforcement methods.

This dog also loves people and is not the dog to be left alone at home during the day. This can quickly lead to separations anxiety which can lead to excessive barking and major destruction. When we say major, we mean major – GSP which are bored or suffer from separation anxiety have been known to pull all the stuffing out of furniture, dig huge holes in the garden, chew through drywall! 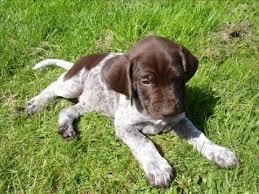 
On average this breed is not aggressive towards other dogs, however you must make sure that your dog has been well socialized so that it will accept another dog into the home and that early and continued socialzation is done.
Potential animal aggression. Many German Shorthaired Pointers are perfectly fine

When it comes to which sex get on better, your best bet is one male and one female (both sterilized). Never two females. The vast majority of the time two females will get on well until about 8 - 9 months of age and thenm fighting for position tends to occur. When males have the odd altercation, it tends to be over quickly, but with females, it just intensifies and often the only solution is for one of the females to be rehomes. This is not just for this breed, but in general. This breed is also known to be aggressive to same sex males, so best option would be male and female.


Bond with each other to the exclusion of you
​
Do they get on with other dogs?
​
This can depend very much on temprement, breeding and early social and continued socialization. The breed often does not get on well with strange dogs, especially of the same sex.

​
Do they get on with other animals?

​They are hunting dogs and as such have a strong prey instinct, and even when socialized early to cats etc, if the cat takes flight, the dog may forget its training, and take after it, often with disastrous results. 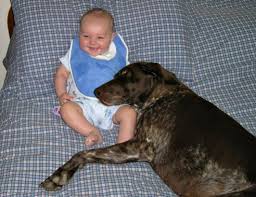 Overall, they do have a reputation of being good with children and seem to understand that infants and very small children need care and protection. They also tend to be tolerant of small children touching them. However, they are very exuberant and can easily knock a small child over, on inadvertently bite them if trying to grab a toy from the childs hands.
​
As with all dogs, it should not be assumed that the dog is child friendly – early socialization as a pup to children of all sizes and ages should occur, and be continued. The child must also be taught how to approach and interact with the dog and how to treat it with respect.

The average life expectancy for the GSP is between 12 and 14 years. Breed health concerns may include bloat. You should speak to your vet about Bloat however what can assist is that the dog does not receive heavy exercise 1 - 2 hours before eating and at least an hour after eating. Bloat often happens when the dog consumes large amounts of water. Another suggesting believed to assist in avoiding, is to place the food and drinking bowles off the floor. Other concerns are,  diabetes insipidus, cleft palate, cranial cruciate ligament rupture (CCL or ACL), epilepsy, eye problems, hereditary lupoid dermatosis, oropharyngeal neoplasia and nasal cavity tumours and von Willebrand disease.