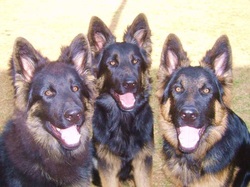 4.       Which other breeds are most compatible with the German Shepherds?

Fearless, active, exceptionally intelligent and unswervingly loyal best describes the German Shepherd. German Shepherds enjoy games like all dogs but they are not the most ‘happy-go-lucky` breed of dog. They also have a more serious side to their natures. They are bred as working dogs and therefore are at their happiest when they are learning new tasks or being useful. German Shepherds can be trained to do almost anything as they are highly intelligent. Games such as hide and seek are really fun for them as besides them having fun, they are using their brain at the same time.

They are natural guard dogs and it is important that they be included with the family and sleep inside. Separating them from the family leads to destructive behaviour.

Is this the correct pup for you? Which is the best home and why?

If you are looking for a guard dog, which sleeps outside and spends the day amusing itself in the garden, then the German Shepherd is definitely NOT for you. They are natural protectors and must be kept close to their family.  Failure to do this and separating them from their family leads to destructive behaviour which at best shows as barking, digging and chewing and at worst they may become aggressive and anti-social.

German Shepherds will bond closely to one particular member of the family but will at the same time love and protect all the members in their `pack. `

Housetraining is usually very quick as long as the owner takes the time to train the pup. Should the pup have an accident, never shout; rather reprimand yourself for being too slow in taking them outside.

Socialization must start as soon as inoculations permit. Socializing by walking through shopping centres is an excellent way of getting your German Shepherd used to unfamiliar noises and strange people. Obedience training at a reputable training school must be a part of the puppies and later, dog’s life.

German Shepherds can adapt to smaller properties as long as they are walked twice a day and taken for training.

To sum it up, if you are looking for a dog who is exceptionally loyal, who will want to be beside you all the time, who will protect you and the family with their lives if need be, who will join in with all your games and you in turn are prepared to make socializing and training a part of your life, love and treat your dog as another family member, then the German Shepherd is for you.

Where do you get a pup from?

Only from reputable breeders! One can contact the German Shepherd Federation of South Africa       ( The  G.S.D. Federation) or The Kennel Union Of South Africa (KUSA) . They have a list of breeders who have puppies available.

Which other breeds get on with the German Shepherd?

In general German Shepherds get on with all other breeds including smaller dogs. I would however not recommend that you mix them with breeds such as Fox Terriers, Jack Russell`s or any breed that is very active or could create over excitement. There is nothing worse than a dog the size of a German Shepherd behaving like a Jack Russell.

They do get on with smaller dogs but there is always the risk that they could unintentionally knock them over or hurt them during play.

Other German Shepherds,Labradors,Golden Retrievers etc. are ideally suited as companions.

I personally have note that German Shepherds are weary of breeds that have covering their eyes such as Bouviers,Old English Sheepdogs and Giant Schnauzers but is they are introduced at a young age they do get along.

Is it wise to have 2 or more of the same breed?

Yes, definitely. This is the most ideal situation as they understand each other. Preferably have a male and female. Two females will also get along as long as they are introduced as puppies. An older female will get on with a puppy female but it is not advisable to introduce two fully grown females. Always have only one male unless you have a lot of experience handling dogs.

In general German Shepherds will get on with animals that they are reared with as long as they are trained to do so. Introducing a cat at a later stage could be problematic but with proper training it can be done. Never tolerate a puppy chasing a cat as later this could lead to a hunting game with a tragic outcome.

Chickens and geese could be a problem. 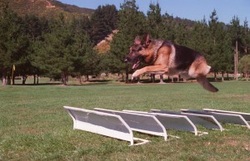 Owning a German Shepherd means that training and socialization becomes a part of your life. They are a working breed and are at their most content when they are learning. It is imperative that socialization starts at a young age. There are many reputable puppy socializing   schools. Besides this take your puppy to shopping centres and get them used to unfamiliar noises, lots of people, cars etc. Ask people to pat your dog to help build their confidence.

Puppy biting must be stopped at a young age. Many people think it is cute or funny when their puppy bites their hands or arms. Remember, German Shepherds have one of the, if not the strongest jaws of all the breeds and later on the biting, which becomes habitual is not funny or cute anymore it`s potentially dangerous. Bye large teething toys, ones that they cannot break which will help them during the teething days.

Hip dysplasia, elbow dysplasia, skin allergies and stomach disorders are all a concern which is why one should get a puppy from a registered breeder.

However environment also plays a part, as slippery floors and over exercising a puppy (up till the age of two years old) can also cause these and other joint problems. Chasing balls and jumping for Frisbees places to much stress on their joints.

Always feed an adult dog twice a day to help avoid stomach torsion and limit exercise and water for an hour before and after meals.

“In today’s age, with the rising cost of veterinary care, it really is a wise decision to consider medical insurance for your pets. Depending on the plan you choose, you can ensure that if your pet does develop one of the health issues the breed is prone too, that you will be covered –additionally, just knowing that any accident your pet may have will be covered, will out-weigh the monthly insurance fee for most pet owners. Our own personal choice is Genricpet as they have a ‘no limit’ policy and their rates are comparable to the rest of the industry. To find out the questions and things to look for in a Medical Insurance, please just follow this link”
​

On average the German Shepherds lives between 12 and 14 years but as with most large breeds anything over the age of ten is a gift.

2.       Use only positive reinforcement methods for training.

3.       Start socialization and obedience training as soon as possible and continue training for at least three years. One or two months is definitely not sufficient.

2.       Never play rough and tumble, wrestle games. You are not a litter mate and this makes them retaliate as if you were.

3.       Don`t separate them from the family by making them stay outside at night.

4.       German Shepherds are good with children but should always be supervised if a strange child is visiting.

As early as 1882 the first German sheepdogs were being shown in Hannover but it was only in 1892 that the Phylax Society was formed and they concentrated on the development of the German Shepherd breed.

German Shepherds and Alsatian are one and the same breed. After the war, soldiers returned and were full of praise for these military dogs that they had seen. Calling these dogs German Shepherds was not popular so they were called Alsatian Wolf dogs. Alsatian, as some had been imported from Alsace-Lorraine and Wolf dog because it resembled a wolf. However the name Wolf Dog was soon dropped as that had just as bad images as the word German. Breeders have now reverted back to the name German Shepherd.

This is one, if not the, most versatile of breeds. They were originally bred to guard the flocks in Germany but as the number of flocks declined new uses were found for them.

They have a superior intelligence, almost human like, and are easy to train. German Shepherds are recognised worldwide. They are used in the police force, army and security forces and they are trained as guide dogs, rescue dogs, detection dogs(sniffing out bombs and drugs), and they are still used for sheep herding. (The current reigning champion, for sheep herding, at the prestigious Crafts dogs show is a German Shepherd.)

Besides all of their achievements, German Shepherds make wonderful family pets.