Please visit and LIKE our Facebook Page and share with family, friends and on your own Facebook page, and ask them to share further – it is only by working together and sharing knowledge and education that we can improve the lives of dogs and assist owners. We do not inundate you with posts – an average of 5 per week, and the odd Did You Know and General Post. Thank You!
Four Wheel Phobia​

by David Appleby - www.apbc.org.uk
(A brilliant website full or articles by professionals -well worth a look) 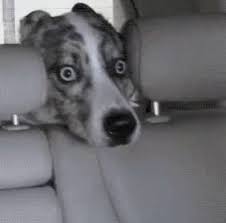 Does your dog dread a spin in the saloon so much that he refuses to get in? Or is he a poor traveller that braves the torments of the road?

Some dogs just don't want to get into the car at all and this can be for a number of reasons. Fear of travelling is one of the obvious ones. This is not normally the result of an incident, like a road accident, but more commonly because of a negative association with car travel, like being sick. If a puppy learns this association on one of its first journeys it may stay with it - causing apprehension about getting in a car in anticipation of being sick again, even in adulthood.

Sometimes the fear doesn't result from a learnt association, but from a simple lack of experience. Owners are often advised to keep their puppy at home until its vaccinations are complete, which can lead to all sorts of problems - one being that the owners don't bother to take their puppy in the car because they don't intend taking him out at the destination.

Consequently the puppy's first experience of the car (apart from the initial journey home from the breeder's , which can be traumatic anyway) comes quite late in the development of its ability to cope with the world in general; suddenly it's put in a small room that not only moves but accelerates, stops without warning and throws its contents from side to side!

Of course, some people have little reason to put their dog in the car because they exercise it close to home; as a result, the associations the dog develops can be negative ones - such as trips to the vet for injections.

To overcome a dog's fear of getting into the car, try to make the process into a game which the dog will enjoy - even if it takes a little bit of persuasion. But you'll need to be determined not to give up!

Start by opening the two rear passenger doors so that, to the dog, the car looks like a tunnel. With your dog on a lead, climb in and don't look back; there will come a point at which the lead tightens because it refuses to move, but keep the tension on the lead by pulling gently, i.e. not so hard as to drag your dog, and remain absolutely silent.

As a result of your efforts to get out of the car on the other side, your dog will eventually have to get in. When it does, continue to look the way you are going but lavish it with lots of praise. When you climb out your dog will follow you. Run round to the side you first got in and repeat the process over and over again. Who needs a Jane Fonda workout?

Your dog will gradually become so excited about this new game that it will start to jump in before you - at which point you can take longer and longer breaks, sitting on the back seat and giving lots of fuss. If you have a hatch back or estate car, put the back seat down, open the rear door and change the game to one where you get in the side of the car and out of the back - and vice versa. Rest periods are now taken in the luggage compartment!

By the time you have worked off a few pounds, your dog will be happily getting in the car. This can be reinforced by feeding all its meals in the car for the next few weeks, initially with the engine off and ultimately with it running - though don't attempt to drive if your dog has recently eaten, as it may cause it to be sick.

So now we have a dog that's happy about getting in the car, but how can we get it to enjoy travelling?

The majority of dogs who are anxious about car travel never get to the point where they refuse to get in one. They will however, pant anxiously throughout the journey and even salivate copiously, which is a physiological response to anxiety, as is vomiting.

What if the vomiting is a physical response to the movement of the car, in the same way as sea sickness is induced by the movement of a boat? In this case the nausea is triggered by the movement of fluids in the inner ear. If this is the problem, medication may be required. If you suspect that travel sickness rather than anxiety is the difficulty, it would be wise to discuss the matter with your vet. Once a successful treatment has been found, taking several long journeys in quick succession often works.

If your dog's distress is caused by anxiety, a different approach is needed. If the condition is severe your vet's help may be necessary either for anxiety reducing drug support combined with the programme of counter conditioning they advise and/or by referring you to a behaviour counsellor such as a member of the Association of Pet Behaviour Counsellors.

If the condition is not severe you can try and help your dog overcome its problem on your own. The objective is to develop a pleasant association with car travel. Aim for short journeys that end somewhere your dog enjoys - a park or the countryside, for example, on the outward journey, and home to a portion of its daily food. It's crucial that the journeys increase in length slowly, which may mean driving your car part of the way and walking the rest on the way out and vice versa on the way home.
In time, distances can be increased and, obviously, the more time and effort put in, the quicker the results will be. Happy driving.