To find out about this amazing modality do contact the TTouch offices on info@ttouch.co.za 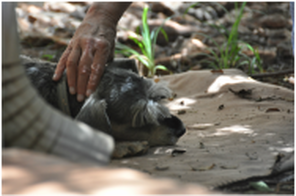 There is seldom a day that goes by where I am not astounded at the difference that even a little bit of TTouch can make in a dog’s life to lower stress levels, overcome behaviour issues and help a dog to learn how to trust and overcome fear – I really do believe that this is a modality that each and every pet owner should learn the basics of – regardless of what type of pet they have – TTouch makes a difference in all animals, and can also be used for human.

Whenever I receive an email from a client telling me about the enormous changes that had come about in their dogs, it gives that flow in your heart knowing that you have been able to make a difference in a dogs life.

You are going to see for yourselves what a difference this wonderful modality can make – not just with the shelter dogs, but with your own dogs as well, so I decided to share with you on of the cases that I worked on, that really touched me.

It is not for nothing that TTouch is known as the Touch that Teaches Trust. Pippa’s story is that she was one of the Roodewal Schnauzer dogs that had been living in simply horrendous circumstances. It was due to the sterling work done by Deborah Blane and her team from Schnauzer Friends that so many of these dogs were saved and placed in loving homes. However, the conditions they had been living in belies belief, and to say that the majority of dogs had fear issues was an understatement – some of these dogs, Pippa being one of them, could not be touched and would not interact with humans in any way at all – they were simply petrified.

I was very fortunate to be asked to help with these dogs and Pippa was one of them.  Pippa had found a safe place outside the kitchen door and spent all her time there. She was suspicious of treats and they had to be tossed towards her, she would not approach at all.  She would wander about if nobody was around, however the second she heard humans approach, she would dash to her safe place and hide – she had absolutely no trust in humans at all. On the few occasions where she had to be cornered and picked up to go to the vet or groomed, she was understandably besides herself and totally shut down.

It was impossible for me to do any TTouches on her the first time I met her, however using dog’s calming signals I did manage to get her to approach me and take treats a few inches from my fingers and managed a quick touch below her chin. I showed her new mom how to do this as well as what we call ‘air touches’ where we would stroke the air close to the dog but not actually touch the dog – this often helps a nervous dog overcome the fear of first being touched as these touches impact on the energy field around our bodies.

On my second visit to her, she had improved and was spending more time in the home, had started interacting with the other dogs, would approach and take treats from her new mom, but still actually being touched was something she would not tolerate.

As she had been groomed a few days before, she had regressed a bit and would not take any treats from me at all. Everything in my body was telling me to push her out of her comfort zone and touch her, however this was not going to be an easy thing to do.

As in the pictures below, I sat myself as close to her as I dared and stretching my arms and body to their limits, I did a combination of utilizing dogs calming signals, tossing treats, air touches and crooning softly to her. In a relatively short time I was able to actually start to touch her and she quickly relaxed and the last picture show me relatively close to her and happily taking treats. Now came the hardest part of TTouch – stop while you are ahead!  This leaves the animal in a situation where stress levels have been reduced and the animal is much more likely to take a little time to absorb these changes and then come to you and ask for more work.
I called it quits for the day and showed her Mom how to do the TTouches.
The email I received from her devoted mom who has been incredible in helping this lovely dog to overcome her fears, left me in tears, and once again I am amazed not just at the power of TTouch but at the immense ability of dogs to forgive and learn to trust and to give and receive love: -
“I have continued with TTouch at least once (sometimes twice) a day and she really does enjoy it. The duration has gotten longer by a few minutes already.
This week I bathed her and she tolerated the picking up fairly well, but it was stressful for her. Luckily with the very short cut it is over quickly and she can air-dry. Immediately after the bath I called her for a treat and she came without hesitation so I think she coped well.
Today my daughter was lying on the dog’s pillows and cuddling Storm. Pippa heard this and came in and stood within easy reach, also wanting attention! Katja put out a hand and started scratching her cheek, head and ears and she stayed and allowed it, even seeming to enjoy it. Needless to say, we are thrilled!!
I have so many more examples such as above, and what touched me so much was how animals are prepared to trust us again no matter what they have been through,  and to take that huge leap and overcome their fears. What also warms my heart is the love, dedication and commitment that the people that adopted these dogs, and others like them, and how they have helped them to overcome really serious problems – I salute you all and it is people like all of you and people like Pippa’s mom, that make our world a better place – thank you!