Please visit and LIKE our Facebook Page and share with family, friends and on your own Facebook page, and ask them to share further – it is only by working together and sharing knowledge and education that we can improve the lives of dogs and assist owners. We do not inundate you with posts – an average of 5 per week, and the odd Did You Know. Thank You!
Drooling - Why does this happen?
​
www.peteducate.com - this website has an amazing selection of articles and knowledge on just about every variety of pet you can think of! Enjoy 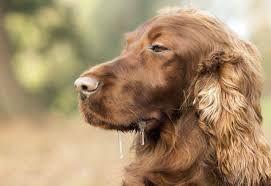 A dog drooling around other dogs is an automatic, impulsive response to their emotions. These emotions could be positive, negative, or somewhere in between.

Nevertheless, for the most part, drooling is considered a normal response and not something that usually signifies something is wrong.

Salivation is simply a response to external stimuli, and in this case, the other dog is the stimuli.

It naturally follows that the higher a dog salivates, the higher they are experiencing the emotion.

And, of course, some breeds of dogs are more prone to drooling than others.
For instance, we all can relate to that image of a Saint Bernard or Bloodhound with excess drool around their mouths.

Nonetheless, drooling can be experienced by all breeds.
And it is more common around other dogs. And this is generally when and why:

Anxiety in dogs is common, particularly when they are put in a new situation or do not know what is expected of them or how to respond.

Besides, we all need to experience things several times to build our confidence.
The same can be said for dogs.

Dogs that have not spent a lot of time around other dogs, perhaps they are still young, maybe they have not had the opportunity to meet other dogs very regularly.

Either way, meeting new dogs can cause anxiety in your dog.

Especially if they are particularly unfamiliar – such as encountering a new breed or one that behaves in a particular way.

And drooling is merely a response to this unease.

There is also the chance that your dog is scared of other dogs, or perhaps distinct dogs or breeds, in particular.

This can happen around much larger dogs or even those who act in a certain way.

Nevertheless, your dog may be fearful of the dog or the interaction.

A fearful response will often see other behaviors in your dog, such as growling, pulling back, or even baring teeth.

Drooling in dogs is not always an unfavorable response; sometimes, it can indicate excitement and happiness.

This commonly happens in more socialized dogs or those that do better in the company of others.

Perhaps they have seen other dogs running around or playing.

Drooling here often means they just want to get a little closer or even get involved!

Unfamiliar or Scents of Food

It comes as no surprise that they use their noses to perceive the world around them.
​
And just because we are at the park does not mean that food or other scents cannot be picked up.
It could be a picnic, somebody on their lunch break; either way, your dog may actually be drooling over the smell and not of other dogs (even if they are present).

Illness
Lastly, it could very well be that your dog is sick or suffering from a health condition.
While it may just be something as temporary as motion sickness from any traveling you did just before or running around excessively, it could indicate something more severe.
If you notice excessive saliva that continues long after interactions with other dogs; its time to consult a vet.

When Should I Worry About My Dog Drooling? Drooling should be a cause of concern when it is excessive, gets worse than usual, or is accompanied by other problems, such as excessive panting, lethargy, avoidance of food, etc.

However, it is important to note that some drooling is to be expected in dogs, and some breeds will drool quite a lot naturally.
First and foremost, you will need to identify the potential cause of drooling and how long it goes on.
We’ve covered drooling around other dogs here today.
Well, you have various responses here depending on the emotional cause of drooling.
For instance, if drooling appears due to excitement and happiness, and there are no other signs of concern, then there is nothing you need to do.
However, if you notice that drooling is accompanied by other stress or anxiety-related behaviors, and drooling does not reduce around other dogs in time, you may need to intervene.
Taking them to a vet at this juncture is advised.
That way, they can run multiple screenings and tests to identify what may be going on.
Some vets will provide anti-anxiety drugs, whereas, in the case of something more severe, they may receive some other form of medication.
Then there are animal behavioral specialists you may want to consider working with.
These can help your dog adapt to stressful environments with certain techniques and build their confidence over time.
Nevertheless, if you discover your dog is drooling and there is no medical reason for it, there is generally little you can do.

It may reduce in time and with greater exposure around other dogs. It may not.
But if they are otherwise fine and well, it should not be a cause for concern or worry.
And if they are unfortunately poorly for any other reason, they can be treated accordingly