​www.ckcusa.com
(Continental Kennel Union - great site - do visit)
Earlier this year (2017), researchers in China made headlines for a new advancement in bioengineering: a pair of dogs genetically engineered for strength.

The experiment is controversial, drawing criticism from animal welfare groups around the world, but the researchers involved in the project believe their work may be instrumental in the fight against disease.

Two beagles—a male named Hercules and a female named Tiangou—were conceived in a lab, and along with sixty other dog embryos, their DNA was edited so that the myostatin gene, which limits muscle growth in animals and humans, was erased.

This procedure involved advanced technology that allows scientists to alter the genetic material of embryos. Of the sixty canine embryos used in the experiment, only Hercules and Tiangou completely lacked the myostatin gene. As a result, both dogs were born larger and stronger than average puppies, with double the muscle mass of the average beagle.

So, what does the world stand to gain from super-strong dogs?

Professor Xiang Gao and his team of researchers at Nanjing University believe that stronger canines could be useful for hunting and military service. They also theorize that their myostatin experiments could lead to cures for human diseases such as muscular dystrophy and Parkinson’s disease, which can cause loss of muscle mass, strength, and control.

Gao and others are exploring the possibility of working with the myostatin gene to prevent muscular conditions in animals and humans, and, in an interview with CNN, Gao stated that it was possible for humans to be genetically modified to enhance athletic skills and make them better soldiers. Chinese researchers have already altered human embryos in an attempt to cure beta thalassemia, a blood disorder.

Still, he and his team have encouraged the public not to jump to any conclusions, stating that these gene editing procedures will need to be tested extensively in adult humans and animals before any widespread alteration of human genetic material can occur.

For now, the team is continuing to observe Hercules and Tiangou, who will be bred to determine whether or not their strength mutation can be inherited by future puppies. Researchers also want to continue engineering dogs with DNA mutations, with a focus on creating canines with conditions resembling muscular dystrophy and Parkinson’s disease, so that potential cures can be tested on them. As of right now, it appears as though none of the genetically modified dogs will become household pets.

Gao’s study has raised serious ethical questions in the scientific community and received some harsh criticism from animal welfare groups, such as Animals Asia.

David Neale, the director of the Animal Welfare department of Animals Asia, expressed the group’s opposition to these types of genetic experiments, specifically in regard to “the raising and killing of a large number of animals to create an individual which suits the needs of the research project”—referring to forced in-vitro fertilization, which is how Hercules and Tiangou were born.

During this process, many embryos may be lost, and Animals Asia opposes these and other invasive surgical procedures. Neale also criticizes genetic engineering for being “relatively inefficient” and “unpredictable,” since it is difficult to anticipate how changes to animals’ DNA will affect them physically and behaviorally.

Many genetic experiments also involve surplus animals, a practice in direct violation to an internationally-accepted concept in animal testing, the three Rs: refinement, reduction, and replacement. This concept involves refining procedures to minimize animals’ stress or pain, reducing the number of animals used in experiments, and finding alternatives to animal testing whenever possible. Finally, Neale claims that these experiments in genetic engineering do little to promote empathy and respect for animals as sentient individuals with their own right to live a life free of suffering, and [have] the potential to encourage the view that such animals are ‘tools’ for humans to use for our benefit.
​
While the processes involved in Gao’s research are highly unnatural, it is worth mentioning that the myostatin gene can sometimes be erased naturally, without the help of bioengineering technology. This has been observed in whippets, the only dog breed so far to exhibit this phenomenon. 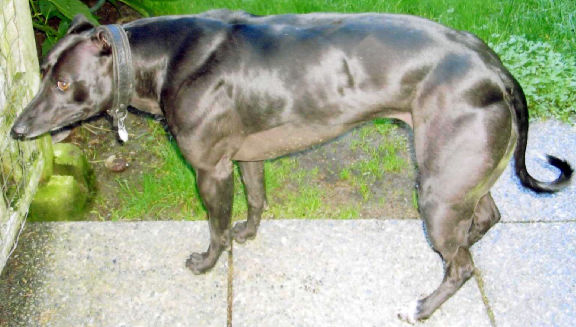 By PLoS genetics [CC BY 2.5], via Wikimedia Commons
The whippet is known for its slim build, but bully whippets, as these mutated dogs are called, have double the muscle mass of an average dog. The most well-known bully whippet is Wendy, a female black whippet who was featured on Animal Planet.

Bully whippets have normal lifespans, and this mutation has been proven to be inheritable, but because bully whippets look so unusual and cannot be used in racing, they are usually not bred intentionally. Mice and cattle also lack the myostatin gene in some instances, and Belgian Blue cattle are bred intentionally for their large amounts of lean meat. In rarer instances, humans have also been born lacking the myostatin gene, often succeeding as circus performers or bodybuilders.

​
In their quest to learn more about the differences between Hercules, Tiangou, and unmodified beagles, Gao and his team hope to unlock the full potential of the myostatin gene. With the data gained from their experiments, the researchers may soon determine whether canine genetic engineering can also translate into scientific breakthroughs for humans. However, with increasing pressure from international animal welfare movements, along with concerned governments and members of the public, medical researchers may experience difficulty moving forward with these types of experiments in the future.