DO YOUR PRAISE YOUR DOG FOR DOING NOTHING? YOU SHOULD!

www.kathysdogtraining.com - a great site with interesting articles - worth a visit
KATHY KOPELLIS McLEOD
When was the last time you told your dog it’s good for doing nothing? You’ll be surprised how simply acknowledging your pet for being calm and inactive can help to keep it on its best behaviour 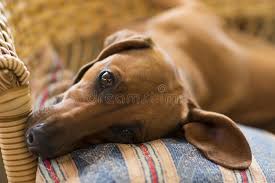 ​WHILE the concept of reinforcing your dog for doing nothing may sound novel, the results will leave their mark in your dog’s behaviour. As strange as it may sound to some, this important component of training your dog cannot be underestimated.

Here are some areas you can start on:

DON’T TAKE YOUR DOG FOR GRANTED

If you’re always taken for granted and fail to be acknowledged, there’s a risk that you’ll begin to lose your enthusiasm to repeat the behaviour in question. The same can be said for your dogs when you fail to regularly recognise and acknowledge them when they’ve behaving well, particularly during challenging situations when they would normally react.

When you consider the potential consequences of ignoring the “absence of bad behaviour” you’ll allow misbehaviour to occur right under your nose. This initiative is really eff ortless and is one of the best pieces of information you can provide your dogs to shape their overall behaviour.

This exercise probably tops the list when it comes to owners taking their dogs for granted by off ering little or no acknowledgment for their responses. At fi rst the dog is recognised for returning when called, followed by food rewards and enthusiastic praise. As time passes the dog has an impressively reliable recall, but herein lies the problem – the owner taking this most important behaviour for granted isn’t as responsive and giving. Now the dog fi nds other stimuli in its environment more interesting than its owner’s far from enticing and receptive behaviour and it either ambles at its own pace or avoids its owner’s disgruntled gestures to return.

Additionally, the dog is put on a lead and taken home under the guise that the fun will end because it was misbehaving, which isn’t the case at all and only consolidates poor responses. This is bad training. It makes total sense that the quality of its response would diminish to some extent. It’s so easy to tell it that it’s good simply for hanging around you and checking in from time to time.

Consider all the times your dog could react in a situation, but you help shift its thinking because of simple acknowledgment of it opting to do nothing in that situation. There are many common scenarios in which you can reduce and even eliminate bad behaviour by telling your dog it’s good for doing nothing.

Here are a few actions to keep in mind – you may have some pertinent to your own dog:
If your dog reacts in any of these scenarios you will be a very pleased owner when it doesn’t, thanks to your quick thinking of it doing nothing. We often tend to react after the dog has moved so, instead, act before the bad behaviour occurs and you’ll get more of what you want – and so should your dog, if you’re a good trainer.

This process works very well for the “attention-seeking” dog that loves to steal forbidden items in order to engage your attention. If the only way it can gain your attention is to get up to mischief, the smart dog will engage in such behaviours because it gets the desired result.

Consider telling your pet that it’s a “good dog” for chilling out, lying down, sleeping, leaving items alone, etc. You get the idea? Can you see how acknowledging dogs for doing nothing can reduce and eventually eliminate this unwanted behaviour? It makes sense that the behaviour that gets reinforced will be repeated and the behaviour that isn’t having an effect any longer will eventually taper off because it’s not having a desired response.

THE SECRET TO GOOD TRAINING

Good timing and good reinforcement are the secret to good training. As simple as this concept sounds, you will have much infl uence over your dog’s behaviour by using these two vital tools.

Timing in dog training is critical, so ensure your reinforcement is given when your dog is simply doing nothing and not when it has moved and engaged in inappropriate behaviour. Using reinforcements smartly will strengthen and maintain behaviours. Avoid sloppy delivery of reinforcements – you may be rewarding the wrong behaviour.

In addition, really get to know what reinforcement your dog wants, because the wrong choice will not be as eff ective. For example, you may choose to give your dog a food treat, but what your dog really wants is its ball. Good focus comes hand in hand with good reinforcement.

In applying the above principles you will begin to see change for the better in your dog’s behaviour where it may be lacking manners. Your dog is certainly worth giving this fun concept a go and you can marvel at the changes you’ll see simply because it is doing nothing!