​Dr. Dunbar chats with Moose (better known as Eddie — the Dog Star on NBC’s Frasier) and his trainer Mathilde Decagny at the Association of Pet Dog Trainers Annual Conference in San Diego. Extracts of this dialogue were previously published in The Bark magazine.
​www.dogstardaily.com 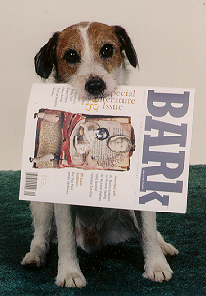 MD: Eddie has his own personality. I got him when he was about two years old and he was a terror…a tyrant…selfish, mischievous and with lots of negativity.

ID: What sort of things did he do?

MD: Constantly trying to escape and get away, chasing squirrels, getting into trash and dog fights. His recall was nonexistent? I could never get him to come back to me. And I wasn’t the first one that had tried. He would pee everywhere and he was just very, very…

ID: He sounds like a normal, human film star.

MD: Absolutely! But he’s changed so much throughout his life. He’s now nine and he’s a different dog…interested in training, and he loves the idea of being busy, of doing something. He has always been very impatient. No patience whatsoever. It was always Eddie, Eddie, Eddie — right now, right now. So through the years I taught him to be more patient and to be a little nicer with me. Originally he was extremely independent and really couldn’t care about being petted even. He had owners before me who just couldn’t cope with him because there was never really any giving on his end.

MD: Now he’s very affectionate. I could tell this petting thing wasn’t doing it for him. The grass was always greener on the other side. So I spent a lot of time massaging him, and that he tolerated. Then he thought it was kind of cool. I could tell he really relaxed and was getting something he liked that was mellow. And I started to be mellow with him. At first, I was like, you know, “Come here! Down Stay!” trying to be above him and then, I reversed everything — reverse psychology. For him this is what worked. And he became less hyper, more attentive and much more affectionate.

ID: How did you deal with his recall problem?

MD: I have to be honest with you, I still don’t trust his recall. I would never take him on a hike off leash. This is going to sound really lame, but what I do is I put him on a 30-foot long leash so I make sure he gets exercise. I can leave the lead on and let him drag it and, I carry treats. He’s really food oriented so that really helped. Instead of calling him when I felt like it, I would just wait until I had a connection — eye contact…and then say, “Come on” and give him a treat. Now he comes pretty reliably. But I still don’t trust him.

ID: Very realistic. People who trust their dogs implicitly are going to have an accident.

MD: Yes, you know, I get upset. I have another Jack Russell that goes horseback riding with me and hardly ever has a problem with his recall. He’s right there. But with Eddie… he’s my black sheep. But if you have a method for me…
​
ID: Well, I think you said the most important thing: NEVER to fully trust any dog when offleash. There’s eventually going to be a time when the dog doesn’t respond that’s when accidents happen. In terms of training though, I think the biggest mistake people make is letting their dog off-leash to run and play and have uninterrupted fun on his own and then try to catch him half an hour later. I would ask the dog to “Come” or “Sit” every minute or so, praise like mad, offer a piece of kibble or two and then let him resume playing — to try and integrate short training interludes and dinner time within the offleash play session. But look, I am meant to be interviewing you! Once I saw Eddie lift his leg on Frasier. How did you train him to do that on cue?


MD: This is one of my favorite tricks that has almost become my trademark, because I train all my dogs to do it. And people love it.

ID: What a truly amazing thing to be famous for — training dogs to hike a leg and take a leak on a person. You must have a lot of friends.

MD: Hmmm. Well, I also train my dogs to sneeze on cue but people get a bigger kick out of the leg lift and actually, its pretty easy to train. I start off by walking him very close to an upside down apple box, so that he has to step on it. I tell him “Hit it” and every time his back leg is on the box, I praise and give a treat. That comes really fast and then I praise only when he stands with one back leg on the box and the other three legs are on the floor. Basically he is learning to touch the top of the box with his back leg. Once he has a good hint of what’s going on, I lean the box against a wall, so he has to lift his leg higher to touch the top. Once the dog knows to lift his leg to put it on something off the ground, I try it without the box and reward him when he lifts his leg. Most dogs pick up on it fast. It’s actually a pretty easy trick to teach.

MD: Moose is fine about his dual personality, because although he always relates to Eddie on the set — he knows it’s related to him, he always looks to me for “Moose-commands” and hand signals. So if they say, “Eddie come” he knows he’s not supposed to come if I give him a stay signal. Nearly everything I do has to be silent — with handsignals. I cannot be talking and I have to be at least 10 or 15 feet away since the cameras are covering everything.

ID: And the camera crew doesn’t like second takes, I presume.

MD: No, there are no second takes. So we can’t really make a mistake.

ID: Do you think Moose knows that he’s acting when he plays Eddie?
​
MD: Well he definitely knows “Action” and “Cut” and he knows when it’s Tuesday — the day we film.

ID: I’m glad you told me what Eddie is really like. He is so well behaved and calm on Frasier that people might think that all Jack Russells are that way.

MD: I do my best in every interview, every dog show, every place we go, to explain: What you see is not always what you get. And what you see is a lot of hard work on my part.
ID: He’s an actor right? All they see is his acting — a well-trained actor playing his role. Tell me about his new motion picture. What’s it called?
​
MD: He has one coming out called “My Dog, Skip” and it’s a movie in which his son plays young Skip and Moose takes over as the older Skip. It’s a true story written by Willie Morris. It’s a very, very sensitive story about a kid and a dog growing up together. And this kid is lacking confidence — not liked by other kids — and having trouble playing sports. Finally he gets a dog and the dog helps him tremendously in so many ways. It’s just what any kid would dream of — growing up with a dog and having this wonderful relationship. They have games where they outsmart everybody with Skip alwaysshowing the way. It’s very touching…very sensitive and nice.

ID: How did you teach Eddie to drive?

MD: How did you know Eddie drives?

ID: Oh, I heard lots about it.

MD: He was so good about it. He just sat there and I got my truck and we moved it back and forth. I was right there down below with him and told him to put his paws on the steering wheel and then I added steering wheel movement. I tried my hardest to make it look real.

ID: Will he be taking his test soon?

ID: Tell me, who are Eddie’s favorite actors? Who does he like working with the best?

MD: You know, they are all really good in their own way. Jane, who plays Daphne, is very kind. Obviously Frasier constantly has to yell at Eddie on the set but in real life he is so sweet. Perry Gilpin, who plays Roz, has one of his puppies. They all really love Eddie and when we do a show they all come up and say, “Good job” and how good he is. But he is a hardworking little dog and I must say he doesn’t mess around too much.

ID: When Frasier has to shout at Eddie on the set, does Moose still like Kelsey afterwards?

MD: They’re fine. But I have to make sure Moose doesn’t have any hard feelings.

MD: I ask Kelsey to turn right around and feed him and pet him. It has to appear that Frasier hates Eddie but in real life, Kelsey and Moose are the best of friends. You know, I’ve got to give a lot of credit to the actors for taking the time to make Moose feel comfortable

ID: Moose is lucky to be with a cast like that — a lot of them are dog owners, right?

MD: Yes. Kelsey has five dogs, David has two, Perry has four, Jane has cats and they are all dog lovers. David will get on the floor and wallow around with Eddie. Eddie gets to work and the set is home — the couch…the chair. He walks around like he owns the place. He’s feels secure there. He’s made friends with all the cast and trained them to give him popcorn and stuff.
​
ID: What sort of problems does the cast have with their dogs?

MD: Their own dogs? Well, David’s dogs were jumping-up on visitors but we fixed that.

ID: What did you do?

MD: Pretty much I told him to teach them to sit-stay when greeting people. We practiced throughout the day and then, we set it up a bunch of times in succession with the doorbell ringing until they were fine.

ID: Pure simplicity! A simple sit is the solution to… what? A hundred behavior problems? Dashing out the front door, running off in the park, chasing their tail, chasing the cat, humping your leg, jumping up on visitors…

MD: Exactly! I love sharing what I have learned. I am so fortunate to be in the position of having a famous dog on a famous show. Just being part of it is such a blessing.

ID: Watching you work, it’s so obvious you love what you do, that you love Moose and that you enjoy meeting people who love meeting Moose. Pleeeease may I get a picture with you and Moose… I mean Eddie.
​
MD: “Action!”