Think of an auto-immune disease in humans and AIDS immediately comes to mind, but the HI virus which leads to full blown AIDS can  be controlled by medication and sufferers can live a relatively normal life.  This is not so with the inherited auto-immune disease, Canine Leucocyte Adhesion Deficiency (CLAD) in Irish (Red) Setters and Irish Red & White Setters.

When both parents of a litter are CLAD carriers of this dreaded condition each passes one of their recessive mutant genes to their offspring - the result is devastating. The affected pups develop multiple infections from birth as they have no inbuilt defense system. Even with medication, they lurch from one opportunistic infection to the next which inevitably results in death or euthanasia to prevent further suffering.

Desperate breeders turned to the burgeoning science of animal genetics for answers and research workers at the University of Upsala in Sweden were the first to identify the recessive gene mutation responsible for CLAD.  Based on the findings of this Swedish University the Animal Health Trust in UK launched a DNA screening programme in 1999. 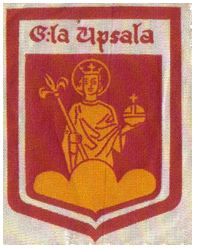 Geneticists at Upsala ,Sweden discovered gene mutation DNA for CLAD
The test results reveal whether a dog is CLEAR, CARRIER OR AFFECTED (the latter usually by post-mortem)

The greatest danger stems from unidentified CLAD carriers as these dogs do not display any symptoms of the condition and live unaffected normal lives, but if bred will pass the defective mutant gene to their offspring.   If only one parent is a carrier and the other holds no recessive mutant gene approximately 50% of the litter will be carriers.

In 2006 a concerned group of SA breeders and owners learnt that an Irish Setter had been imported from UK that was a CLAD carrier.  This raised questions about the CLAD status of both locally bred and overseas imported dogs.  As a result South African breeders joined others around the world to screen for CLAD in Irish Setters and Irish Red & White Setters, initially using Optigen (USA) Laboratories and later Inqaba Biotec Animal Genetic Testing in SA.

Meticulous records (requiring submission of Optigen Certificates) have been kept and periodically lodged with KUSA for incorporation onto their data base. At the beginning of 2012 Two hundred and three Irish Setters have either tested clear or are inherited clear by virtue of their ancestry being DNA tested with approximately forty further inherited clear pups pending KUSA Registration and eleven Red & White Setters.

Another important measure introduced to PROTECT CLEAR DOGS from breeding with dogs that had NOT been cleared of CLAD & PRA rcd 1 is the KUSA Breeders Restrictions Document prepared from a general draft by the Breeder and signed by purchasers of pups.  Basically, this states that as the parentage (ancestry) of the pup has been cleared of CLAD & PRA the pup must only be bred to a clear mate when mature, thus promoting the eradication of CLAD from these breeds.

In 2007 Kennel Union of Southern Africa approved an Advanced Registration Certificate for Irish Setters, which is only awarded to dogs that are CLEAR of Canine Leucocyte Adhesion Deficiency and Progressive Retinal Atrophy rcd 1 together with Clinical Clearance of Eyes and been X-rayed for Hip Dysplasia with a satisfactory score. Of necessity they must also be Breed Champions.

Irish Setters were the first recipients of the KUSA Health Screening Certificate, and Annexure to the Registration and Certified Pedigree in 2010 and one hundred of these have been issued. Currently three litters await KUSA Registration and each pup within these litters will be issued with their own KUSA Health Screening Certificate indicating that they are INHERITED CLAD CLEAR

REPUTABLE BREEDERS can state that they are PROUDLY SOUTH AFRICAN in clearing their Irish Setters and Irish Red & White Setters of Canine Leucocyte Adhesion Deficiency.