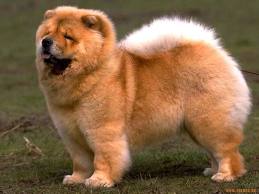 The Chow Chow is an ancient breed which originated in China and there are statues of Chows which are over 2000 year old. The exact origin is unknown, but pictures discovered on Chinese pottery which look very like the Chow Chow, date back as far as 206 BC. It is thought that this breed may be related to the Chinese Shar-Pei and origins of both seem to stem from China, and both have the distinctive trait of the black and blue mouth. Others believe it to be a cross between the Tibetan Mastiff and the Samoyed, while others say the Samoyed actually descends from the Chow Chow.

It is also believed that this breed may have contributed to the ancestry of the Samoyed, Norwegian Elkhounds, the Keeshond and the Pomeranian – in all, nobody is sure!

They were originally used by the Chinese as working dogs with varied tasks such as hunting, herding, pulling carts and sleds and as protection. Unfortunately they were also eaten (considered a delicacy) and their fur was used for making human coats!

They first appeared in England in the late 1800’s brought over by merchants. It is believed that their name stemmed from the Pidgin English word ‘chow-chow’ which was a general term for bits and pieces that were brought back from the Far East.

Another unusual feature about them is that it has almost straight hind legs, which makes its walk rather stilted in appearance.

Much has been made of the Chow’s blue/black tongue and many people believe that their dog may have Chow in it as it has blue spots on the tongue – these are just the equivalent of freckles on humans and not uncommon in many breeds. A true Chow has a pure blue (or black) tongue.

This is a lovely dog although they do tend to be rather dominant given their breeding. Due to this it is essential that they have a firm owner who will show them the do’s and don’ts of the basic House rules but with positive reinforcement methods – these dogs do not do well if more harsher methods of training are used.  Left to its own devices and without the guidelines it needs, a Chow can get out of hand very easily and can be stubborn, unruly and self willed.

They can be aloof and suspicious of strangers and can become very protective and reactive if not controlled. Due to this it is essential to socialize them well from being a pup and keep up the socialization and the basic obedience.  This is not a dog to run up and hug no matter how lovely and cuddly and huggable it looks , not just due to the natural aloofness they seem to have – they also have poor peripheral  vision – so anybody approaching them should do so from the front and approach in a slight curve announcing their arrival and offering treats. Once they know you they are much more relaxed and more likely to interact, but this will be of their own choice, - they are naturally aloof dogs and one should never force a chow (or any other dog for that matter) to interact if it does not want too.

They make excellent watchdogs and are very protective.  They are intelligent dogs and do well inside the house, so do not require a large garden, although daily exercise should always be supplied to stimulate the dog physically and mentally and to keep the weight down.

On average they are normally ‘one person dogs’ and will bond strongly with their owner and other members of the family, but even with their own ‘people’ they can be reserved. However, they have wonderful patience and regal dignity are easy dogs to fall in love with.

This breed is not for everybody, but for those that love and appreciate the breed there is none better.

Only from a KUSA registered breeder or a breed club affiliated with KUSA.

Do they get on well with children and other pets?

In general, Chow Chows are not the best dogs for families with children but if they are well socialized to children as a pup, and there are children in the home when the pup arrives, there is not normally a problem. Where a child coming into the home where there is already a Chow, problems can occur as the Chow bonds very much with its owners and may not welcome the addition of a baby, especially if the dog has not been exposed to children and babies in the past. However, if the basic House Rules are put in place and the Chow is well mannered and obedient and the owner is patient and does the necessary introductions in the correct manner, then this could be successful – this will take time, patience and consistency.

If a Chow has been well socialized it is easier for it to get on with other dogs, especially if one is already in the home and the Chow is brought in as a pup and the existing dog is of the opposite sex and more or less the same size. They can become very reactive to dogs of the same gender, so your ideal match is one male and one female.

It is definitely not suitable for homes with cats or other small animals as his strong instinct to hunt will take over. For this reason, he should never be let off leash because he may attack any other animals in his immediate vicinity.

Do’s and Don’ts of this breed

The Chow Chow has some health problems that can be a concern, especially if you aren't careful whom you buy from. They include hip and elbow dysplasia, patellar luxation, autoimmune thyroiditis, and eye problems such as cataracts, distichiasis and glaucoma. Stomach cancer and bloat are also seen in the breed. To help to prevent bloat, feed 2 - 3 meals per day rather than one large one. No excessive exercise 1 - 2 hours before feeding and an hour after.

“In today’s age, with the rising cost of veterinary care, it really is a wise decision to consider medical insurance for your pets. Depending on the plan you choose, you can ensure that if your pet does develop one of the health issues the breed is prone too, that you will be covered –additionally, just knowing that any accident your pet may have will be covered, will out-weigh the monthly insurance fee for most pet owners. Our own personal choice is Genricpet as they have a ‘no limit’ policy and their rates are comparable to the rest of the industry. To find out the questions and things to look for in a Medical Insurance, please just follow this link”
Grooming and Training

Not optional. Given this breeds natural guarding tendencies and being very self willed, training must be done. However, the method of positive reinforcement is the preferred method. The breed can be very stubborn and training requires a lot of patience. They are not stupid dogs by any manner of means, they are very intelligent, rather the process is done at their pace rather than the owners.