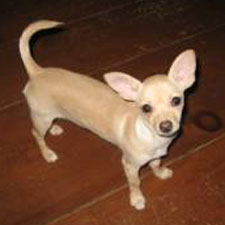 The Chihuahua appears to be the oldest breed on the American continent and its origins are from Mexico. A wheeled dog toy that has been dated back to 100A.D. from  TresZapotes in Veracruz, Mexico, shows a dog identical in size and appearance to the modern ‘apple head’ Chihuahua. This would suggest that the breed was already in Mexico 1400 years before the first Europeans arrived.

Nobody is certain which breeds were used to breed the Chihuahua, but many have suggested that it originated from the Fennec Fox, which if you look at this insert you will see that there is a resemblance. The Chihuahua is the smallest breed in the world and according to Guinness Book of World Records in 2012, a Chihuahua called Bebe, is the smallest, weighing in at 2.5 pounds and 6.5 inches in height! The coat can be short, long and wavy or flat.

Despite its small size, this little dog is known to be extremely courageous and strong willed. When you are not at home, they become great watch dogs, barking at any sign of a stranger.  Due to this, and despite its size it needs a firm owner who will teach it, using positive reinforcement methods, the basic House Rules and what is and not allowed.

They are very loyal and become attached to their owners so teaching the dog to be independent is important. They are clever and will learn quickly and are very loving dogs. Just because this dog is small does not mean it should not attend puppy school and receive basic obedience – it is even more reason why it should. There seem to be more cases of reactive behaviour from the smaller breeds than the bigger breeds and this is because owners see them as toys rather than the dogs they actually are. This tiny breed can become quite reactive!

They are not always easy to toilet train, so start training as soon as they come home and be vigilant and consistent. If a problem does develop on the toilet training side, the use of a crate for night time training can be considered.

They can be picky eaters, so if your pup does not want the food put down, do not immediately give it a piece of chicken or similar – wait a bit – pick up the bowl, and try again later. They are also prone to becoming overweight and this can place a strain on their small bodies and legs and should be avoided. As this breed has a high metabolism it is prone to low blood sugar, so what it eats and the amount it eats should be discussed with your vet.

Only from a KUSA registered breeder or a KUSA affiliated breed club.

Do they get on well with children and other animals?

Simply put, Chihuahua’s and children do not mix, especially small children! They are much like children themselves and do not have tolerance for children in general, especially when the bond between the dog and owner has become too strong and the dog can  become ‘jealous’ or try to resource guard their owner. Given their strong will and character they can react in an inappropriate manner.

If the child is over about 11 yrs and is taught how to interact with the dog from being a puppy, then this is a different situation. This makes Chihuahuas excellent pets for people who have older children or no children, however, from a pup the dog should be well socialized to younger children to avoid any problems in the future.

Additionally, given their small size they can easily be hurt by being hugged too hard, or being dropped by a well meaning child or even kicked accidently by a running child. Given that the majority of Chihuahua also have a soft-stop on top of their heads due to incomplete closure of the skull bones (moleras), this makes them even more prone to be injured. With most dogs this should close by about 6 months, but with all.

The Chihuahua can get on with other dogs and pets is raised with them as a pup and if the other dog is not a large breed as one snap from a larger breed can do serious harm, as can rough play. This breed does not seem to realize its own size and will retaliate as if a much larger dog and will not back down.  They do not do well with Terrier breeds in general as they have the Terrier like temperaments themselves.

In general if another dog is to be considered it should be another Chihuahua, especially of the opposite sex.

Where cats are concerned, if raised with one from a pup, this can work, but one should bear in mind that Chihuahua have protruding eyes and a scratch from a cat can do serious damage.

Chihuahua can be born with either short or long coats. This variation in coat type is a unique fact about Chihuahuas. The short-haired Chi requires little grooming but will need a wardrobe to help protect her from catching chill. The long-haired Chi does need regular brushing to keep her coat free of mats and tangles.

A fairly common trait found in most Chihuahua’s is a type of choking/coughing which occurs with over excitement or rapid exercise. This is caused by the soft palate falling over the windpipe. Most vets recommend gently massaging along the throat from chin downwards to relax the dog. Do check with your vet how to do this, but please note this should only occur due to the circumstances mentioned above – if it occurs when dog resting then a check up at the vet is called for.

Another factor to bear in mind is that as these breed has protruding eyes and due to their small size they are very close to the ground, this can lead to eye problems due to foreign objects in the eye – vet care should be sought. Chihuahua’s are subject to a genetic disorder called Hydrocephalus. This is a condition where there is excess fluid on the brain which causes the head to be larger than normal. Another condition the breed may develop is Hypoglycemia - low blood sugar. These dogs have a very high metabolism and if not fed properly or often enough can suffer from low blood sugar.

Chihuahuas are also prone to epilepsy and seizure disorders.