Niki and Kay run Puppies in Balance Puppy School in Bryanston/Sandton and are one of our recommended puppy schools. CLICK HERE to find out more about them. 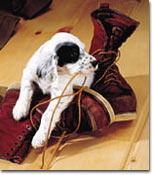 Puppies chew and learn by putting things in their mouths. They teeth until about six months of age and chewing helps teething and relieves sore gums.

It’s normal for a puppy to chew on the kid’s toys, furniture, shoes, shrubbery, irrigation systems etc. Your puppy won't magically "outgrow" these behaviours as he matures, you need to teach him which ones are acceptable and which aren't. Your puppy will, inevitably, chew up something you value. This is part of raising a puppy! You can, however, prevent most problems by taking certain precautions and managing the situation.

Start by puppy-proofing your house. Get down to puppy’s level. Lie on the floor and look around you. Look for loose electrical wires, computer cords, open shoe cupboards, other cupboards containing poisons or anti freeze, low coffee tables and toy boxes - anything puppy can get into or at, that could be hazardous.  Put the rubbish bins out of reach and filled rubbish bags up high. Encourage the children to pick up their toys and don't leave socks, shoes, glasses, briefcases, cell phones or TV remotes lying around within your puppy's reach.

If you catch puppy chewing on something he shouldn't, interrupt the Behaviour and offer him his chew toy instead. Praise him when he takes the toy in his mouth. Don’t give puppy your old shoes, socks or old toys to chew on, he can’t discriminate between new and old, and will chew on your new shoes, or the kids other toys if they are lying around.

Make sure puppy is getting enough exercise. Puppies left alone will amuse themselves so have lots of appropriate chew toys for him. Change the toys often, put out four or five toys for a few days, then pick those up and put out four or five different ones. Experiment with different kinds of dog toys. When you introduce a new toy to puppy, make sure he can’t tear it up and swallow the pieces. Look for toys that can be stuffed with food, like Kongs or a biscuit ball. Put one of his meals inside a chew toy. This helps puppy to learn how to deal with frustration, and to problem solve. It also focuses puppy's chewing activities on those toys instead of unacceptable objects. When puppy is teething, pour some stock or soup into a Kong and freeze it. This helps cool the gums whilst he gets relief by chewing.

If you discover a chewed item even minutes after puppy has chewed it, you're too late! Dogs associate punishment with what they're doing at the time they're being punished. A puppy can't reason that, "I tore up those shoes an hour ago and that's why I'm being scolded now."  We think the puppy knows what he has done wrong because he runs and hides or because he "looks guilty." When you're angry and upset, the puppy feels threatened by your tone of voice, your body posture and your facial expression. Punishment after the act will not get rid of the undesirable Behaviour, it will only show puppy that when you are not there he can chew like a demon, but when you come home he must run away and hide. Punishment could provoke other undesirable behaviours like aggression, as well.

In most cases, destructive chewing by puppies is nothing more than normal puppy Behaviour. Give your puppy plenty of "people time." He can only learn the rules of your house when he's with you.