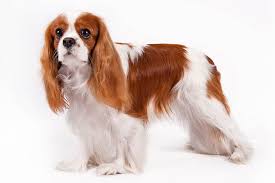 Today's Cavalier King Charles Spaniel if the direct descendant of the small sized Toy spaniels that were seen in so many of the pictures in the 16th, 17th and 18th centuries. They were given the name King Charles Spaniels as it was a great favourite of King Charles 11 and it is said that he was often seen with 2 or 3 following behind him.

This breed is known to be very friendly towards people and other dogs, and a pleasure to have in the family. The only negative thing that can be said about this breed is that due to bad breeding practices by commercial and puppy farmers in recent years, the reliability of the temperament of this great breed has been affected at times, with the result that some Cavaliers have been found to be aggressive, timid and/or shy. You should always get your pup for a Responsible and Caring breeder who will be able to supply you with a Cavalier with the correct type of temperament.

This breed, with good breeding behind it, is one of the friendliest of breeds and loves being around people. It could be termed a 'lap dog' and if the lap of its favourite person is not available, it will find another one that is!

Being a Toy breed, this dog does not require a huge amount of exercise, however a short daily walk where it can smell all the interesting scents around, will keep this little dog happy and balanced.

Even thought it is known to have a friendly nature, puppy school and on-going socialization will keep these important social skills in place.

Due to their love of people, a problem you may well face with this breed is possibly development of separation anxiety. However, this can be avoided by training the pup to enjoy being alone right from being a pup, and keeping Alone Time exercises in place.

The other potential problem with this breed is that it is prone to many inherited health problems. Due to this do ensure that you get your pup from a top breeder where both parents of the pup have certificates proving they were tested and cleared of hereditary eye diseases, hip dysplasia, luxating patella, then there is a much lesser chance of your pup developing these conditions. Medical Insurance is always a good idea when one has pets, and even more so when buying a Cavalier.

On average, and if well bred, the Cavalier,  does not tend to be aggressive to other dogs, however you must make sure that your dog has been well socialized so that it will accept another dog into the home.

​If bred correctly, they really are social butterflies. However as mentioned above, don't just rely on the dogs breeding, do your utmost to ensure that the social skills stay in place, by taking your pup to puppy school and keeping up the social skills.
Do they get on with other animals?

On average, and if introduced to other animals as a pup, this breed tends to get along with cats. However, they do have a strong prey drive, and love running around the garden chasing birds, butterflies or whatever it can find.

Extremely! Even though this is a Toy breed, it is much strudier than other Toy breeds and adores children. Do not just assume the breed will get on will with kids, start socializing them to as many different children as possible from being a pup - don't leave it up to chance.
Health

It seems like the number-one killer of Cavaliers is inherited heart disease (a rapidly progressive form of mitral valve disease). It is said that up to half of all Cavaliers will develop heart disease by 5 years of age, and virtually ALL Cavaliers by 10 years of age (if they live that long). No one should acquire a Cavalier King Charles Spaniel unless they have Medical Insurance.

An inherited neurological disorder (syringomyelia) affects at least HALF of all Cavaliers. Most individuals show symptoms between 6 months old and 3 years old. This devastating disease causes abnormal skin sensations, sensitivity to touch, pain, and/or weakness and difficulty walking. Some Cavaliers are only mildly affected and do well with daily medication, while others must be put to sleep. There is no cure for this cruel condition and it is present throughout the breed.


“In today’s age, with the rising cost of veterinary care, it really is a wise decision to consider medical insurance for your pets. Depending on the plan you choose, you can ensure that if your pet does develop one of the health issues the breed is prone too, that you will be covered –additionally, just knowing that any accident your pet may have will be covered, will out-weigh the monthly insurance fee for most pet owners. Our own personal choice is Genricpet as they have a ‘no limit’ policy and their rates are comparable to the rest of the industry. To find out the questions and things to look for in a Medical Insurance, please just follow this link”
Do’s and Dont’s