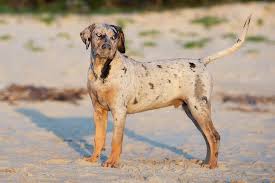 The breed originated from an area in North Central Louisiana near to Catahoula Lake, which is where the name came from and it is often known as the Catahoula Hound. It is believed that this dog is a descendent of the Native American Dogs in the above area. It started off being called the Catahoula Cur, however the name was chnged in 1979 when it became the official state dog for Louisiana.

What is especially interesting about this breed, is that although the AKC has designated the breed as a herder, it was also used to hunt wild board indigenous to its area of origin. They were used to track all manner of wildlife originally, such as hogs, black bears, mountain lions, and the smaller animals such as racoons, squirrels and rabbits.

It is believed that due to the above, when the Catahoula does herd (usually cattle or hogs), they tend to be antagonistic toward them, as opposed to other herders who tend to patrol the animals to keep them in place.

They are very bright and high energy dogs, and very often it is found that the females tend to be quieter and more relaxed dogs in general, as oppossed to the male of the breed.

They are known to be wary of strangers and very protective of their family. What is very striking about this breed is that they have distinctive eyes coloured  blue, green, brown, or amber. Some of them come with odd eyes—each one is a different color—or two-colored “cracked” eyes.
​Is this the right dog for you?

These are highly intelligent dogs that require a firm, but understanding owner. They do not do well with harsh training methods, positive reinforcement methods are far better. Because they are bred to be so independent, they can be challanging to train. These dogs are not recommended for a novice or first time dog owner, and especially when young can be very rambunctious and rowdy.
Due to the possibility of aggression to other dogs, especially of the same sex, they should always attend puppy school and then on going socialization to keep the social skills in place and this can be very time consuming.

They also tend to be reserved with strangers and are naturally protective of their families. Due to this, early and continued socialization with people is suggested.

They are not coach potatoes and will require approximately an hours exercise daily - these are true working dogs. This is not the dog to leave outside alone, all that will happen is that it will develop behaviour problems such as barking, pacing, destructive behaviour.

This is a working dog and is happiest when working, so consider trials, herding, lots of scent games for mental stimulation. 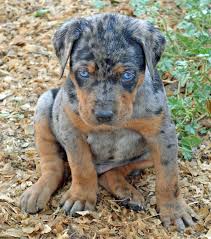 If properly socialized and raised with them, Catahoulas can do well with other dogs. However it is important to realize that this is based very much on the individual dogs temperament, its social skills and breeding and very often will not tolerate another dog.

​This breed tends to resource guard their good and toys, and wont always back down, which is another reason why they are often a lot better off in a one dog family.

When it comes to which sex get on better, your best bet is one male and one female (both sterilized). Never two males where this breed is concerned, it will challenge the other dog. . Never two females. The vast majority of the time two females will get on well until about 8 - 9 months of age and thenm fighting for position tends to occur. When males have the odd altercation, it tends to be over quickly, but with females, it just intensifies and often the only solution is for one of the females to be rehomes. This is not just for this breed, but in general.

​​As above, not always and that depends on temperament, breeding and the socialization the dog has been exposed too. One of the problems of this breed in relation to other dogs, is that it was bred to stand up to bigger animals while herding and hunting them, so if challanged, it will not back down.
Do they get on with other animals?

Catahoulas are protective of the children in their family, and as will all dogs, better to socialize them with as many children as possible, of all different ages and sizes when pups and keep it ongoing.
Health

Overall,they are a very healthy breed, however there is a very high rate of hip dysplasia (over 20%). Elbow dysplasia occurs, too, and shoulder dysplasia. Catahoulas can go blind from serious eye diseases, including cataracts, progressive retinal atrophy, coloboma, and persistent pupillary membranes.
Catahoulas can be born completely or partially deaf, especially the one's with a white coat.