Critical Periods:If we separated a human baby from all contact with other humans until it was five years old, then that child would never learn the ability to speak or to empathise and converse comfortably. In most cases, it would be fearful and introverted. 0 to 5 years old is a critical learning period for humans. The old saying “give me the child and I will show you the man” holds more truth than we have ever imagined. We learn more during this period that at any other time in our lives. In relative terms 0 to 16 weeks is the equivalent in canine age.

Forget the old wives tale that one year of a human equates to seven in a dog. A far more accurate measurement is fifteen for the first year, ten for the second and five for every year thereafter (though it depends on the breed and size) If you therefore calculate 16 weeks, it comes out as 5 years in human years. This coincides with Scott and Fullers 20-year observations on the critical periods of puppy’s psychological growth. 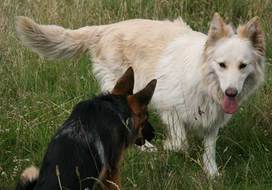 Socialisation:I cannot emphasise enough the need to socialise you puppy during this vitally important period. There is a vaccination now available where the full course can be administered by ten weeks rather than the normal twelve, therefore allowing two extra weeks of socialisation. The vaccine is by Intervet and is called Nobivac D.H.P.P.I/L.

Get your pups to socialisation classes, it is not enough to allow them just to mix with adult dogs they learn the all-important body language much quicker by being in the company of younger as well as older dogs. Nearly all the cases I deal with that involves interdog fear or aggression, relates to lack of early socialisation during the critical 0 to 16 weeks.

The good news is that unlike humans, dogs can learn to communicate after this vital period though they will never be fluent; they can learn to cope given time and lots of patience. 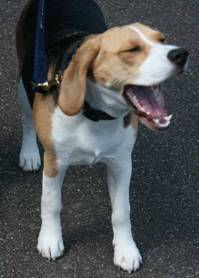 Stress:All animals including humans suffer stress at some time in their life, to some extent it is part of the survival instinct, it floods the body with adrenalin pumping the muscles up allowing us to decide whether to fight, freeze or flight.

Dogs have a powerful set of body postures that alleviate stress and diffuse potentially threatening situations, the shake, as if shedding water is one way of alleviating stress. We do not always see the signs such as dilated pupils, restless pacing, scratching, panting, loss of appetite, sudden dandruff and sweating. Most people think dogs sweat through their tongues by panting; this is a cooling system but has nothing to do with sweating. Dogs only sweat through their paws, damp footprints can be a sign of panic and fear.

Aggression:When we approach a dog that is either fearful or control complex aggressive aka dominant, we can often tell by body language if they are likely to attack. Look for balance, if the weight and balance is on the front foot and it is leaning forward at the shoulders and is making hard eye contact then it normally means business. If the balance however is on the back feet and the eyes are darting away and it is yawning or licking, then unless cornered or challenged it is unlikely to just attack out of the blue.

If we also put our weight on our back foot, we can often diffuse a potentially dangerous situation. Weight and balance are magnified in a dog’s mind, they are always looking for the subtle nuances in our body language, and this is especially true of a nervous dog. I was at a clients recently, when I leaned slightly back putting the weight on my back foot the dog approached, when I transferred the weight to my front the dog moved away.

Many people believe that if the hackles are up this is a sign of aggression. This is not always the case, a dog that is excited can raise its hackles, its actual intentions will be apparent depending on the approach, if it curves round coming in from the side and sniffs the ground as it approaches than its intentions are normally peaceful. If it comes in face on stiff legged and circling then it could be a prequel to aggression.
Appeasement Gestures:Lets look at meeting and greeting, as one dog approaches another you will see a wide range of reactions. Some dogs will lie down almost flat to the ground we often see this in Border Collies. Some will lie and slightly roll over averting there eyes this is a submissive but friendly gesture The ones that lay down but in a Sphinx position head erect and body and tail upright are signalling to the other dog that they are confident and high ranking but are friendly and its ok to approach.

Others will yawn, circle slowly but not stiff legged, sniff the ground and allow eyes to constantly dart these look then look away again this is also a non-threatening approach. Others will stand off and await the other dog to approach so they can observe the approaching dogs intentions before deciding whether to greet. Just standing still can appease nervous dogs, lifting a paw up and down is another gesture I often see this signal to both dogs and humans, blinking eyes is a also diffuser of aggression that we can also use. Couple this with yawning averting our head and licking our lips and you can often calm a nervous or aggressive dog.

Clients often tell me that their aggressive dog dislikes black or dark dogs, and they cannot understand why? It is simple really; they cannot read the intent on a very black background therefore they are unable to react to the calming signals. I am occasionally told that some dogs are racist to coloured people; Dogs cannot be racist unlike humans they have no moral or racial preconceptions, this form of aggression is simply because they cannot distinguish features and intent on a darker background and may become fearful or aggressive because of that.

Rank:I am not of the school of thought that thinks there are no such things as dominant dogs. It appears that it now politically incorrect to use this word to describe a dog’s position or state of mind. If we agree the fact that dogs have submissive tendencies then the antonym (exact opposite) of submission is dominance. If we accept that like many other creatures’ dogs do have levels of status, then status brings in rank and therefore control and dominance. I am well aware that the word dominance is vastly overused and in many cases is blamed for almost all canine problems, but to suggest that there are no dominant tendencies in some dogs psyche is to my mind mistaken and an exercise in semantics.

Having said that I am constantly told that this or that dog is displaying dominant aggression. In fact quite the opposite is mainly the case. The confident and high-ranking dog has no need for aggression. Its body language and controlled air shows all who can read the signs that this is not a dog to mess with. The wolf pack rarely has a need for actual aggression it is mainly stylised posturing that allows the hierarchy to exist peacefully. Generally, fear and lack of controlled early socialisation, causes most aggression based behavioural problems, that and our inability to read the clear signals that our pets are constantly beaming to us.

In conclusion, we need to watch and learn dog speak, write down the signals your pet gives and in what context it was used. With practice and given time, you should find yourself able to communicate and signal back, this will benefit both you and your dog and will result in a stronger bond and understanding of each other’s needs resulting in a relaxed and pleasant relationship.