From the Veterinary Practice News. USA.
​ 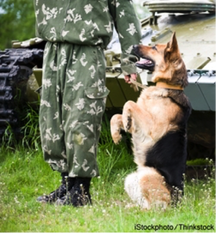 Post traumatic stress disorder, or PTSD, is not a fully recognized veterinary behavioral phenomenon but some believe it exists and is probably more common than we think.

I have taught veterinary students about PTSD for many years, my initiation into this ongoing phobia being a particular case I saw many years ago. The dog in question was shot by a Boston police officer who thought the dog was going to attack him while he was pursuing a suspect.

In fact, the dog was only charging along behind him, energized by the excitement and commotion.
The .38-caliber bullet entered through the dog’s head, just missing vital structures and traveled along the dog’s neck, finally coming to rest in the chest wall. The dog sank to the ground in a pool of blood and his distraught owner was quickly on the scene trying to revive him.

As it turns out, the dog was not dead but close to it and heading down a path of no return, but his owner quickly scooped him up and brought him to nearby Angell Memorial Animal Hospital where the ICU staff worked wonders, plugged the leak (so to speak) and brought the dog back to viable condition with fluid therapy.

The dog’s recovery was slow, but recover he did—but behaviorally he was never the same.

PTSD is a well-recognized condition in many military personnel, firemen and policemen who have undergone traumatic experiences. According to the National Institute of Mental Health, the condition has been defined as “an anxiety disorder that can develop after exposure to a terrifying event or ordeal in which grave physical harm occurred or was threatened. Traumatic events that may trigger PTSD include violent personal assaults, natural or human-caused disasters, accidents, or military combat.”
Recently, it has been found that dogs as well as people can suffer from PTSD. In fact, it’s estimated that about 5% of military dogs develop the disorder. It’s easy to understand why bomb detection dogs, or search and rescue dogs used to find bodies after disasters, might be subject to PTSD. However, what many people don’t realize is that civilian dogs can also fall victim to it. If a dog goes through a natural disaster like Hurricane Katrina, or is abused, neglected, abandoned, or loses his human caretaker, he could develop PTSD. Many rescue dogs fall into this category.

Treatment for any dog suffering from PTSD includes retraining, which revolves around convincing him that the world is not a bad place.

• Provide the dog with a safe place of his own, whether it’s a room or a crate. This safe place needs to be quiet and away from everything. It needs to contain the dog’s favorite, familiar toys, food bowl and a piece of your clothing, so he realizes he is not truly alone. Chew toys are also a good idea.

• Routine is important for these dogs. They need to realize the world is an ordered place. If you have a dog that suffers from PTSD, he needs to be fed and walked at the same times every day. Introduce new things very gradually so he has a chance to become used to them. This process requires a lot of love and patience.

• Exercise and play are other important facets of therapy. If dogs with PTSD are given the opportunity to run and chase other dogs, play with their people, retrieve, swim, or run an agility course, they recover much more quickly. If the dog can relearn how to have fun, treatment is much more successful.

• Along with retraining, many holistic approaches and treatments can help. Star t with a high quality diet containing all the vitamins and minerals canines require. A holistic or integrative veterinarian can help you develop the right diet for your own dog. The diet should be supplemented with Omega 3 fatty acids, as these nutrients naturally boost the “feel good” hormones that fight depression.

• Herbs and nutraceuticals can also help dogs with PTSD. L-theanine and melatonin can be especially useful. Both are readily available and safe for most dogs. Specific canine forms of L-theanine can be purchased. Chinese herbs have also been used for anxiety and aggressive disorders in canines. Combining herbs and acupuncture is an effective treatment for anxiety and PTSD.

• Dog pheromone collars or infusers have proven effective for anxiety problems, while flower essences such as Bach’s Rescue Remedy can be used along with training and other modalities.

• In conventional medicine, retraining is often combined with drug therapy. Many of the drugs used to treat separation anxiety are also used for PTSD. Clomipramine, fluoxetine and amitriptyline are the most commonly used pharmaceuticals for this condition.

Cure or management?
​
Can a dog with PTSD be cured using any or all of these methods? In some cases, dogs seem to return to normal, but in others, the problem need to be managed throughout the animal’s life. According to Dr. Nicholas H. Dodman, director of the animal behavior clinic at the Cummings School of Veterinary Medicine at Tufts University, PTSD can go on for years and is never truly cured. “It is more about management,” he says. “Dogs never forget.”