Can Dog Litters Have More Than One Father? You May Be Surprised…

www.iheartdogs.com - an interesting website with lots of  diverse topics - enjoy!
​ 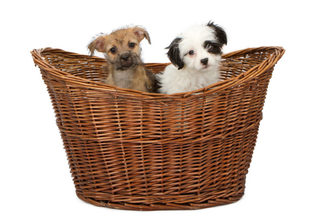 Promise were litter mates!
People have heard this mentioned in common conversation so much that many take it as a “wives’ tale.” However, it is indeed true:

A female dog can have a litter of puppies with more than one father.
So, your next question may be, how does this happen? Well, it’s science.

Dr. Kathryn Primm, DVM, owner of Applebrook Animal Hospital and the “Animal Stuff You Wonder About” blog, explains: “Because as litter bearers, they ovulate more than one egg and they lack morality about who they mate with, each egg could technically be fertilized by a different father.”

Just how many fathers you may ask?

“No limits,” Dr. Primm responds. “If there are 8 eggs and she mates with 8 males, each could have a different baby daddy.”
And, in case you were wondering, one puppy cannot have two fathers. One mother, one father per puppy.

Why is this important?Because if you have a purebred dog that you breed to another purebred dog and then think, there, it’s done and let your female out, she could meet the “Tramp” down the street and end up with a litter of puppies – some purebred and some not.

Looks Don’t Make The FatherWe’ve all seen a litter of yellow Lab puppies and wondered how the breeder tells them apart other than male and female. The pups all look identical and it’s no question that they are from one father.

This is because dogs of the same breed have similar genes (homozygosity) and are going to produce similar looking dogs. (www.psychologytoday.com)

But then you see litters were all the puppies look different – different colors, coat types, sizes even! And you think, man this girl got around!
However, that is not necessarily true either! If you breed that same purebred Lab to a Poodle, everything changes. This is due to “heterozygosity” – meaning a mixture of genetic material. In this case, the genes are not going to “mix” the same in each puppy. So, you may get a puppy that looks like a purebred lab, one that looks pure Poodle, one that looks like curly Lab, or a stouter-built Poodle.

Some may have the Lab coat and some the Poodle. And colors could be a wide range. But, there was only one father of the bunch.

So…Whose The Daddy?You may be wondering, then, how they know who the dad is? If the female got out of the house, there is no way to know who the father is – it could be any of the intact males in the area (and any number of them!).

However, using DNA tests, they can tell some things. According to Dr. Primm, DNA is the only way to prove which puppies are full siblings. So, you won’t know what the fathers were, but you can figure out how many there were.

​If you own the father(s), of course, you can perform paternal testing to tell which puppy belongs to which father – and then unveil it on your very own canine Jerry Springer show!

If your female and original mate were both purebreds you planned on registering with the American Kennel Club (AKC), they require a DNA test to prove the parents of the puppies. Interestingly, some breeders do this on purpose, having multiple fathers in one litter. All the puppies can be registered, as long as the correct father can be identified via DNA for each puppy.