Some articles regarding compulsive behaviour in Bull Terriers

* Pyoderma "White Bull Terrier Disease”
Friendly, clumsy, courageous, with a true love for people and companionship, Bull terriers love nothing more than being part of a family and getting involved in all family activities. They do not do well left alone day after day and will become destructive if left to their own devices. It would be like leaving a creative child alone in a room full of explosives!
So sunscreen is particularly important for this breed, especially the white dogs.  They do not live well in cold, damp conditions, so if you live in a cold area, a jersey can be worn by your bullie. Bull terriers are also not very big on barking.

Is This The Correct Breed for You?

If you love being active, work flexible hours and are fit and healthy, then yes, the bull terrier will make a wonderful companion for you! They fit in well with out-going families, preferably with slightly older children, though younger children can be a match if always supervised by an adult.

Bull terriers need a medium, suburban sized garden, though they will live in a smaller garden, with regular walks and trips outside the premises and should be allowed to live indoors with their families.

A bull terrier is NOT for you if you work long hours during the week, or work away from home often. They do not fair well with Workaholics. They can become bored very easily, so if you are a couch potato of note and would rather be in front of the TV, then no, rather get yourself a cat. If you also are house proud and cannot tolerate shedding or hair woven into those expensive suede couches then a bull terrier is also not for you. Believe it or not, but that short coat  sheds a lot!
Are Bull Terriers Compatible With Other Dogs and Animals?

Yes and no. As long as your bullie is socialized with other dogs and animals, then they will happily live with them. Even cats, though they do love a good chase after a cat, so even if they are socialized with them, always just keep an eye out if the cat starts to run. ​
​It is best to avoid getting two dogs that have such high prey drives to kill, like the other “fighting breeds,” pit bulls, Staffordshire bull terriers and chows. Especially if they are both males.

With LOTS of socialization it can work, but will require supervision as they both hit sexual maturity.  Male and a female will get on with each other generally, but if you want a calmer environment with no potential outbursts of rage, having a bull terrier with another “fighting breed” is best avoided.
Training and Grooming Requirements
Punishment and provoking a bull terrier will just encourage  a nasty, reactive streak which we want to avoid.
Clicker training gets a good response out of the bullie, using a yummy food reward of viennas, cubes of cheese or chicken. They are easily distracted by movement, so train your bull terrier away from other pets or running children.

The bull terrier is quite rambunctious and must be taught not to jump up or nip and grab when playing. Many new items of clothing have been ruined by a nipping bull terrier!
They can become dirty and smelly quite quickly, so a regular bath of at least every 6 weeks is advised, with a hypoallergenic shampoo. They have sensitive skins and cannot handle harsh shampoos.
Heart disease and heart mummers are a concern. This is a typical bull terrier disease and recommended tests should be done to rule out these problems.

Kidney disease (nephritis) is another concern for the breed.

Sometimes a Bull terriers can suffer from OCD (Obsessive compulsive Disorder) or CCD in the dog world (Canine Compulsive Disorder) This can result in a common practice of “Tail chasing,” also known as “spinning.”  A bull terrier can become so consumed in biting and nipping at its own tail, that it results in not only a bad compulsion, but also can cause lesions or open wounds on the tail. The bullie can do some bad damage to its own tail and sometimes as a result of how serious it can be, the tail may need to be amputated. This aimless behavior is believed to be linked to a neurological factor, brought on by anxiety or stress. But it is also believed to be a genetic disposition.

Another known behaviour problem seen in many (I think this is actually quite rare in bullies) bull terriers is “SOA- Sudden onset aggression” or “Rage syndrome” seen in spaniels. It is thought to be a partial seizure disorder. It is will be displayed as “waking SOA,” where otherwise normal dogs will display a sudden burst of uncontrollable rage upon awakening. The behavior is not really in the dogs conscious control, so behavior modification and training may not control it.

​Some Wierd and Wonderful Bull Terrier Traits
​
Bull terriers have some very quirky traits that make them,well, a little unique in the dog world.

Trancing- Known as the “Bull terrier Ghost walk,” is a unique, common trait that has only been seen in bull terriers. Also believed to be somewhat neurological – “Trancing” is when the bull terrier seems to go into a “trance like state” when they walk under table cloths, hanging plants, curtains or bushes in the garden in EXTREME slo-mo, almost like a robot. It seems as if the hanging objects “tickled” the back and head of the Bull terrier, who seems to enjoy it so much, that their eyes gloss over and no amount of calling its name will bring him “back to earth.” There is no major concern for this particular activity and your bullie will come out of it, eventually.

Hucklebutting- another weird bull terrier past time, is when your bull terrier may all of a sudden become VERY excited and will run around at warp speed, dodging objects and slamming into walls, zooming around the house and garden. Best to sit back and enjoy the show because if you get in the way-injury is likely!
​Some Do's and Some Dont's

Do make sure you get your pup from a KUSA registered breeder and if possible go and meet the breeder before purchasing and go and meet your pup and its parents before taking it home. (Sometimes it is not possible to see the father as he can be on another premises, or even in another country)

Do sterilize at 6 months of age or on your vet's advice. Don't get left with unwanted pups - breeding is a science and and art and should be left to the professionals.
Do make your pup part of your family, this breed loves company.

Do make sure they get walks a few times a week and mental stimulation such as legal chew toys, games etc. www.friendsofthedog.co.za/destressing-physical-mental.html

Do download the free e-books on BEFORE & AFTER Getting a Puppy by Dr Ian Dunbar - they contain a wealth of information and will get you off to a good start
​Don't let you Bull Terrier lie and sun bathe without putting on sun screen. This breed is very prone to sun burn, especially the white skinned breeds.

Don't get a Bull Terrier if you work long hours or are away from home a lot.


Some Pictures below of the Breeders Bennie and Tania van Niekerk, with their much loved dogs - this is the stock that your pup would come from. 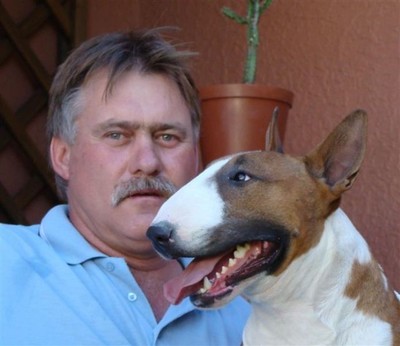 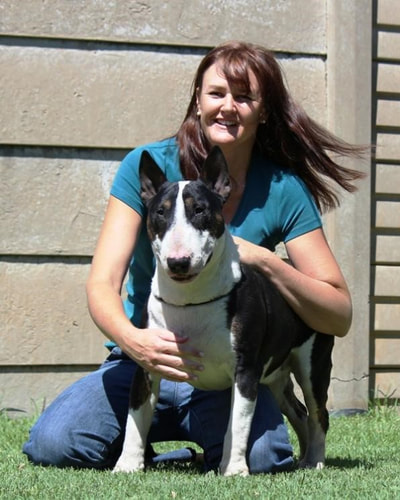 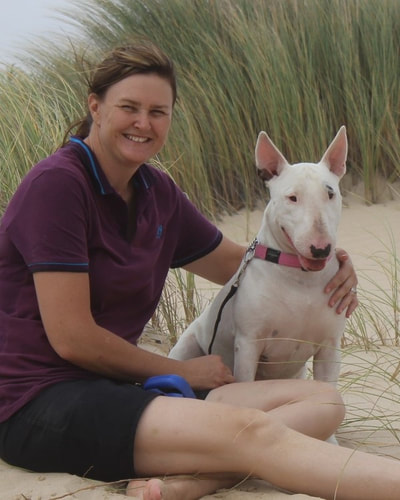 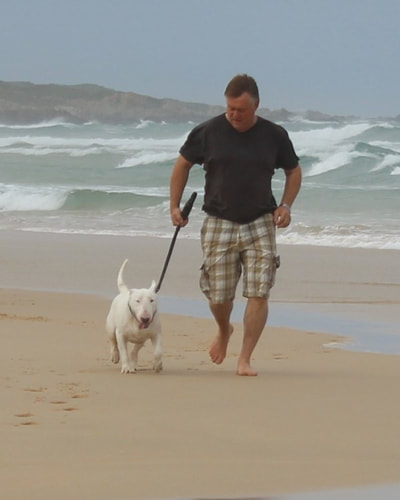