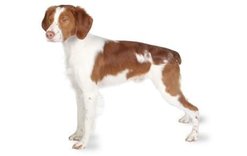 The Brittany was developed in the Brittany province of France between the 17th and 19th centuries, becoming recognized in the 20th. If you have ever seen old tapestries featuring hunting scenes, the odds are that the orange/brown and white dog featured in it is a Brittany!

This dog was bred as gun dogs for bird hunting and is often referred to as a Spaniel. The Spaniel was dropped the word Spaniel from this pointing dogs breed in 1982.

This is a very versatile family companion as well as being a companion to a hunter. These lovely dogs have very high energy levels and show unbounded enthusiasm for everything the do.

This is a very bright dog and being left alone at home is not an option. He needs to be both physically and mentally stimulated, otherwise his exuberance will just go totally over the top and result in behaviours you may not be happy with!

Being about 17 - 20 inches in height, this bred is ideal to take with you in the car.
​Is this the right dog for you?

When we say this breed has high energy levels we are very serious! You are looking at an average of an hours walks per day, not just a quick jaunt around the block. If your Brittany does not get the exercise and mental stimulation it requires, it may result to barking(for which they are know for) and even chewing and being destructive.

Due to the high energy, this breed needs a large garden and interactions with family such as ball games, flirt pole etc.

The breed can also be very sensitive, so training should be based on positive reinforcement methods and they do not do well with shouting and stress.

On average the Brittany does not tend to be aggressive to other dogs, however you must make sure that your dog has been well socialized so that it will accept another dog into the home.

​When well socialized, the Brittany is polite and gentle with everyone and peaceful with other dogs. But there is timidity and excessive submissiveness in some lines, so early socialization is a must to promote a confident temperament. ​

Being a hunting dog, they should not be around small animals, such as rabbits, rodents and birds at all, especially in the home environment. However, if introduced as a puppy to cats, they can learn to live in harmony.
​Are they good with children?

​Because of their happy, friendly nature, Brittanys they get on well, however care must be taken as their exuberance could result in a small child being knocked over.  As always, just because this is a friendly breed overall, dont take this for granted - early socialization at puppy school is always recommended, as is continued socialization. Make sure that the pup meets children of all ages before the 16 week period.
Health

One of the most common health problems associated with this breed is its teeth, so do ensure that teeth are cleaned daily and that the dog has its teeth checked at the vet at least once. per year.

Other common genetic problems that they are prone to is PRA (Progessive retinal atrophy, HD (Hip Dysplasia), Epilepsy, luxating patella and also glaucoma. Allergies are not unusual.