I’ve been wanting to write about Body Wraps for quite awhile so maybe I should do it now while the dogs seem to be rat hunting in the garden! Many of you already know and love what they can do, some of you have heard about them and a few of you have seen dogs around town wearing them! They are actually elastic bandages that we wrap around the animals body in a variety of ways for a variety of reasons. One of the main reasons is to reduce anxiety. And remember that there are many things in a dogs life, for instance that can cause anxiety:


I could probably go on for pages with all of the things that might stress your pet. I’ve but mentioned a few. It might be interesting if you would add more to the list for me of things that concern your individual animal. So send them to eugenie@ttouch.co.za and let’s see what we come up with.  The reason I mention these few are that I often have people say, “What would my dog get stressed about? He has a good home, love, enough food, toys to play with, etc. etc. However, we often don’t realize that they do indeed get anxious and often a Body wrap can be a great tool in helping them cope with these situations.

HOW DOES IT WORK? I’m not sure if there is a definitive answer to that question, but think of a swaddling blanket on a baby. Women have known for years that a fractious baby can often be calmed by being wrapped in a blanket. I often think of the African women in this country who carry babies and children on their backs. I don’t know if I’ve ever seen one crying! I’m sure it happens, but not often. The body wrap seems to give a sense of security or being held. I’ll never forget the time I came home from my first TTouch Training. I had been working with a dog trainer on being able to walk Danilo, my cross breed (bull?, pit?) terrier around the neighbourhood without him going for every dog behind every gate! We had had some success, but it was random and never consistent. The next session we did I put Danilo in a Body Wrap and although he perked up at every gate where he knew there was a dog, he didn’t once go for one! He still looked, but seemed to be quite happy to go by without altercation. I was gob smacked! It actually took me awhile for the light bulb to go on: He had on a Wrap! Was it really possible for it to make such a difference? Indeed it was and is! After that I used body wrap on him and after a time I didn’t even need that. I could see when he’d start to stiffen those back legs and I simply did a few leg circles to remind his body how to relax and off we’d go past the dog or gate.

Another story involves my Golden, Angelique. She used to get carsick and would throw up 3 times in the 20 minutes that it took us to drive to training. It wasn’t actually motion sickness, but an anxiety caused by too much excitement. I had tried homeopathic remedies to no effect. The first time I put a body wrap on her, she made it all the way without getting sick once! Admittedly I did Ear work as well, but I think the Body Wrap really made a huge difference.  Today, she can ride for long distances without the wrap and without getting sick.

Lest you think this bandage is some sort of miracle I will again say that I have worked on her confidence since she was a puppy, but many of you met her at WODAC last year and I think you’ll agree she handled herself amazingly well for a previously shy, nervous dog. Having said that, we often see some immediate changes with the body wrap on as in the cases above. Another perfect use for it is for dogs that are fearful of thunderstorms and fireworks. I have clients who keep the body wrap handy in thunder season. Although if you use it regularly, you might find that come that storm, the dog handles it without a wrap!

WRAPS ARE USFUL FOR:


And this is true for most animals. We use Body Wraps mostly on dogs and horses, but also occasionally on cats & other animals as well as on humans. There is a wonderful book written by Temple Granden who is autistic and discovered that ranchers were using a cattle press to keep the anxiety level down in cattle during injections, etc. The reason being that if they were anxious at procedures, the adrenalin levels went up that toughened the meat. She decided to make herself a home made press where, when she felt her anxiety level rising, she could sit down and pull a lever to feel something firm against her body. She found that when she did this her anxiety quickly lessened.


HOW TO DO THE BODY WRAP!
We had a great response last month from the body wrap article so now of course I’m under pressure to describe “how to” do it! I think the first thing you need to know is there isn’t a right or wrong way. We have many different configurations of wrapping dogs and I will endeavour to give you a few. I feel I also again have to caution you that although the wrap is a wonderful tool to use in many situations, I strongly urge you to remember that it is but one aspect of the TTouch work which includes the Touches as well as Groundwork and that the use of all three is recommended for success!

T-Shirt Wrap
This is a way of giving your dog some sense of its body without needing an elastic bandage and it sometimes easier for certain dogs.  Use an appropriate size T-shirt, such as a child’s T-shirt for small dogs, an adult medium or large for mid-size dogs, and extra large for large dogs.
Place the T-shirt over the dog’s head backward, with the front of the shirt facing up.  Put the dog’s front paws through the armholes.  Take the loose material near the hem and gather it into a knot or secure with a scrunchie at the waist on top of the back.
Variation:  Cut an X in a plastic can lid, thread the hem through, and pull it comfortably tight.  The lid will hold the fabric in place.

Elastic Bandage Wraps
The bandages are elastic, very stretchy and beige in colour.  They come in 2-, 3-, 4- and 6-inch widths. We get ours from the Medical reps and have them available in the TTouch office.  Bandages are held in place with diaper safety pins.  When fastening wraps on the back, do not pin directly on the spine.
Remember: Safety pins can come open, so please be safe and use a Baby pin!
Use a 2-inch bandage for small dogs, a 3- or 4-inch bandage for large dogs, and a 4-inch bandage for giant breeds.  Small dogs need only one, large dogs need two, and giant breeds may need three.  You might need to trim a bit for the best fit for your animal. We also find that there are a few Horse exercise bandages that although are a bit heavy, can be used for a very large breed. These are available at your local Tack Shop

Half-Body Wrap
Place the centre of the wrap at the centre of the dog’s upper chest.  Bring the ends up on either side to cross over the shoulders, then down behind the front legs, crossing under the belly, and up to the centre of the back.  Fasten the ends with a Baby pin.
Variation: As the dog adjusts, pull the pinned portion back to the lower spine.  Later pull it back around the hips at the top of the tail.  These adjustments provide some of the benefits of a Full-Body Wrap and help the dog accept that configuration.
Variation: Place the Half-Body Wrap over a T-Shirt.
Usefulness: For dogs who are shy, concerned about their Hindquarters, or wild and you just want to get something on them!

We generally refer to a full body wrap as connecting the front chest of the body to the rear end or buttock area. There are many ways to do this. Below are some ideas. If you want to try your own configuration I usually advise that in the beginning, one of the ideas is to help put the dog into balance, so keeping it more or less symmetrical is a good idea.
#1 Full Wrap in Two Stages: Leaving the Half-Body Wrap in place, fold a second bandage in half to find its centre.  Slip one end under the pinned part of the Half-Body Wrap and pull it through until its centre is under the pin. Fold it over so it is two layers thick and moving from the waist straight back toward the tail.  Remove the pin and use it to secure all four layers at this intersection, or use a second pin to do this, avoiding the top of the spine.
Separate the two ends and pull them under the abdomen on either side in front of the hind legs (without crossing), back between the legs, then up on either side of the tail.  Secure the ends onto the bandage on the lower back with another Baby pin.

#4 Racing Stripes or Debby Wrap: (named for one of the Instructors) Use a single length of elastic or two bandages pinned together.  Holding one short end, tie a loose overhand knot around the dog’s neck Or pin the pieces together.  Pull the rest of the bandage straight down the spine to the base of the tail.  At the right side of the tail, bring the bandage down inside the right rear leg and toward the front of the leg, then up and across the small of the back to the left side.  This creates a flank-to-flank cross-piece.
Thread the wrap through the inner thigh of the left hind leg, front to back, and up the rear on the left side of the tail.  Tuck the wrap under the flank-to-flank cross-piece and bring it up to the neck[ if you have enough wrap] and pin where the wrap connect just behind the neck already. Pin at this point.
Note:  If your wrap it too short, fasten pin where the “cross-piece” goes over the lower back 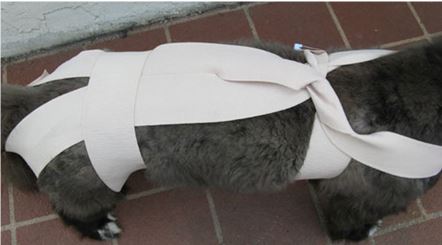 Figure 7: View from the top
GENERAL: The configuration of your wrap often depends on the shape of your dog. For instance a Double diamond wrap might be hard to keep on a sloped back of a German Shepard.  If one doesn’t work, then try another! Or make up your own. Be creative!

The latest update is the creation of the Thunder Shirt, which comes from the USA. This is a more “sophisticated” version of the body wrap and can also be bought at the TTouch office or at www.ttouch.co.za