This article was first published in The APDT Chronicle of the Dog, copyright 2010 The Association of Pet Dog Trainers www.apdt.com​
​

Jenn Merritt, CPDT-KA, is a Tellington TTouch Companion Animal Practitioner and owner of Blue Dog Creature Coaching in Efland, NC. She presented “Tellington TTouch in the Canine Classroom” and “Training Canine Companions for Lifelong Partnership with Autistic Children” at the 2009 APDT Conference in Oakland, CA.

​Jenn is certified by the Certification Council for Pet Dog Trainers, a professional member of the Canadian Association of Professional Pet Dog Trainers, a Guild certified Tellington Touch Companion Animal Practitioner, a Family Paws Parent Educator, a Licensed Presenter of the Dogs & Storks™ educational program. and is Vice President of the Burlington Humane Society board of directors in Burlington, Ontario.
In her spare time, Jenn contributes to dog training journals, magazines, and blogs including the Association of Pet Dog Trainer Chronicle of the Dog, DogFancy, Dog Star Daily and The Good Dog Blog.

In 2011, Jenn was nominated for the prestigious Maxwell Medallion for excellence by the Dog Writer’s Association of America for her series on the TTouch Method. Jenn also has produced a DVD on dog park safety/play behaviors and a set of DVDs for TTouch, documenting the 30th anniversary “Cellebration” with Linda Tellington-Jones. 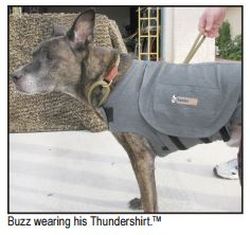 About 10 years ago, TTouch was recommended as a way to help my dog recover and adapt after an amputation. The simple techniques not only excellerated my dog’s rehabilitation, but also contributed to positive behavioral effects as well. This experience prompted me to learn more about the TTouch Method and attend a series of hands-on workshops. After introducing the techniques within dog training classes and with private clients, I discovered how seamlessly the TTouch Method could be integrated with reward based training. It could enhance progress on a variety of issues. Over the years, TTouch became a vital option in my training toolbox.

When most people think about TTouch, they know it involves various touches. But the TTouch Method is more than just physical touch-it is a way to provide an animal’s body and brain information that can influence how they move, react, and learn. TTouch can be particularly useful when dealing with dogs that are stressed, tense, anxious, fearful, or over-aroused and otherwise unresponsive to food rewards. By helping the animal achieve a calmer state, reactivity and overall stress can be decreased and we can then concentrate on teaching the dog more adaptive ways to respond to their environment. Most importantly, TTouch is easy to learn and use, easy to teach to clients, and can be used in a variety of different situations. The worst thing that can happen by using a TTouch technique is nothing.
​
The three main elements of the TTouch method are: body wraps, various physical touches, and balanced move- ment exercises. This article will focus on the use of body wraps and the physical and behavioral changes that can occur with their use.

Body wrapping involves not restrictive lengths of fabric, such as an Ace bandage, draped in a figure eight over and around the chest, shoulders, abdomen, and sometimes the hindquarters. The wraps should provide just enough pres- sure to provide contact, are never tight, and are ideally used for short periods of time to prevent habituation, sometimes only 10-15 minutes. Body wraps such as ThundershirtsTM are very easy for clients to put on their dogs and provide a custom fit. ThundershirtsTM are also ideal for working with dogs in classes and public spaces as they look like any other fitted jacket.

My first experience with body wraps was with one of my own dogs that suffered from catatonic thunderstorm anxiety. Nothing seemed to provide any sense of relief including prescription medications. Use of a body wrap caused a profound change in my dog from an utter state of panic to a calm, relaxed state. Before the storm arrived, I applied a “half” wrap and she curled up and remained in a calm state during the particularly noisy storm. From that point on, when a storm approached, she would find me in the house to put on her wrap, and she could easily cope. If I didn’t put the wrap on, her reactions were still less intense than they had previously been suggesting a cumulative effect on the body and mind.

Can light pressure from a body wrap really affect internal states and behavior? The most obvious example may be how pressure calms a fussy infant when they are swaddled. To explain how pressure touch creates shifts in behavior, we can look to how the nervous system takes in and processes this specific information. Through a body wrap, we are subtly enhancing the amount of information received by the nervous system from different parts of the body contacting the wrap. The nervous system responds by sending information back to the those areas of the body influencing movement and releasing body tension. We can see not only physical responses to pressure touch such as relaxed muscles and posture changes, but also physiological responses, such as reduced respiration (1).

Physical and physiological changes from the applica- tion of pressure have been demonstrated with people as well as dogs and other animals. Author Temple Grandin discovered first hand how pressure could affect people as she learned to manage her own symptoms of Asperger’s Syndrome. As a young adult, she developed a “squeeze machine” that applied pressure to her body and found it relieved her anxiety, tension, and aggression. The idea came from her observations of cattle and other livestock animals being calmed while contained in a squeeze chute (2)
Pressure vests, used by occupational therapists to aid children with a variety of different sensory and processing disorders, can improve concentration and performance in the classroom.(3). With dogs, pressure on the body has been studied as part of treatment protocols for dogs with severe fear based aggression towards people and other dogs. It has been shown to aid in the suppression of aggressive behavior and arousal.(4)

After experiencing such surprising successes with body wraps in my own home, I began to use them with my clients for anxieties beyond thunderstorms. Wraps could be a tool to help reduce travel anxiety, noise anxiety (such as construction noise), and generalized anxiety. Eventually, wraps also made their way into my dog training classes.

From puppy classes to performance-based classes, I, like many other TTouch Practitioners, found body wraps could serve a variety of functions within the classroom. Initially, wraps seemed like a perfect tool for inexperienced puppies and dogs that came into basic training classes that were nervous or aroused. Body wraps were an easy way to get them settled in. I would often play a “dress up” game with Thundershirts(TM)  introducing them within the context of a lighthearted activity. More often than not, the shirts seemed to give a sense of comfort, a sense of containment, and shifted the dog’s focus from their environment to their bodies. Dogs that previously were too aroused or fearful to be interested in food rewards suddenly began to eat. If they began taking treats, I knew that stress was being reduced and the dogs were entering into a better learning state.

Case Study 1: Abby
Abby was a six-year-old female Goldendoodle with per- formance anxiety. She and her person, Judy, loved to prac- tice Rally-O with flair and confidence at their practice space, but when it came to performing routines at a run-thru or  trial, Abby would become tense, she would freeze up, and become unresponsive after only few seconds in the ring. I was convinced that a body wrap would help Abby feel more secure and keep her body from tensing up. We used a Thundershirt (TM) on Abby, which she could take into the ring at a run-thru, introducing it at her regular practice space. I also had Judy put the Thundershirt (TM) on Abby for brief periods outside of practicing, when they were throwing a ball or just having fun. The next week, we tried using the Thundershirt (TM) in the ring at a Rally-O run-thru. On her first run, Abby entered the ring with surprising confidence and completed her run with no freezing, a relaxed body, and all the flair that she demonstrated in practice. The run was a true breakthrough for dog and handler.

As wraps can also impact movement and posture, they can be a tool to improve performance in dog sports and related activities. The light pressure brings awareness to certain areas of the body and help the dog to pay attention to their bodies instead of their environment. Many dogs have a lack of awareness of their bodies, particularly when they are aroused. We see this in performance dogs knocking over bars or missing contacts, also increasing their risk of injury. Body wraps can also be used to help dogs become more tuned into their bodies and thereby more successful and safer while practicing and performing. ​
After several runs, the average was 25% bars knocked down, with a few runs with no bars knocked down. This one session was a definite im- provement and incentive for Kylie’s handlers to continue working with her towards competition.

In conclusion, the longer I instruct dog training classes, the more uses I find for body wraps. They have certainly helped me to maintain a calm and successful learning environment. Wraps have been an essential tool in helping many of my clients and their dogs, who for one reason or another may not have been able to succeed in a classroom environment. This includes many dogs that had been dismissed from other trainer’s classes because they were disruptive and unable to concentrate. The wraps, along with the other tools of TTouch, provided the support they needed to excel.

In future columns, we’ll explore the two other facets of the Tellington TTouch Method, specific touches on the body and balanced movement exercises and how they can also be incorporated into reward based training. To learn more about TTouch, visit www.ttouch.com for information about hands on workshops, books and videos

(To find out about Workshops or a Practitioner in your area, contact TTouch in SA at either
info@ttouch.co.za or www.ttouch.co.za)
Endnotes