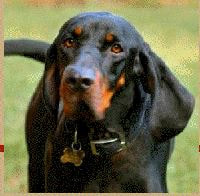 Pic - Black and Tan Coonhound Rescue. If you are looking for one of this breed, do contact the Breed Rescue first and foremost. They have a wealth of knowledge on the breed, help to pair the right dog with the right home, and will help to point you in right direction. Link below and if not near you, do look for one that is. https://www.coonhoundrescue.com/
General

Although this dog is called a Coonhound and used primarily for hunting coons, it will happily hunt, racoons and poossums as well as bear, deer and mountain lions. It runs it quarry entirely by scent. and has been known to bay and howl until the hunter arrives.

They have very dark eyes, beautiful velvety ears, droopy jowels, tend to drool, especially after drinking, and a lovely disposition.

This breed is very popular with the police, especially in search and rescue situations and drug location, as it has such a sensitive nose and picks up scents, and will follow them, very easily.

The Duke, a 1999 feature, stars a Black and Tan Coonhound in the leading role. One of the famous owners of this breed was George Washington, who was an avid hunter. Another well known name is that of Thomas Jefferson, who was known for this quote "How one deals with their Coonhound's slobber, is the most telling way of how one deals with everyday problems; after all he is your best friend"
​Is this the right dog for you?

This breed is known to be very mellow, calm and takes easily to living indoors with its family. However when outdoors, its incredible sense of smell and hunting instinct takes over, and it will try and track each and ever scent it comes across!

As they dogs were bred to be independent and make decisions themselves, they can be rather stubborn and like to do things their own way.

These dogs are not difficult to train and as they are very food driven, will do just about anything for a treat. The biggest problem with training is that if the dog picks up on a scent, everything else will be forgotten which can make it rather a challange to train, and you will need patience.

Due to the instinct to follow scent, one of the exercises that should be taught is the Real Reliable Recall and the Recall using the Long Line - however, with a dog like this, if fully focused on the scent, even the training may not work!

This breed can run for absolutely kilometers, however, it is usually happy with a long walk daily or even running next to you while jogging. It is a hound, so very important to satisfy that sense and taking it to areas where it can engage in this is important. However, do bear in mind, that when it gets a scent, it is liable to take off - so keep the dog on lead, or a long line, or ensure that the area is closed off.

​After its play/walk session, this lovely dog is happy lying on your sofa - it does like comfort!

​It is a good watch dog, but not a guard dog. It may be initially reserved with strangers and may bay and howl. However, once it has met anybody once, that person is often treated as a long lost friend.

Satisfy the scenting with treats hidden around the garden and games that involve scenting.

On average this breed loves to have the company of both humans and other dogs and dogs and does not do well being alone. However, as with all dogs,  you must make sure that your dog has been well socialized so that it will accept another dog into the home.

Having two pups from same litter is not a  good idea. Most people think that the pups will be happier with a playmate and won’t fight if they are family. The truth of the matter is that your two pups are likely to:

On average they do well with all dogs and really dont like to be alone, however, remember to socialize with other dogs right from the dog being a puppy.
Do they get on with other animals?

If well socialized to them as a pup as part of the home, it can work and they can become friends. However, we have to remember that this dog was bred to go after prey and it is possible for this innate behaviour to come to the fore, especially if a cat is running, for example.
​
​Are they good with children?

The Black and Tan Coonhound can be gentle and tolerant with children, but it may be too independent to satisfy a playful child and they can also be rather boisterous when playing, so older children would be the better option. As with all dogs, the dog should be well socialized to all ages and sizes of children at the crucial 3 - 16 week period to really accept them easily.
Health

Black and Tan Coonhounds are generally healthy, although there is some risk of hip dysplasia. Always make sure that the breeding pair have been tested to be free of HD, so as not to pass onto the pups. Other problems are eye problems, ear cancer and other ear infections so always make sure the ears are clean, and check them daily.

This breed is also prone to bloat, so supply 2 to 3 smaller meals per day and ensure that there is no heavy exercise at least an hour before eating and 1 - 2 hours after eating. When exercising, prevent them from drinking too much at one go - rather take the bowl away and then give again, a few minutes later to prevent bloat. Speak to your vet about bloat and follow their advice to prevent.
​
“In today’s age, with the rising cost of veterinary care, it really is a wise decision to consider medical insurance for your pets. Depending on the plan you choose, you can ensure that if your pet does develop one of the health issues the breed is prone too, that you will be covered –additionally, just knowing that any accident your pet may have will be covered, will out-weigh the monthly insurance fee for most pet owners. Our own personal choice is Genricpet as they have a ‘no limit’ policy and their rates are comparable to the rest of the industry. To find out the questions and things to look for in a Medical Insurance, please just follow this link”