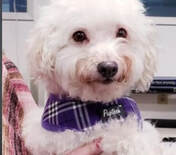 Pic - Bichon Frise Rescue - If looking for one of these cuttie pies please do contact a Breed Rescue first and foremost. They have a wealth of knowledge on the breed, help to pair the right dog with the right home, and can help point you in the right direction. Link below, but if not near you, do search for a rescue that is. https://bichonrescueoc.org/
General

This is one of the hypoallergenic breeds, so ideal for those that suffer from allergies.

These lively and affectionate dogs found their way from the Mediterranean area to the Canary Islands, specifically to the Island of Tenerife, possibly as companions to sailors, who may have used them to barter. They then ended up in Italy in the same manner, where they attracted the attention of nobility and merchants. This is where the Lion style type of grooming of this breed seems to have originated.

Late in the 1400's France invaded Italy and this breed spread to France where it again found favout with royalty, nobality and upper class merchants due to King Henry loving his Bichon so much that he carried it everywhere with him - the rest of his court then followed suit. From this time on-wards, it was not unusual to see this lovely little dog portrayed in paintings.

The breed was then recognized in France, Belgium and Italy as a breed, but it was the development of the breed in the USA that brought about the recognition in other countries of the world.

These are lovely, cuddly and adorable dogs. They do not need excessive exercise, but do need basic training, especially when doors are open, as they will make a dash for outside!

​Being a toy dog, one has to be careful not to drop, or injure such a small body.

Even though this is a small breed, it is still important to take it for puppy socialization on on going socialization to keep the social skills in place. One of the mistakes people seem to make is presuming that just because a breed is small in stature that socialization is not required. Another mistake often made, is to pick up the dog when a bigger dog comes along. There is a fine line here, you do not want to reinforce making the dog scared of bigger dogs, however you do not want the breed to be hurt by another dog.

They are a very adventurous breed, and will think nothing of sneaking between your legs when you open the door to go for an adventure. Training for situations such as this is required.

They do require regular grooming, so be prepared to pay for professional grooming. Highly motivated owners can learn the technique, but it isn't easy and requires a lot of time.

This is not a breed to be left alone for long periods of time. It is advisable to train some Alone Time training right from being a pup, so that the dog can cope being by itself for a period of time - they are well known for developing separation anxiety.

They are known to be hard to house train in general, so extra attention has to be be given to avoid accidents in the home.

This breed can live up to 17 years of age, so be prepared to have this lovely little companion for a long time!
Should you have 2 of the same, or 2 pups together?

On average the Bichon frise, does not tend to be aggressive to other dogs, however you must make sure that your dog has been well socialized so that it will accept another dog into the home.

On average yes. However the earlier the dog is socialized with different animals the better.
​Are they good with children?

​Oldrer children are better, espeically when a pup, as then they are incredibly small, and a small child can easily hurt the breed. As with all dogs, they should be exposed to children of all ages and sizes when a pup and the child shown how to interact with a dog and how to pick it up.
Health

Here are some of the common health problems that can occur: - HD (Hip Dyspacia), Patellar Luxation, Legg-Calve-Perthes Disease, Kartageners's syndrome. They are also prone to ear problems, so checking and cleaning the ears a few times a week is recommender,
They also tend to be prone to skin allergies and some of them are genetically predisposed to cataracts.