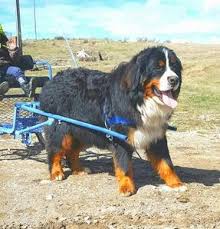 Bernese Mountain Dog is one of the 4 breeds of Seeenhund-type dogs orginating in the Swiss Alps and the only one with longer hair. Sennenhund derives from the word Senne - which means 'alpine pasture' in English, as they accompanied the dairymen and herders who were called Senn. Berner, or Bernese in English refers to the area they originated from. Hund, means 'dog'

This breed was kept as a farm dog, and as it is very versitile, was used for pulling cards, herding cattle and as watchdogs. They are loyal companions and make good family dogs.

They have a lovely disposition being calm and very friendly and do well at shoing, obedience, herding, carting, and herding. They are often known as Berners.
​Is this the right dog for you?

Overall this calm, friendly dog seems happy to be a couch potato, however they need exercise, but walk this breed when cooler - with their thick coats they do not do well with heat.

Although, on average, they are known to be friendly, they can be shy and very aloof with strangers and as bred as a watchdog as well, will hold its ground if need be. Due to this they must receive a lot of early socialization, especially as they can be nervous to some groups of people if not socialized early - example, men with hats on, or who have beards and sunglasses.

This is a 'big' dog and would not suit a small home, where it would be very much in the way. They do not do well being alone and separation anxiety easily starts to occur. Although they do not need a lot of exercise, the garden should be of a good size so that the dog can romp and play without being too restricted.

They can be stubborn dogs, especially around the adolescnce age, and the male of the species more so.

If you dont like dogs that shed and drool, then this breed is not for you! Given their size, they do eat a lot, so be aware that you can have some heft food bills in front of you.

Being a giant breed, they do not have a long lifespan, and for the same reason, they are prone to health problems. Medical insurance is always a good option to have, especially with a dog prone to so many health issues.

On average the Bernese Mountain dog gets on well with other dogs, however you must make sure that your dog has been well socialized so that it will accept another dog into the home.

When it comes to which sex get on better, your best bet is one male and one female (both sterilized), or 2 males together. Never two females. The vast majority of the time two females will get on well until about 8 - 9 months of age and then fighting for position tends to occur. When males have the odd altercation, it tends to be over quickly, but with females, it just intensifies and often the only solution is for one of the females to be rehomes. This is not just for this breed, but in general.

Yes, on average they do, however early and continued socialziation is always the safest bet.
Do they get on with other animals?

On average they do well with other animals, although it is a good idea to socialize them with them right from being a puppy.

This breed is well known to be excellent with kids. They are calm, easy going and love to be around children and are surprisingly gentle despite their size.
Health

As we mentioned above, they do not have a long lifespan, being only about 6 - 8 years. Many succumbing to hereditary cancers, or terrible elbow of hip dysplasia.

They are also prone to bloat, so rather feed 2 - 3 smaller meals during the day. Do not engage in heavy exercise an hour before feeding and 1 - 2 hours after feeding. Also be aware not to allow the breed to drink too much water in one go, as this can also lead to bloat.

Other health problems this breed is prone to are autoimmune diseases, blood-clotting disease, epilepsy, heart disease, and hereditary eye diseases which can lead to blindness.