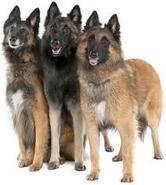 In addition to their long silks coats, these dogs are also very clever and extremely hardworking.

The Tervuren (or Terv as often called), is one of 4 types of Belgian sheepdogs, with the other 3 being the Belgian Malinois, the Groenendael and the Laekenois. These dogs all look similar as they are the same size and build, but what sets the Tervuren apart is the gorgeous coat.

This breed came about in Belgium in the late 19th century and named for their place of origin - Tervuren. They were bred by a Mr. Corbeel who owned two dogs who went on to become the breeds foundation pair.

In addition to being a working dog, this breed can be very sensitive and shy, so having them meet a lot of people when a pup will help to build confidence and avoid lots of shouting and yelling as they don't like this on average. Socializing is crucial, as they can be aggressive if not properly socialized - as the dogs were also bred for guarding purposes, this is not surprising.
​
They are very loving and very clever, picking up new skills in no time at all - and throughly enjoying the process.

These are very much working dogs and are incredibly versatile. In Belgium they are often used by the police, and are know to do very well at a canine sport called Schutzhund. Today, you can find them performing as police dogs, service dogs, show dogs, scenting lost people, sniffing out explosives, and herders.

​Not the easiest breed for a first time dog owner, better with owners that have had some experience.

As mentioned above, puppy socializing and further socialization is necessary. They tend to get bored, so mental and physical stimulation in and around the garden is suggested.

These dogs are not one's that do well being left alone in the garden - they are 'people's' dogs and nothing makes them happier than being with their people.

Unless you can provide this dog with training, a lot of exercise and sufficient attention, rather give it a miss and look for a dog that does not need as much physical exercise. 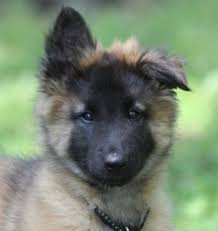 As long as your existing Terv is well socialized and used to other dogs, bringing in another one should not be a problem. It must always be the opposite sex, or else two males together. Two females together, regardless of the breed, is a definite 'nono'.

Having two pups from same litter, even another litter, or two different breeds, of about the same age is not a  good idea. Most people think that the pups will be happier with a playmate and won’t fight if they are family. The truth of the matter is that your two pups are likely to:

Do they get on with other dogs?

The key to this is early and continued socialization. Although they may get on well with dogs outside the family environment, they can become very protective and possessive of their own space, so do seek professional advice is considering getting another dog.

​As they have a very high prey drive, they will tend to chase cats and small animals. It is advisable to socialize them with small animals while pups.
​Are they good with children?

Coming from the Herding group, they may try to herd both adults and children, even nipping at them slightly. Training from being a pup will prevent this happening. The breed loves their families and are very protective of them.

Early socializing is always the preferred way to go, so socialize your pup to children of all ages and sizes as often as possible. ​
Health

Many of the large chested breeds are prone to bloat and this breed is no exception. To avoid Bloat, don's do heavy exercise an hour before eating, and 1- 2 hours after eating. Rather feed two or three smaller meals a day and avoid the dog drinking large quantities of water at a time. Some of the dogs that are prone to Bloat, do better is the bowl is lifted a bit off the floor.

Due to poor breeding, some breeds are prone to certain genetic health problems so always make sure you get from a KUSA registered breeder. The more common concerns are elbow and hip dysplasia (HD), osteochondritis dissecons, progressive retinal atrophy, cataracts, epilepsy, autoimmune thryoiditis, von Willebrand's disease and allergies. Another area where they may have problems is with their teeth, so make sure you get into the habit of daily cleansing.