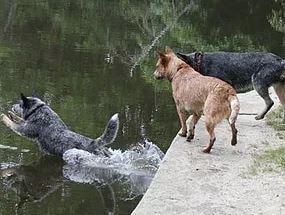 Pic - Australian Cattle Dog. If looking for one of these brilliant dogs, do contact a Breed Rescue first. They have a wealth of knowledge on the breed and can pair the right dog with the right home. link below and if not near you, please do a search for one that is. https://www.acdra.org/
General

Back in the 19th centuary a NSW cattle farmer called Thomas Hall, from Northumberland,  crossed the dogs used by drovers, with dingos he had tamed. The resuling offspring were knows as Halls Heelers. After Hall passed in 1870 the became more wildely available. They were subsequently developed into two modern breeds, being the Australian Cattle Dog and the Australian Stumbp Tail Cattle Dog.

Depending on their colour, they have been knicknamed Red or Blue Heelers - due to the colouring and how they will nip the cattle to get them to go where they want them. The Blue Heelers are also often know as the Queensland Heelers.

As with many of the working dogs, the Aussie has very high energy levels and is extremely clever. According to Stanley Coren's The Intelligence of Dogs the breed ranks as one of the most intelligent breeds and gained 10th place in his research.

If you are a couch potato or looking for a companion to snuggle up to on the couch, then this breed not for you. They require daily exercise and not just physical - due to its intelligence this breed loves solving problems and puzzles, so  behaviour games, tricks, working trials etc,  would help to stimulate it as well as various scent trails that can be placed around the garden.

This dog needs obedience work and any owner must be prepared to take the dog to both Puppy Socializing and also further obedience classes - socialization must be kept up and to satisfy the high levels and the intelligence of the dog, activities such as herding, trials and agility are also recommended.

The Australian Cattle Dog can be the friendliest of companions although it has been known to respond to danger, without the owner requesting, and protect them from a perceived threat.

This breed was taught to nip the heels of reluctant cattle, and it may do this is not treated correctly, or if herding the children in the home.

This dog can be aggressive if not correctly socialized and trained. Surveys of US breed club members showed that both dog and stranger directed aggression were higher in the ACD than the average breeds studied.


On average the Border Terrier does not tend to be aggressive to other dogs, however you must make sure that your dog has been well socialized so that it will accept another dog into the home.

​They can do if they were raised with other dogs from being a pup and the necessary socialization done. However, as with the Bullie breeds, this dog does better as an only dog, especilly as it is so close to its owner that resource guarding could occur, resulting in squabbles or fights.
Do they get on with other animals?

​When the ACD is raised with ohter small animals such as cats, it can learn to live with them, however it does have a very high prey drive, and especially is another animal runs, it may give chase.
​Are they good with children?

​As a herding dog, there will always be the chance that the dog will try to herd and chase children and may even nip them on their heels. When brought up with children, he can be very good with them, although best suited to a family with older children.
Health

The Aussie is prone to hereditary deafness, which is believed to be because the breed carries a recessive piebald gene, which often leads to deafness.

Other diseases they are prone to are PRA (Progessive Reginal Atrophy) which can lead to blindness. HD (Hip Dysplasia) is seen, but not often and breeders are very careful with breeding programs in order not to carry this forward.

Other conditions are Spondyloses, elbow dysplasia, arthritis and reproductive concers such as pyometra.