Artificial legs now a reality for our pets

Friends of the Dog

In an article in Cape Argus, it said "Owners with injured pets now have the option of getting their four-legged friends prosthetic limbs, rather than amputating an entire leg. Dr Megan Kelly, a vet at Holisticvet, an animal wellness and rehabilitation clinic in Diep River, a prosthetic limb can increase the lifespan of a pet that would otherwise have to walk on only three legs.

“Prosthetics are a new side to physical rehabilitation for animals. It’s regularly done in the UK, Europe and the US,” said Kelly. Kelly said during the past year she has been contacted by at least eight clients wanting prosthetics for their animals. But, she says, unfortunately, they were all too late.

“The problem is that they call me after the vet has amputated, and then it is usually too late.
“Vets are taught to amputate as high as possible and when we attach the prosthetic, we need some bone to attach it to,” said Kelly.

Dogs, cats, bunnies and even horses with fractures, ligament ruptures and arthritis can have prosthetic limbs custom made for them, if their conditions allow.

“Animals can cope quite easily on three legs, but the over-extension of the joints on the legs opposite to the amputated leg cause pain and discomfort. “They can also suffer from spondylosis and neck problems,” said Kelly.

“It depends on the size of the dog. If the dog’s on medical aid, some companies cover prosthetic surgery because it also decreases the cost of treating arthritis. “With other animals, the prices vary according to the size of the animal,” said Kelly.

from FOTD - on doing some research on this topic we came across Rehab-a-Pet (http://www.rehabapet.co.za/) that has a wide range of various prosthetics, wheel chairs,  booties, body harnesses, drag bags etc. What is very helpful is that they have prices next to the products so it gives one an idea of expected financial expenditure.

In an article courtesy of www.canineconcepts.co.za - Claire Grobbelaar, they site the following on how prosthetics have been fitted to dogs overseas.
​Medical advances making it possible for dogs like Cassidy to romp on all four legs

An injury prevented Juniper from walking normally. Frostbite damaged the hind legs of Meadow - and Andre gnawed off his paws to escape from a wolf trap.

Until a few years ago, there wasn't much hope for these and other disabled animals of ever leading normal lives again. But thanks to advancements in veterinary medicine and the small but growing field of animal prosthetics, it's not possible for pets and farm animals with missing limbs to walk, run and romp on all four legs.

Cassidy, a shepherd mix, with a caramel-colored coat, was recently outfitted with a carbon fiber leg similar to ones that amputee runners use.

"We just came back from the beach and he's able to run all day," said Cassidy's owner, Steve Posovsky, a retired dentist in Delray Beach, Fla. ​
eterinarian Denis Marcellin-Little and his colleagues at North Carolina State Universite in Raleigh - so that a custom prosthetic limb could later be screwed into the visable tip. The result is an artifical leg that behaves more like a natural limb.

"It's not that different from a total joint replacement," said Marcellin-Little of the surgery. "And clearly, we have a lot of experience fixing joint prosthetics to bone. That's done in hundreds of thousand of people each year worldwise." ​Entire limbs cannot be replaced, he said.

In Cassidy’s case, it’s taken 18 months between the surgery and receiving his permanent prosthetic leg in March.

“It’s not simple, cheap or quick,” Marcellin-Little said of the process. That’s because all equipment is designed and hand-built for each patient, and the experimental surgery must be rehearsed beforehand to make sure it goes smoothly.

It takes around three months of healing time before weight is put on the leg; the animal then must re-learn how to walk on all four feet.

For six weeks, Posovsky patiently helped Cassidy inch across the bedroom, putting one leg in front of the other. The hours upon hours of training finally paid off when one morning Cassidy began to walk on his own.
For most animal owners, externally attached prosthetics are a faster, less-expensive option 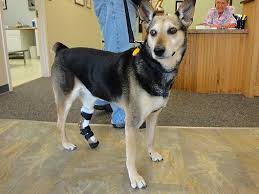 rthoPets, in Denver, manufactures prosthetics and braces for about 1,200 animals worldwide each year. Most are dogs, but they’vealso worked with cats, cows, birds, llamas, horses, even an orangutan.

“We joke that if it has an appendage and a heartbeat, we can usually help out,” said Amy Kaufmann.

She started the business six years ago with her husband, Martin, who previously worked in the human prosthetics field.

The external prosthetics are built to “last a lifetime” by using tough industrial grade plastic, said Kaufmann. To combat chafing and irritation the devices are lined with special color-changing foam that turns black, alerting owners if a problem arises.

For an animal to be outfitted with an artificial limb, which is attached with straps, Kaufmann said front legs must still have the elbow joint and part of the radius and ulna. The knee joint, as well as part of the tibia and fibula, must be present on rear legs.