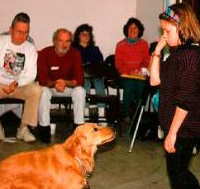 The Alpha Fallacy
It is popularly held that rank is established and maintained by physical strength and dominance and that the more dominant (i.e., higher ranking) dogs are more aggressive. Hence, dogs that frequently threaten, growl, fight and bite are often assumed to be “alpha” animals. Not so Joe! The above assumptions are quite awry. Not only do they betray a theoretically simplistic view of a most sophisticated social structure but also, such notions tend to be counterproductive, inhumane and dangerous when cavalierly extrapolated to dog training, or the treatment of behavior problems.

In reality, a growly, macho topdog is a rare find. Topdogs seldom growl — they don’t need to. A true topdog is usually a pretty cool customer, who is secure and confident of his (or her) privileged position and has no need to fluster and bluster to bolster up his rank. Moreover a true topdog is more likely to share a toy, a bone, or a sleeping place, than fight over one. On the other hand, bottom-ranking dogs rarely growl either. The prime directive of a low ranking individual is to maintain a low profile. Barking, growling and snarling only draw unwanted attention and if it came to a fight, the underdog would most certainly lose.

A topdog has little need to threaten and an underdog would be crazy to. Without a doubt excessive growling and repeated fighting are indicative of an underlying insecurity and uncertainty about social rank vis a vis other dogs. Protracted, blustery displays of aggressiveness are the hallmark of middle-ranking males.

Subordinance Hierarchy
When the framework of a successful hierarchy is viewed in a developmental context, it becomes apparent that subordinance hierarchy is a more descriptive term for canine social structure. Maintenance of an existing hierarchy depends on underlings advertising their respect for higher-ranking individuals. The status quo is maintained because, lower-ranking individuals seldom challenge authority and so only occasionally, is there need to enforce higher rank with a display of physical, or more likely psychological, dominance.

Growing up around larger pups, adolescents and adult dogs, puppies simply cannot compete on the social scene in view of their smaller size and inferior physical and psychological strength. Thus, puppies learn their station in life well before they become sufficiently large and strong to be a threat to the established order. Most adult dogs are quite lenient with young pups until they approach adolescence, whereupon adults (males especially) relentlessly pursue, stand-over and growl at the adolescents (males especially). Even so, harassment by adult dogs is largely psychological, rather than physical. It would be a perversely undersocialized adult dog, which physically beats up young puppies.

Nonetheless, during the crucial puppy/adolescent stage of hierarchical development, youngsters are perpetually intimidated and harassed by adults and understandably learn to respond with exaggerated appeasement gestures to assuage the torment from their elders. Moreover, young adolescents quickly learn that bother from older dogs may be largely prevented by taking the initiative and demonstrating active appeasement before they are harassed. The pups' preemptive apology characteristically comprises: a low slung, wriggly approach with ears back, submissive grin and with tail and hindquarters awag. The youngster may paw the brisket and lick the muzzle of the older dog. The infantile pawing and muzzle-licking food-soliciting behaviors of puppyhood now acquire new meaning and are retained as neotenic appeasement gestures in adolescence and adulthood. In addition, the underdog may rollover and lift a leg to expose his inguinal region. And some may submissively urinate. Adult dogs may determine the age of a puppy/adolescent from the smell of the youngster's urine.

From this stage on, higher-ranking dogs need only chastise those individuals that do not voluntarily show deference and respect in their presence. Fighting and physical dominance rarely come into play during the maintenance of hierarchical harmony. On the contrary, the major function of hierarchical structure is to lessen the amount of fighting. Once established, the hierarchy provides most of the solutions before problems arise. For example, when there are two dogs but only one bone, the ownership of the bone is pre-decided and therefore, there is nothing to fight about.

As a role model, we should always bear in mind the geriatric Yorkie, who habitually lords it over the two-year-old Great Dane. Any attempts in physical domination would no doubt end in one gulp. Instead the Yorkie patiently and gently, yet confidently and firmly trained the Great Dane by defining and setting limits for appropriate behavior. The Yorkie had the forethought and common sense to take the time to train the Great Dane at the right time — when he was still a puppy. Perhaps we should learn from this and do the same with pet dogs. Indeed, using brain over brawn to educate young puppies is the only safe, expedient and efficacious means for children to gain respect from adult dogs. Mental control is the key to success.