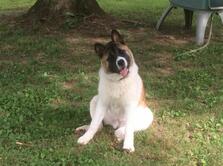 Pic - Akita Rescue. if you are considering getting an Akita, please, first and foremost, do consider rescue. Breed rescue does a wonderful job and is really great at pairing dog to home. link below and if not close to you, do search for one that is. https://akitarescue.rescuegroups.org/
General

This is a large breed of dog that origintes from the mountainous region of Japan. There are 2 separate varietes of Akita - The Japanese strain, commonly known as 'Akiota Inu' and Inu just means dog in Japanese. Then there is the American strain, just called the Akita or American Akita.
The Japanese strain has a very narrow palette of colours, while the American strain comes in all different colours. They are considered as two separate breeds in all countries, with the exception of US and Canada.

In Japanese history the Akita, was a bear, Boar, and deer hunting dogs and is one of the oldest of the native dogs. Today's Akita was developted primarily from dogs in the northernmost region of the island of Honshu, in the Akita prefecture - thus providing the name. The dogs would track their quarry and keep them in place until the hunters arrived.

The most famous Akita of all time was Hachiko, the most revered Akita of all time, helped push the Akita into the international dog world. Hachiko was born in 1923 and owned by Professor Hidesaburō Ueno of Tokyo. Professor Ueno lived near the Shibuya Train Station in a suburb of the city and commuted to work every day on the train.Hachikō accompanied his master to and from the station each day.] On May 25, 1925, when the dog was 18 months old, he waited for his master's arrival on the four o'clock train, but Professor Ueno had a fatal brain haemorrhage at work.Hachikō continued to wait for his master's return.[16] He travelled to and from the station each day for the next nine years.[16] He allowed the professor's relatives to care for him, but he never gave up the vigil at the station for his master.His vigil became world-renowned.

The Japanese Akita and American Akita began to diverge in type during the Post–World War II era.
Recognized by the American Kennel Club in 1955, it was placed in the Miscellaneous class. It was not until the end of 1972 that the AKC approved the Akita standard and it was moved to the Working dog class, as such, the Akita is a rather new breed in the United States.
​Is this the right dog for you?

This beautiful, but large and powerful dog is not one for a first time dog owner. It can be very territorial about its property, reserved with strangers and even aggressive towards them, so it is crucial that it receives early Puppy School socialization and the socialization, towards people and dogs that is ongoing. The breed has been targeted by some countries breed-specific legislation as a dangerous dog. An Akita, no matter how well trained, should never be let off-lead where other dogs are around.

According the the AKC (American Kennel Club), this breed needs about 2 hours of exercise per day so if you are considering one, this is an aspect to take into account.

They are also known to be very heavy shedde'rs.

When it comes to training, they are not always the easiest dogs, not because they are stupid - they are not, rather due to their dominant nature they can be stubborn and do not enjoy repetition - due to this, chop and change the training around to keep the dog motivated.

Although this breed makes an excellent watchdog, it is a dog that should live inside the home, rather than outside - their family is the most important thing to them and they are fiercely loyal.
Should you have 2 of the same, or 2 pups together?

NO.  As a matter of interest, here is some info on why we do not recommend 2 pups in the home at the same time, regardless if from the same litter or not and we have given you some info on this for your own knowledge.

When it comes to which sex get on better, your best bet is one male and one female (both sterilized), or 2 males together. Never two females. The vast majority of the time two females will get on well until about 8 - 9 months of age and then fighting for position tends to occur. When males have the odd altercation, it tends to be over quickly, but with females, it just intensifies and often the only solution is for one of the females to be rehomed. This is not just for this breed, but in general.

​ No. will necessarily have the same temperament.
Akitas tend to take on a socially dominant role with other dogs, and thus caution must be used in situations when Akitas are likely to be around other dogs, especially unfamiliar ones

​Akitas tend to be less tolerant of dogs of the same sex. For this reason, Akitas, unless highly socialized, are not generally well-suited for off-leash dog parks. Sometimes spontaneous, it needs a confident, consistent handler, without which the dog will be very wilful and may become very aggressive to other dogs and animals and they will not back down. They also tend to be more aggressive to same sex dogs. ​
Do they get on with other animals?

No, on average. However if brought up with a cat, for example, it is possible to have a good relationship.

​Are they good with children?​

When socialized with children and trained to be family members, Akitas will accept children of all ages and sizes.  It is, however, totally up to the parents and how they train their children!  ​
Health

As with most large breed dogs, the Akita can be prone to bloat. To prevent this, do not feed for an hour after heavy exercise and 1 - 2 hours after eating. Food should be given in 2 - 3 smaller meals per day, and never let this breed drink a lot of water in one go - this can lead to bloat. Hip

On average, this is a sturdy, healthy breed, but some of the conditions that they are prone too are:- HD (Hip Dysplasia), Hypothyroidism, PRA (Progressive Retinal Atrophy, Sebaceous adenitis.


​ “In today’s age, with the rising cost of veterinary care, it really is a wise decision to consider medical insurance for your pets. Depending on the plan you choose, you can ensure that if your pet does develop one of the health issues the breed is prone too, that you will be covered –additionally, just knowing that any accident your pet may have will be covered, will out-weigh the monthly insurance fee for most pet owners. Our own personal choice is Genricpet as they have a ‘no limit’ policy and their rates are comparable to the rest of the industry. To find out the questions and things to look for in a Medical Insurance, please just follow this link”
Do’s and Dont’s