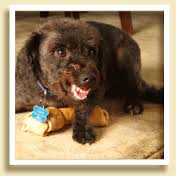 ​What is aggressive behaviour?

In this article we are referring to aggressive behaviour, however, we prefer the terminology ‘reactive behaviour’ – in other words the pup is reacting to something it is not happy about. This helps to put a different spin on the behaviour, and you can examine why it is happening and then take the steps to change the behaviour.

We are not talking here about a puppy chewing on you and biting down too hard when being played with, although this is also not acceptable and the pup should be taught that human skin is not something to chew on (it hurts!),behaviour such as this, is not actual aggression.

If you look carefully at the pups body language, you may see early threats of aggression in that the pup’s body may go stiff, the body goes still, the ears go back, the eyes harden, or the muzzle may be drawn upwards a bit into a snarl, and the muzzle hairs stiffen. Not all owners are aware of these early signs, and may only notice the aggression when the pups growls, bears teeth, lunges with the intent to nip, or actually nips or bites.

The most common type of aggression from a pup is if you go near it while it is eating out of its bowl, or chewing on a delicious chew bone, it will growl at you.

Other times the pup may become aggressive when you go to lift it off a comfy chair, when you try to pick it up off the floor, when you try to give it a cuddle, and some pups don’t like it when you touch certain areas of its body, and they will react with aggressive behaviour – very often the feet, tail, ears and mouth areas.

Another common occurrence is the pup that shows aggressive behaviour towards other pups when it first goes to puppy school.

Aggression is always something that should be taken seriously, and if you are in any doubt at all as to how to handle it, rather call in a qualified canine behaviourist, who can show you how to change the behaviour, and also determine as to why it is actually happening.


How to avoid aggression

a. Swapping toys – have two identical toys such as two ropes the same – or toys that are not of major value to the pup and they must be the same. Kneel on the floor with your pup, and place one rope behind your back. With the other hand start to play with your pup with the other rope, dragging on the floor (like prey) to build excitement levels. Word of warning don’t let your pup get too excited!

b.As the pup grabs onto the rope and starts to pull, bring the other toy from behind your back and show it to your pup. As the pup starts to let go of the rope in its mouth, says ‘swap’ and immediately give your pup the other rope.  This is practiced over and over, and client can build up to using toys of more value.

c.Toy/object for food – start off with lower value toy and this time instead of two toys use one low value toy as above, and a high value apiece of food hidden behind your back. Build up the play as above and just as the pup starts to play tuggy, bring the treat our from behind your back, and hold it right in front of the pup’s nose. As the pup starts to release the toy in order to get the treat, say ‘swap’ and give the treat, as you take the toy away. Immediately give the toy back.
d.This is also built up with objects of higher value and you can eventually swap a bone for another bone. Just remember that what you are offering must be of higher value to the pup than what is in its mouth.

Points to bear in mind


A good puppy school will teach you the Swap Exercise, as well as the Leave exercise and will probably go over Food Bowl exercises and how to do them as well. The importance of taking your pup to a top Puppy School cannot be stressed enough.