Tyson and Nebraska were born about six years ago, on a plot outside Johannesburg. Aptly-named Tyson is a big, barrel-bodied, boisterous, brindle male with the widest Staffie smile you’ve ever seen. His sister is the gentlest soul, lapping you up with her eyes – and if she could physically crawl into your heart from more love, she would.
Their story begins when they were bred to be sold. But they were not sold as Staffie puppies; they were sold as pitbulls. And while they didn’t end up as fighting dogs, they were raised as outside guard dogs and relegated to a small patch of garden. As teenagers they were sadly abandoned there. Luckily, a kind neighbour, fond of them, adopted them, and although they got to go on walks and sleep inside, it was difficult for Tyson and Nebraska to cope with his long hours at work, seven days a week.

When Tyson and Nebraska were around five years old, their owner decided to move. He was going to a plot where an existing pack of nine dogs required the pair to integrate and find their place in the hierarchy. The introductions were done carefully and slowly and after several weeks, they moved in.

It was a huge adjustment for all the dogs. And now Tyson and Nebraska had to compete for attention, as well ‘know their place’. It wasn’t easy… and it was going to get much harder… Nebraska chose to remove herself and slept alone outside. Tyson, who was used to being in charge, struggled with his demotion to ‘underdog’.

And then, their world fell apart - the sudden death of their owner left them confused and their future uncertain…

Staffordshire Bull Terrier Rescue SA was contacted and without a moment’s hesitation, they were willing to make space at their kennels – and even collect Tyson and Nebraska. But once again, kind neighbours stepped in and allowed them to stay with their pack of nine until a new home was found – to not add to the stress and trauma they’d already been through by removing them.

Finding a new home
​
The search was now on for a perfect home. Being breed experts, Stafford Rescue understood the importance of the right owners and a Stafford-proof environment. They also wanted the right fit for Tyson and Nebraska’s individual needs – he’s afraid of storms and she’s easily bullied. By asking many questions about them, a detailed profile for each dog was drawn up, including their history, personality and health status. The networking could now begin. Stafford Rescue worked tirelessly and scrutinised every option in Gauteng and beyond. And then… a potential home!

More questions and answers followed, which Stafford Rescue passed on to the potential owners, as well as photos showing Tyson and Nebraska’s level of socialisation – them hanging out with the pack and going to the dog park. The potential home became a definite.

Making a miracle all in a day’s work…

And what a perfect home it was – people at home a lot of the time, who understand and love Staffies (as well as their storm-phobia), have a big garden, the beach nearby, and best of all – they have grandsons to play with Tyson and Nebraska. The Staffies would finally have their own family. Having never met Tyson and Nebraska, Deryck and Debby Eddy were nevertheless willing to open their hearts and their home to them, and had full trust in Stafford Rescue’s vetting of the pair.

But to get there, these Staffies had to fly! The focus shifted to getting their vaccinations up to date and making travel arrangements. Lauren from Stafford Rescue met Tyson and Nebraska at the vet and facilitated their shots and microchipping. Then, as fate would have it, the national lockdown was announced and all flights would be cancelled. Stafford Rescue went all-out to make the trip happen and managed to squeak Tyson and Nebraska in on a flight the day before lockdown. They then kicked into high gear with their pet travel partner to ensure a stress-free, organised and comfortable journey.
And so, Tyson and Nebraska were taken to the airport and with a heavy but happy heart, handed over for crating. They found all this terribly exciting and lavished their Staffie kisses on everyone. Soon they were winging their way to the coast and touched down two hours later, where their new  mom and dad were waiting to receive them. The new family then took them on a short road trip along the coast and they finally arrived at their new home. And in heaven…

A heartfelt thank you to Staffordshire Bull Terrier Rescue SA and Deryck and Debby Eddy for making Tyson and Nebraska’s happily ever after possible. 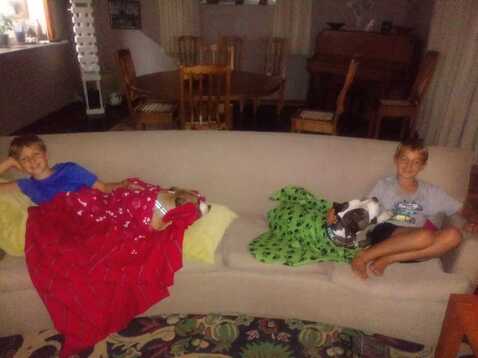