blog.worldofangus.com
​(a lovely site with lots of 'happy endings' stories as well)
Let's take a look at some of the glaring inadequacies of Breed Specific Legislation. 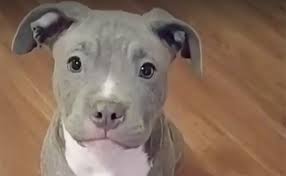 It’s no surprise that Breed Specific Legislation (BSL) is a hot topic right now. More people are realizing that banning a certain breed of dog – based entirely on physical traits – is inadequate and ineffective, to say the least. With the popularity of pit bull type dogs rising daily, more cities, counties, and countries are quick to pull the trigger on breed bans.
This week, Premier Philipe Couillard of Quebec announced that the province is looking to follow Ontario’s example in legislating Breed Specific Bans. This means that, by next year, pit bull type dogs may be completely prohibited in the province of Quebec.
​
Though banning an entire breed may seem like the proper solution to combatting dog attacks – do we detect a hint of sarcasm? –, this method has proven repeatedly to not only be ineffective, but bring forth more issues.
Let’s take a look at some of the glaring inadequacies of Breed Specific Legislation.

First of all, we must look at the way these “pit bulls” are being identified. The “Dog Owners’ Liability Act and Public Safety Related to Dogs Statute Law Amendment Act, 2005” contains seven sections pertaining to “pit bulls,” non of which actually describe the breed. A little odd, considering this is where people are asked to go for more information on the law. There is a small QA section at the bottom, where the breeds are listed.
Each section uses the word “pit bull,” rather than the breed’s correct name, American pit bull terrier (APBT). According to the state of Ontario, the word “pit bull” describes anything closely resembling an American pit bull terrier, American Staffordshire terrier, or Staffordshire bull terrier. This vague identification process targets any dog with a blocky head, large chest, and broad shoulders. This also includes mix breed dogs with similar physical traits, but no actual APBT genetics.
Many dogs have been wrongfully confiscated and euthanized based on having similar physical characteristics to a pit bull terrier, including Labradors, the “family dog”.
Creating a breed ban based on physical traits alone is the animal equivalent to racial profiling.

2. Less Pits More Attacks
​
Since Breed Specific Legislation was put in place in Ontario, there have been substantially more recorded dog bites. In 2005 when pit bull attacks were at their highest, there were 1,411 pit bull type dogs registered in the city of Toronto. By 2014, there were only 338. The number of bites by pit bulls decreased, but the number of bites by other breeds reached their highest level in the century. 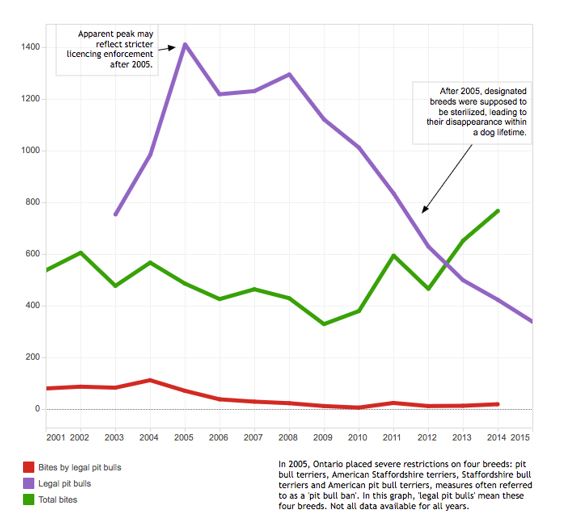 ​Dog bite statistics are based on reports made by doctors and physicians. Any dog bite recorded is entered into a database used for research purposes like this. While the number of bites by pit bull type dogs had decreased, the number of bites by Labrador retrievers, shih tzus, and golden retrievers had risen dramatically. With the increasing popularity of Labradors and golden retrievers, it appears that their bite statistics also increased. 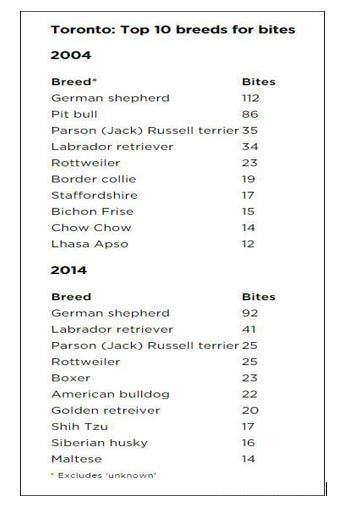 3. Dogs in the Wrong Hands

This brings us to our next point.

Now that we’ve established that pit bull type dogs are seemingly non-existent in the province of Ontario, but dog bites are rising, we must look at the reason why dogs are biting in the first place.
Dog owners are responsible for their dog’s actions. Period. Dogs, regardless of breed, can be trained to be well mannered, or not. A Chihuahua can be trained as a fighting dog just as easily as a pit bull type dog can. Many people argue that there are inherent behavioral traits, but deny the fact that these traits must be provoked.

Dogs, who are owned by irresponsible people, are more likely to become aggressive. Whether the owner is negligent or purposefully training aggressive behavior, their dog will exhibit and portray negative characteristics. This dog will be more likely to bite. The majority of dog bites, especially the ones that are televised, are perfect examples of negligent and irresponsible dog ownership.
In January of 2015, a man was attacked by two “pit bulls” outside a store in Langley, B.C. The dogs were tied to a bicycle and left out front, while the owner was inside shopping. The victim claims he approached the dogs and was instantly attacked. He suffered lacerations, and received 19 stitches in his forearm. The owner of the dogs apologized for the attack, but quickly fled the scene.

This is an example of negligent dog ownership, as the man left his dogs unsupervised, unrestrained, and fled after they attacked the victim. Had the owner been present, successfully secured the dogs, or trained them properly, this incident would not have occurred. Unfortunately, this type of negligence is common for dog attacks, and the owner will not be held responsible for his dog’s actions.

Those pit bulls could have easily been two Labradors, boxers, chihuahuas, or poodles and the outcome would have been the same. One could argue that the damage may not have been as severe had they been smaller dogs, but that does not negate the fact that the dogs would have been aggressive. The owner is to blame in this situation entirely.

Irresponsible dog ownership goes beyond lack of training and negligence, working against the effects of Breed Specific Legislation and breed bans.

Notice that the graph above displays “bites by legal pit bulls.” BSL is only effective based on dog registration. Yes, the number of legal pit bulls in Ontario decreased with the ban, but the number of illegal ones rose. There are more undocumented, unregistered, unaccounted for pit bulls in the province than ever before. This is because all of the responsible dog owners either rehomed their dogs, or left the province when the ban was put in place.

The irresponsible dog owners are not registering their dogs. Therefore, there are countless undocumented pit bull type dogs roaming the province, with little to no training or supervision. That’s scary!
​
Regardless of the breed, an untrained dog is a dangerous dog. By putting Breed Specific Legislation into place, we only scared away the decent owners, and made room for the bad ones. 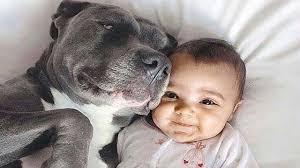 This completely ignores the actual issue, which is the increasing rate of dog attacks. Breed bans do not stop dog attacks, they only reduce bites from documented dogs of that breed. BSL does not hold dogs or dog owners accountable, which we’ve established is the true underlying problem.

Instead of targeting dogs based on their appearance, the war on dog bites should be combatted with laws that promote responsible dog ownership, and laws that protect citizens from truly dangerous dogs. Focusing on one breed, or one set of physical characteristics, has left an entire province blind to the dogs that are deemed dangerous by their actions.

Breed Specific Legislation is designed to temporarily appeal to the public’s fear. It feeds and breeds more hatred towards specific physical characteristics of a type of animal, and is essentially a form of extreme racial profiling.

Besides the obvious “dog racism,” here are a few more negative effects of BSL.
Punishing the Responsible OwnersAs we stated before, irresponsible dog owners are seemingly unaffected by breed bans, as they weren’t keen on following the rules in the first place. The responsible dog owners were the ones who had to relocated their families, give up their beloved pets, or watch their dogs be senselessly euthanized.

An estimated 1,000 dogs and puppies were destroyed under the pit bull ban, between the years of 2005 and 2012. Many of these dogs were part of loving families, while others were young puppies waiting for forever homes in shelters. Almost none of which were deemed dangerous based on their actions.

Despite the growing popularity of Breed Specific Legislation, many cities, counties, and countries have repealed their laws and replaced them with functioning bylaws, due to the overwhelming ineffectiveness of breed bans. More than 100 municipalities in the United States have reversed their laws, and the entire country of Italy has done the same, replacing them with bylaws targeting responsible dog ownership.

CostCreating and reversing bylaws is a lengthy and expensive process. Do you know how much BSL costs you?

Read this article to find out.

We’ve determined that Breed Specific Legislation is not the way to handle dog bites and attacks. So, where do we go from here?

There are many bylaws proven to work, in replacement of Breed Specific Legislation, in efforts to lower the amount of attacks on civilians.