​Please visit and LIKE our Facebook Page and share with family, friends and on your own Facebook page, and ask them to share further – it is only by working together and sharing knowledge and education that we can improve the lives of dogs and assist owners. We do not inundate you with posts – an average of 5 per week, and the odd Did You Know. Thank You!

​Tips for Having Two Puppies Together

Scotty Valadao – Friends of the Dog 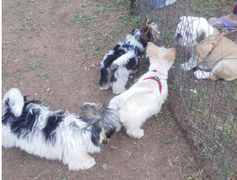 I have heard it said that two pups are double the fun – more like double the trouble and double the work on many occasions! It is all very well saying that people should never get two pups at the same time and the reasons for this are numerous and listed below, however, in the case where the owner does have two pups, better that they have some information as to how to handle this situation and avoid future problems in the future, so we have given you some tips on how to get the best out of this situation.

Alone Time Training
In order that the dogs gain confidence and get used to spending time alone, they should, several times a day especially when pups, spend time away from one another. This is easily achieved by presenting chew toys such as Kong’s and each pup is put away from the other pup and allowed to chew happily. Instead of being alone viewed as a stressful event, it becomes one that is a positive one for the pups.

Walking and playing alone
The pups should be walked separately and if they cannot cope with being alone, then you can start with the exercise for Alone Time to get them habituated to this.
Separate the pups, or have two people working with them separately and also teach them how to retrieve balls separately.

Settle time to avoid over excitement
At times it may seem that all the pups do is run around and play and then eventually just collapse and fall asleep. By giving them regular intervals of ‘settle’ time and doing this before the excitement levels get too high, you will be teaching the pups a valuable lesson of learning how to sit quietly.
The above also helps in the home situation whereby you can have two pups lying quietly and chewing rather than running around the home causing havoc.

Avoiding resource guarding
Dogs are natural resource guarders, in their natural environment they would have to be or they would not survive.
In addition to training the pups not to resource guard, bring in the following as it can keep stress levels down and in my eyes, prevention is always better than cure.​
If you are just thinking about getting two pups at same time, rather don’t. Spend at least 6 months with your existing pup – build up a good bond and good behaviour – ensure the pup is well socialized – then when you are ready, do your homework as to what breeds get on well together and where to get another pup from – good luck.