If your dog has the mutant gene MDR1 and contracts Spiro Lupi, owners should be informed of the effect of  Ivermectin which is often used in conjunction with other drugs in the treatment of this terrible disease on dogs with this gene. Rather get your dog tested for the mutant gene as a safeguard. Dog breeds most at risk include herding and collie-like breeds, especially Australian shepherds, Border Collies and even German Shepherd Dogs. However owners of cross-breed dogs should also be aware of the mutation and test their dogs!! 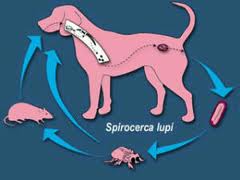 Spirocerca lupi is a worm found in South Africa’s summer rainfall areas that is found more and more frequently. The worm’s eggs are transmitted through the stool of host organism, the dog. In return the stool is processed by the intermediate host, a dung beetle. The dung beetle is then eaten directly by another dog or by a bird, frog or lizard. A dog catches the bird, frog or lizard that ate the dung beetle and the worm’s egg hatches in the dog’s intestines. The worm can then attach itself to the aorta wall or to the oesophagus of the dog where it can cause serious damage.

Prevention is always better than cure and eradication of the worm infection is a long and difficult road. One form of treatment is the use of a combination of ivermectin and other drugs. Even though the treatment is effective, owners should be informed on the effects of ivermectin on a dog with the MDR1 mutation it its DNA.

The MDR1 gene regulates a pump in the brain responsible for pumping unwanted drugs out of the brain. One mutation known to occur is the deletion of four bases in this gene. If this mutation is present, the gene can’t function normally and drugs like ivermectin builds up in the brain that can cause serious health issues or death. Symptoms of the reaction against the drugs can include excessive salivation, ataxia, blindness, coma and even death. Before a dog is treated its DNA can be tested to determine if the dog has the mutation in the MDR1 gene.

There are different ways in which mutations are inherited or expressed. This mutation is inherited as “autosomal dominant with incomplete penetrance”. This means that a dog that has only one copy of the mutation (a carrier or heterozygote) can still display the symptoms, but not all heterozygotes will. If the dog has the mutation in even one copy of the gene, ivermectin treatment should be avoided.

Dog breeds most at risk include herding and collie-like breeds, especially Australian shepherds, Border Collies and even German Shepherd Dogs. However owners of cross-breed dogs should also be aware of the mutation and test their dogs!! Only one copy of the mutant gene is needed to cause the symptoms and if the dog had one collie- or shepherd-like ancestor it is likely to have the mutation in its DNA. There is no way of knowing how the dog will react to the drugs or if it has the mutation before actually doing the test.

The test only needs to be done once and if the dog is clear (normal or no mutation) treatment can be carried out without any side effects. If the dog is a heterozygote or affected, the vet will use a different treatment approach.