Marijuana Intoxication in Cats and Dogs

www.drbarchas.com
(This website by Dr. Barchas has a wealth of information on it, do have a look and remember that articles such as these are for information and knowledge and never replace vet advise) 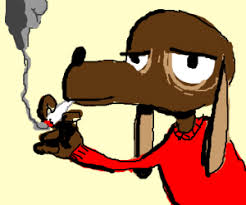 In addition to the article below by Dr. Barchas we had a look at other sources (unfortunately none in SA) and the instances of this type of poisoning does seem to be on the increase.  It seems that the most common poisoning comes from pets inhaling the smoke, ingestion of the dried plant, ingestion of foods which contain marijuana, such as brownies, cookies and even butter. When any of these foodstuffs contain chocolate, there is an increased risk of poisoning.

"A veterinary study from Colorado published recently by the Journal of Veterinary Emergency and Critical Care reported a four-fold increase in the number of dogs treated for marijuana intoxication between 2005 and  2010, following the legalization of medical marijuana in that state. Similarly, over the past five years Pet Poison Helpline has experienced a 200 percent increase in the number of cases for pets that have ingested marijuana.
​
“The trend we’ve seen in recent years involving pets and marijuana is significant,” said Ahna Brutlag, DVM, MS, DABT, DABVT and associate director of veterinary services at Pet Poison Helpline. “Of all illicit drugs, marijuana has always been responsible for the most calls to Pet Poison Helpline, but this recent increase is the sharpest we have ever seen."

Marijuana intoxication may occur in pets that have access to marijuana plants, dried portions of the plants, or foodstuffs containing marijuana.

Serious long-term health consequences and fatality from marijuana intoxication are extremely rare, although newer highly concentrated strains of marijuana and synthetic drugs (such as "spice") that mimic marijuana pose a more significant threat.  Also, pets that are exposed to marijuana may display anxiety and disorientation, and are prone to "bad trips".  Intoxicated pets may lack the coordination necessary to consume food and water.

Intoxication with marijuana appears clinically similar to other, more serious forms of poisoning.  However, most animals recover from marijuana toxicity over a period of several hours.

Long-term complications from exposure to marijuana are very rare.  However, pets suffering from marijuana intoxication may injure themselves due to lack of coordination.  Dehydration can result when pets are unable to consume water.

Fatality from marijuana exposure was almost unheard of until the development of medical grade marijuana products.  A journal article in December, 2012 reported on the deaths of two dogs that had consumed concentrated marijuana products.  However, in my personal experience dealing with many hundreds or perhaps even thousands of cases of marijuana intoxication none of my patients has ever suffered a significant long-term complication as a result of marijuana ingestion.  These include a number of patients who had consumed massive quantities of the product (I have treated patients who consumed several pounds of market-ready plant material, or dozens of doses of potent medical grade edible products).

In many cases, diagnosis is based on clinical symptoms in combination with known or potential exposure to marijuana.

In some instances, extensive diagnostic testing is performed to ensure that other, more serious forms of intoxication are not occurring.

Test kits designed to detect marijuana in the urine of humans may be used to diagnose marijuana intoxication in dogs and cats.  This method of diagnosis has not been scientifically validated, but it appears to be accurate.

The goal of treatment is to nurse the pet and prevent anxiety until the period of intoxication is complete.  Noise and other sensory stimuli should be minimized.  Some pets require sedatives or injections of fluids.

If a large quantity of marijuana is in a pet's stomach, the attending veterinarian may cause the pet to vomit.

Most cases of marijuana intoxication resolve over a period of 3 - 12 hours.

Because it is a controlled substance, people who know that their pet has consumed marijuana are often reluctant to reveal this fact to veterinarians.  The symptoms of marijuana intoxication are similar to those of several more serious syndromes.  If the veterinarian treating the pet is not aware of marijuana exposure, he or she is likely to recommend a number of expensive tests and treatments that may not be necessary.