Management of genetic disorders in dogs 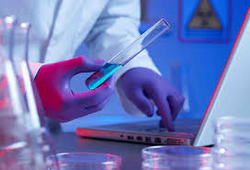 Like humans, dogs suffer from diseases or disorders that are inherited from parent to offspring. A genetic disorder is defined as a disorder or abnormality that is found in more than one generation in a line. Possibly the best known of these is hip dysplasia amongst many large breed dogs but many abnormalities can be inherited, like allergies, cancers, blindness and epilepsy. Most of these disorders are incurable and the only way to prevent it is by selecting against dogs with the undesirable trait or abnormality.

Inheritance of traits and disorders

Traits are inherited in two ways, namely controlled by one gene (autosomal or X-linked genes) or controlled by many genes (polygenetic trait).

Most genetic disorders are inherited as polygenetic traits and it is impossible or very difficult to accurately test whether a dog will pass this trait to its offspring. These abnormalities may also skip a couple of generations before it is seen again in a line. Usually there isn’t a clear pattern or statistical formula to predict how many pups from a litter will develop the abnormality. Hip dysplasia, cancers and allergies are examples.

Genetic science and technology is developing at a rapid pace and the advancements are astonishing! In livestock breeding there are tests available that can determine if a dairy bull will produce daughters that will produce more, less or equal amounts of milk as the breed average. This helps farmers to select the animals with the highest genetic merit as breeding animals. Currently there is a test for HD available, but it is still very expensive to use and can only tell you if your dog is more or less likely to develop HD than the breed average. On top of this, the environment also plays a big role and even though the results indicate the dog is e.g. 10% less likely to develop HD, if it gets injured, or is obese its chances increases to develop HD.

The mode of inheritance of abnormalities that are controlled by one gene is often autosomal recessive; however a few disorders are inherited as autosomal dominant. autosomal recessive means two copies of the mutant gene must be present before the dog will display the symptoms of the disorder (PRA, EIC and L2HGA are some examples). Autosomal dominant abnormalities only need one copy of the mutant gene to develop the symptoms (Heritable cataracts in Australian Shepherds is an example).  Autosomal recessive and dominant traits can be tested (allowing the gene has been identified) and it is much easier to manage these disorders than polygenetic traits as they have a clearer inheritance pattern.

Autosomal recessive disorders are inherited as a single gene and males and females are affected equally. Dogs can fall in one of three classes:

1.      Clear or normal – dog has two copies of the normal or healthy gene

2.      Carrier – dog has one healthy and one mutant copy of the gene, but will not display the symptoms of the disorder

A mating between a clear and a carrier dog allows each puppy a 50% chance to be clear and 50% chance to be a carrier. This is similar to the chance each puppy has to be male and female and doesn’t mean that half of the litter will be clear and the other half carriers. A litter can consist of any combination of clear and carrier pups; it can even be all carriers. There is no way of knowing how many pups will be clear and how many will be carriers. Mating a clear dog to a carrier stud dog could very well mean you sell carrier pups to potential owners, even though your kennel is clear. Therefore it is essential to know the status of a both dogs before the mating. However if a carrier dog has excellent traits it can still be used for breeding, as long as the breeder accept that the puppies have to be tested and put breeding restrictions on the carrier pups. Breeders should try to breed only the clear puppies, as these pups will have the great characteristics of the carrier dog, but not the mutation that could lead to the abnormality. This is the only way to stop the spread of the mutation but still maintain genetic diversity in the breed.

Carriers will never display the symptoms of the disorder but can produce puppies that are affected. Each pup born from two carrier parents has a 50% chance to be a carrier, 25% chance to be affected and 25% chance to be clear. Once again this is totally random and you can easily find no clear puppies in a litter or only affected puppies, since the percentages are only statistical probabilities. Breeders will often say “but I never had any problems in my lines” and this is true as their dogs only carry the disorder and don’t show the symptoms. These breeders sell puppies not knowing that they are affected by a disorder.

It is very important that owners and breeders should be aware of the tests available. Not all breeds are affected by all genetic disorders and some breeds are more predisposed to a disorder than others. Also, in some breeds the mutation can be more widespread than in another breed. Breeders and potential owners should read up on which disorders are found in the breed of interest as well as how widespread it is. For more information you can also contact Inqaba biotec - we are always willing to assist with any questions.

Owners should demand to see the certificates of the parent dogs’ tests and be sure not to buy an affected puppy. Responsible breeding starts with breeding healthy puppies. It is not always in any breeder’s control to breed only healthy puppies, especially for polygenetic traits. Avoidance of problem lines is sometimes the only option when no test is available. However where a test is available for a health problem, a breeder should strive to test their whole kennel and any potential stud dog in order to produce healthy puppies.

It is possible to get rid of many heritable traits, as long as breeders realise the severity of the problem, test their dogs and only breed with healthy dogs!