Giving your Puppy the Magic Touch

By Adam Rogers, UK
(we were sent this by a reader and have been unable to trace the actual source - if anybody can assist, please let us know admin@fods.co.za)

Everybody loves puppies! With their playful ways and cute appearance you can’t help but want to wrap them in cotton wool with many of the maternal feelings we have for our own children. However in all too short a length of time they grow to become adult dogs and it is our duty to give them as good a start as we can. In addition to puppy classes the Tellington TTouch can be extremely helpful in raising a well adjusted adult dog.

The Tellington TTouch is a unique and rewarding way of working with all animals.

Developed over 30 years ago by Linda Tellington Jones, TTouch offers ways to help animals overcome a wide variety of behavioural problems without the use of dominance, fear or force. Using a combination of bodywork and ground exercises the TTouch aims to improve the physical balance of the animal, as physical balance is achieved so mental and emotion balance follows. The behaviour of an animal can be linked to its posture in many ways, animals with tension through the hindquarters can often be afraid of loud noises such as fireworks, they may be reluctant to being picked up and placed on a veterinarians table and may be badly behaved in the car. With the use of TTouch these patterns of tension can be removed along with the unwanted behaviour.

Puppy brains are like sponges yet are beginning to show adult brain waves by the age of 8 weeks. Socialisation not only helps to influence emotional responses but also has been shown to increase the numbers of neural connections made within the brain, thus increasing the dog’s potential for learning. A study was carried out with horses whereby their brain wave pattern were measured whilst being TTouched, consistently it was shown that all four brain waves (alpha, beta, theta and delta) were produced when being TTouched. Petting, stroking and
brushing produced no change, only the circular TTouched produced this amazing change in the animal’s brain waves. It has been proven that puppies raised in a stimulating environment have an increased ability to cope with stress in later life, so if we are able to stimulate our puppy’s brains with TTouch then the potential to increase their ability to learn is enormous!

Just like children, puppies have little idea of what the world expects of them and how to behave, ‘bad’ puppies are often showing signs of worry or anxiety or possibly reacting to pain or discomfort in their own bodies. These behaviours are reactive and instinctive; nature governs how each animal will respond to the situation. Some puppies will roll over in a submissive type gesture others will run away while others will mouth or bite. By using TTouch it is possible to bring animals into a state of awareness whereby the animal is brought into a thinking state rather than the instinctive reactive mode normally seen. This ‘thinking’ state does away with the need for the harsh, negative behaviour modification methods we are all trying to move away from.

As well as learning all about the world around them, puppies are also on a voyage of self discovery, if one considers how long a human baby has to learn how to coordinate its limbs of it’s own will it is amazing that a puppy can do all it can in such a shot space of time. It is no wonder therefore, that in the process some body parts get left behind of forgotten, resulting in rather bumbling gangly puppies! With the use of TTouch
bodywork we can give the body feedback as to what is where allowing the animal to achieve a much more balanced posture and mind from day one. 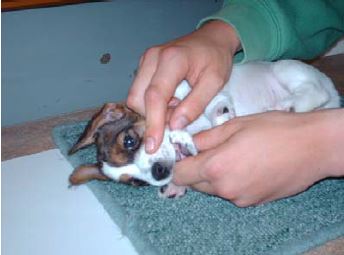 Many puppies will be mouthy or licky and most will go through a chewing stage. Licking and mouthing are often emotional responses to fear or anxiety as can be chewing objects. Mouth TTouches involve making small, light circular movements on the outside of the dogs mouth, with persistence you should soon be able to make the same light, circular movements INSIDE of the puppy’s mouth on the gums (Your fingers may need to be
moistened with a little water first) This helps to calm anxious, emotional behaviour commonly seen in new puppies. The mouth TTouch also helps reduce the irritation caused during teething, reducing the puppy’s wish to chew every hard object you own!

Photo 2: This puppy is lying down enjoying the Mouth TTouch; however she still finds it rather unusual. The Mouth TTouch is very light and not uncomfortable; dogs will often push you away to start with simply because it’s a strange sensation. The Mouth TTouch is all the more important for puppies to learn to accept having their mouths handled for tooth brushing and vet visits.

The mouth work helps reduce inappropriate chewing. It is important to do short sessions of mouth work and know that much of the benefits will be seen later.
An overly anxious puppy with a continually wagging tail can be calmed by gently containing the tail, causing the wagging to stop, rather like a hysterical person made to sit to calm down. Stopping the movement of the tail often results in an instantly calm puppy.

After some initial confusion, most puppies love the Tail TTouch, this puppy has become totally relaxed at the gentle movements. When the Tail work is being done, it is useful to feel for kinks and bumps as these can indicate levels of tension in other places.
Belly lifts

Have you ever noticed how you get ‘butterflies in your stomach’ when you feel worried? Puppies can suffer the same, holding a great deal of tension in their abdomen often resulting in vomiting especially in the car. Ideally we would like a puppy’s experience of the car to be as positive as possible to prevent problems in later life. By using a small towel or your clasped hands to make slow, gentle lifting movements, you can work to reduce the tension through the abdomen.


Photo 4 & 5: This puppy is having gentle Belly lifts with a piece of kitchen towel, the lifting movement is tiny, only 10mm (1/2 inch) of so. Notice how, in picture two, the puppy has relaxed his spine allowing his back to be much more flexible, also he is now standing more squarely with both hind feet being level, as apposed to having one foot behind him as in picture one.

The TTouch offers a fun opportunity for the whole family to have a positive influence on the life of their new family member. Children take to the TTouch movements with ease and it can be a fantastic way to teach a young child to interact with a puppy, counteracting their instinctive need to grab and cuddle! Each TTouch movement is complete and every TTouch will make a difference.

Above all remember that your puppy is often behaving instinctively and knows no other way. With guidance, a lot of patience and the power of TTouch we can work to make the puppy phase run as smoothly and be as much fun as possible, with a well adjusted adult dog at the end of it!