Dog Sleeping Positions and what they mean


from www.casper.com - great website that in addition to great dog beds with memory foam, also have human mattresses, and some really interesting Blogs to read - enjoy!

https://casper.com/ - Pic www.casper.com - blog
​You may notice your dog sleeping in a position you’re not familiar with. Does it mean anything? 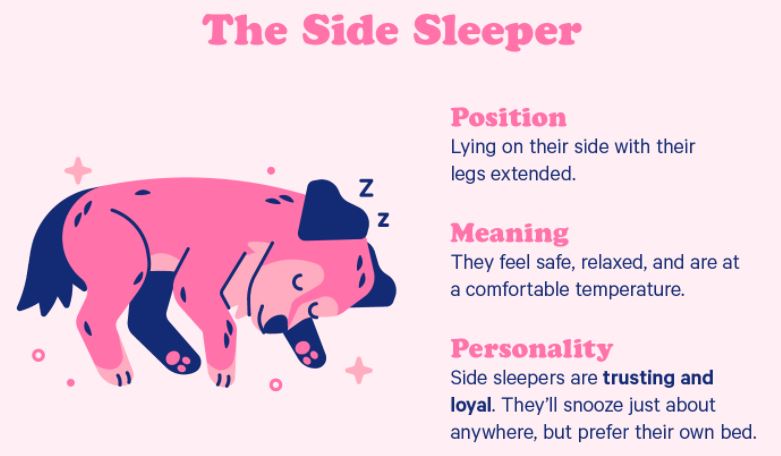 ​Meaning: When your dog sleeps on their side, it means they feel relaxed and safe in their environment. According to Dr. Jennifer Coates, DVM, who serves on the advisory board for Pup Life Today, “dogs will sleep in this position when they are feeling comfortable with their surroundings and are at a comfortable temperature.”

It’s also when they’re likely to get the most deep sleep. Jen Jones, a professional dog trainer, behavior specialist, and founder of Your Dog Advisor, says that “this position is also where you’ll often notice ‘sleep running’ and twitching during your dog’s dreams, as their paws are loose and free to move.” 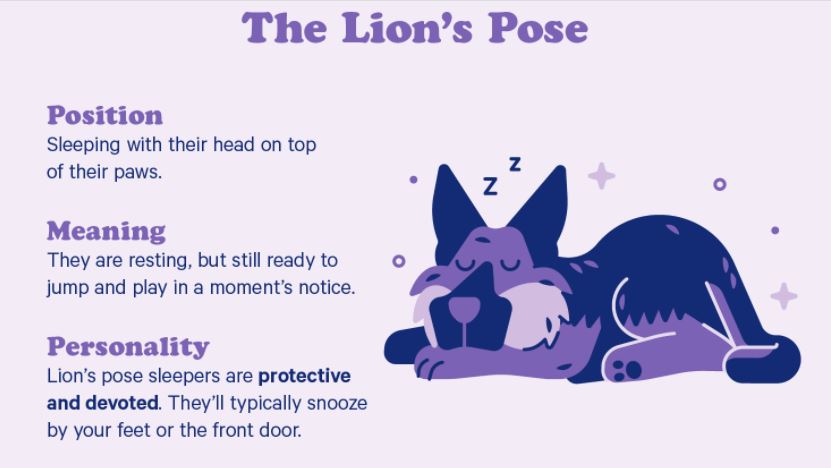 The lion’s pose sleeping position (also called ‘the sphinx’) is when your dog sleeps with their head on top of their paws — similar to statues of lions you might see outside of large buildings. Your dog can also fall asleep in this position with their front paws tucked in and their back legs at one side.

​ Meaning: When dogs sleep in this position it means they are resting, but not sleeping deeply. According to Dr. Sarah Wooten, DVM, CVJ, and the vet expert at Pumpkin Pet Insurance, “dogs will often start out in this position if they feel like they will need to jump up quickly.” 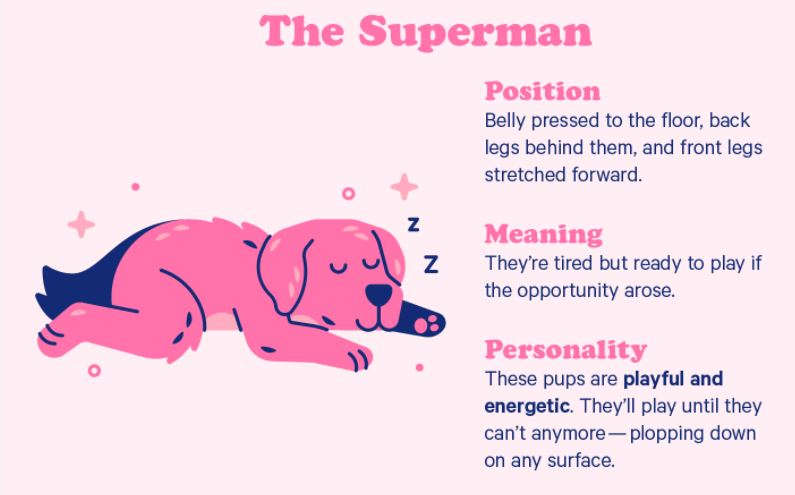 The superman position is when your dog lays sprawled out on the ground with their belly pressed to the floor, their back legs behind them, and their front legs stretched forward. This is a common position among puppies and very playful dogs.

​Meaning: When your dog sleeps on their stomach in the superman position, it means that they’re tired but ready to play if the opportunity arises. Jen Jones says that “this position allows for dogs to snooze quickly, but be ready to hop up at a moment’s notice to play.” This is a common sleeping position for high energy dogs during the day. 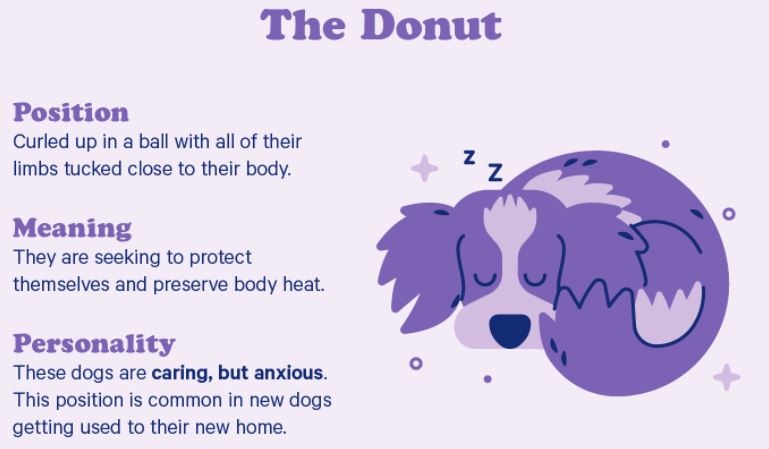 The donut position is when your dog sleeps curled up in a ball with all of their limbs tucked close to their body. Sometimes their nose will touch their hind legs and they may even drape their tail over their body.

Meaning: This position keeps all of the dog’s vital organs tucked and hidden. When a dog sleeps in this position, it means that they seek to protect themselves while sleeping or that they’re still getting used to their environment. This is especially common in stray or new dogs.

This is also a favorite position for dogs when they are cold. By curling up in a ball, they are attempting to preserve their body heat. Dr. Linda Simon, a Veterinarian and Veterinary Consultant for ThePets, says that this is a popular position “when the weather is cold and/or windy, as it would have protected dogs from the elements when they slept outside.” 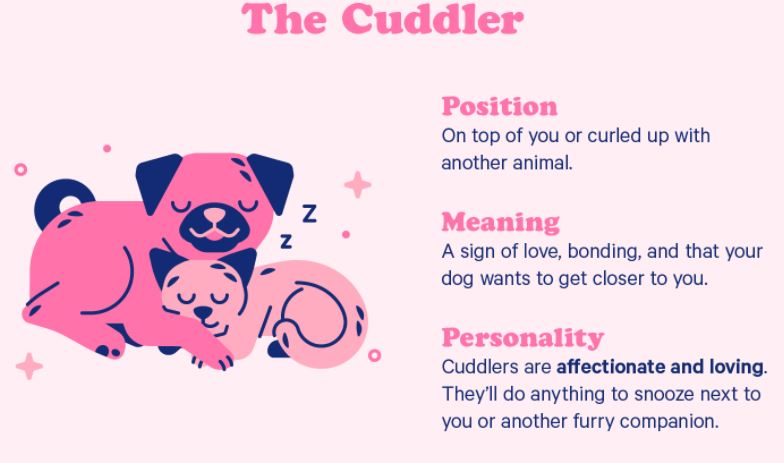 One of the most adorable dog sleeping positions is ‘the cuddler’ position. This is when your dog prefers to sleep on top of you or another dog cuddled up. This is a great position for those that love to let their dog sleep in bed with them.

​Meaning: Peter Laskay, a pet expert and pet care blogger at Petworshiper, says that this position is a clear sign of bonding and “that the dog wants to get close to you or other dogs.” 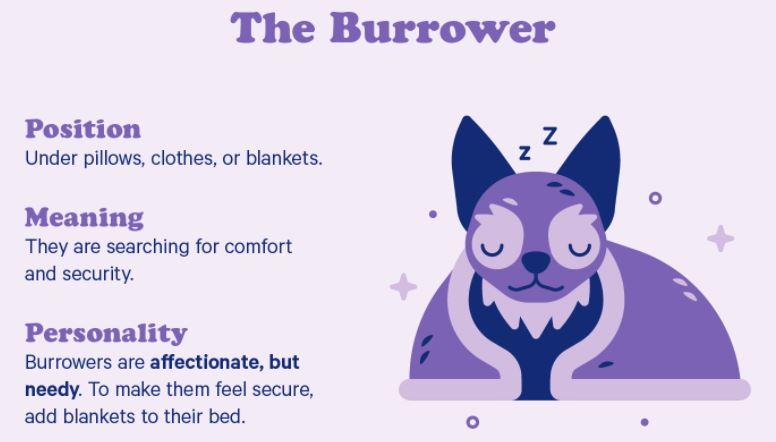 Have you noticed that your dog seeks out pillows, clothes, or blankets to sleep under? If so, your pooch likes to sleep in the burrower position.

Meaning: When dogs sleep in the burrower position, they are searching for comfort and security. They often need lots of attention and affection to fall asleep. 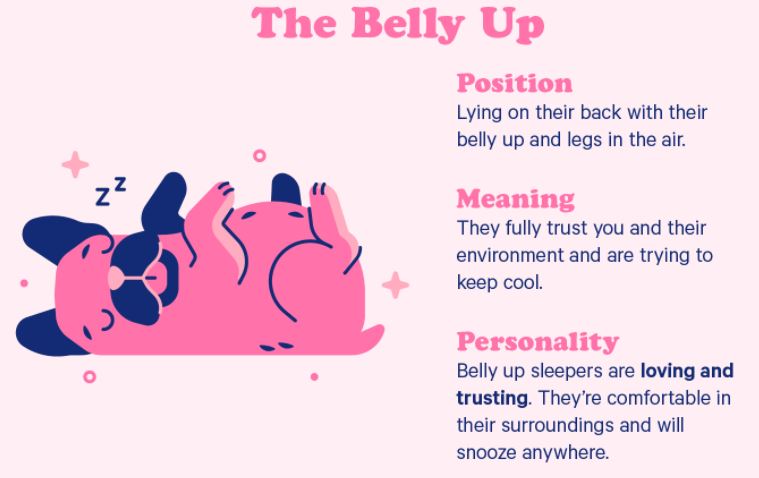 Arguably one of the cutest dog sleeping positions, the belly up position is just as it sounds. This position is when your dog lies on their back with their belly up and paws in the air. As uncomfortable as this position may look, this is a sign of true comfort and relaxation in dogs.

Because this is such a vulnerable position to be in, when dogs sleep on their back with their paws in the air, it also means that they are fully trusting you and their environment. Dr. Sarah Wooten says that “because they are exposing their belly and their vital organs to the world, you have to know that they feel really secure to fall asleep in this position.”

As dogs age, you’ll notice that they no longer sleep on their back as much. According to Steffi Trott, a professional dog trainer and the owner of SpiritDog Training, this is due to arthritis and you should not assume that your dog is no longer trusting you.

Similar to the cuddler sleeping position, when a dog likes to sleep back to back, it means they like to cuddle up and get as close as possible by placing their back next to either you or another dog. In the simplest form, this position is a sign of love and comfort.

Meaning: Sleeping back to back indicates a sense of intimacy. When a dog sleeps in this position, they are showing you affection and trust. According to Jen Jones, “dogs may choose to sleep this way with one person in the home they feel safest with.” This can include additional family members or other dogs and cats.

Whether it’s lying face down on the kitchen floor or sprawled out on your pavement, dogs tend to sleep on a cold surface when they are hot. This type of position can take the form of the superman pose or could be similar to the lion’s pose. Whatever it is, your dog is likely making sure their tummy is touching the cold surface.

​
Meaning: This position is directly related to temperature. “Dogs may be hot if they sleep sprawled out on cool surfaces, particularly when they’re on their bellies with legs extended maximizing the amount of unhaired skin that touches the cold floor or ground,” says Dr. Jennifer Coates. If you notice your dog seeking out cold surfaces to sleep on, try your best to cool them down and give them some water.

Some dogs seek out a sleeping position where their head and neck are raised. They will usually leverage the side of their dog bed or a couch cushion.

Meaning: If your dog likes to sleep in a position where their head and neck are raised, it could mean that they may have issues breathing properly — something commonly seen with chronic heart disease and other health problems.

According to Dr. Linda Simon, if your dog sleeps in this position “keep an eye out for worrying symptoms such as faster breathing rate, noisy breathing, or a reduced ability to exercise.” If you notice any of these symptoms, make sure to contact your veterinarian.
Download Infographic
​