Danilo: The Dog that brought TTouch to South Africa 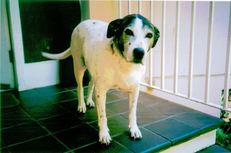 How do I condense into a couple of pages, the story of 17 years with Danilo?

It began when I went to the Sandton SPCA looking for a new puppy. What I found was a four-month-old pup that had been found on the street. A pointer cross who wasn’t particularly cute, but who had something that spoke to me. I took him home and our life began together.

In 1990 I was a typical dog owner who loved dogs, had lived with several, but knew very little about them. When I look back I am appalled at how many mistakes I made and how instrumental I was in developing his character and challenging behavioral patterns.

Danilo (named from the operetta “The Merry Widow” that I was singing in at the time) was meant to be an outdoor dog that was going to sleep in a doghouse in the front drive area. We had had some trouble with thieves jumping over the wall and stealing radios etc. out of cars. I didn’t expect him to actually guard the cars, but to simply let us know when someone was there.

At the time, I had 3 other dogs living & sleeping in the house and I can now imagine how confused he must have been that he wasn’t allowed to sleep inside as well! He was a rescue dog and needed to feel secure in his home and being put outside at night certainly didn’t help. Fortunately after 6 months when I went overseas, one of my softhearted staff, Sophie, let him in and by the time I returned, there wasn’t any possibility of putting him out again! (She is still today wiser than I!) 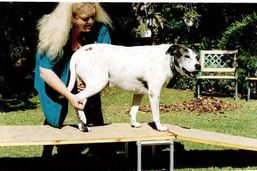 There were many problems that started to crop up and by the time Danilo was a year old, he had truly terrorized my other dogs. Not knowing what to do, I typically called my Vet and asked for help. He sent me to a highly recommended dog trainer who used what I now consider to be old-fashioned training methods. It was based on the theory of Dominance and used very harsh punishment methods to correct unwanted behaviour.

We started Danilo’s “treatment” by dealing with the problem of rawhides. A rawhide was something so precious that he would go for any dog in the vicinity. He didn’t want just his, but all of the other 3 as well. The idea was to throw pop crackers (fireworks) on the floor if he went for the other dogs or their treats. This was to scare him so that he’d leave them alone. Well, Danilo could have cared less, but the noise terrified my other dogs!

We dealt with many problems such as going out of the gate and not coming when called, chewing the carpets and furniture (always the orientals and antiques!), turning over the garbage can for food, leaping over the garden wall (over 7 foot), not allowing the other dogs to get attention, wanting to kill the paper boy, being agro with other dogs on the street or at training etc. etc. The plan was to set him up so that he could be caught in the act and then give him an appropriate –horrible- punishment to deter him.

For carpets, catch him chewing, then roll him up in the carpet and beat it while making lots of noise!
For garbage cans, catch him doing it, then put him in the garbage can and bang the lid!
For going out of the gate, catch him in the act, then grab and hang by the neck on the way back in!

Today I understand this to be not only abusive but also partly responsible for his becoming more aggressive. However, at the time, I had a problem and was ready to do anything to help my dog. Although it felt wrong to me, I had no alternatives from which to choose. It’s a hard life’s lesson to learn to “trust your instincts”! I now live by the principle that if it “feels” wrong, it probably is!

I was a typical owner who had a big concern and trusted the experts to tell me how to fix it. I would like to say that the trainer I used was very good and knew what he was doing according to what I now believe to be outdated training techniques. Most of the great dog trainers in the world today started exactly the same way, as it was the method they had been taught. However, today we know so much more! And there are many “cross-over” trainers out there who once used harsh training modalities who have found that there are more humane and effective methods.

Then from punishing and yelling at my dog, I found a dog psychologist who told me to ignore him! I did all sorts of things like never letting him initiate interaction, turning my head away when he was demanding attention, etc. At the end of 5 months, I was told that he was one of the few dogs who indeed only wanted to be President and not Vice-President! Well, while I knew little about the Alpha dog theory in those days, I certainly knew without any help that Danilo wanted to “be in charge”!

So it wasn’t long before Danilo began biting people as well as terrorizing my other animals. For a long time we thought he was a “racist” dog as he only bite black guests or workers! Then I went to a well-known behaviorist who said that he needed to be more dependant on me so I should vary his feeding times. I.e. one day feed in the morning, next day afternoon, next day – no food at all. This would then make him constantly look to me to find out when his next meal would be. On day three of this regime, he bit the first person that walked into the kitchen while he was eating, who just happened to be white! So now he was multi-racial.

To find out more about this amazing modality contact www.ttouch.co.za or info@ttouch.co.za