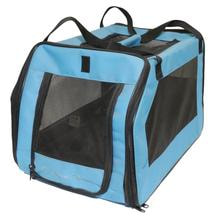 .​We love crates, not just for the smaller breeds, but also for the bigger dogs, however what is vitally important is that the crate is a place of safety for a dog, never a place of punishment and that the dog is taught how to use it in the correct manner, not just stuck inside it. Additionally, unless the dog is being confined for medical reasons or the crate used overnight, a dog should never spend long periods of time in it with it closed.
It is not a place where you put a dog in when you go out for safekeeping. Unfortunately, it does appear that on occasion, people use the crate for this reason, especially with dogs suffering from separation anxiety to prevent destruction –  we cannot think of anything worse for the poor dog!
Here are some ideas as to how your Travel Crate could be used:-
​
Choosing a crate, size, material and location

There really are a lot of options available, and these include plastic crates, fabric crates and metal crates.

The fabric crates are great in that they fold away easily, can be used when travelling, and perfect if you go camping or hiking and take your dog with you. However, they are not secure, and if you are going to use one of these, it must be with a dog that is not an escape artist or will try and chew its way out – if any doubt, then rather consider the plastic or metal options. What you do need to bear in mind with the metal crates, is that even though they look very substantial, and on average are not easy for a dog to get out of – with a professional escape artist, it can happen, and if you are concerned, then rather reinforce the joining parts of the crate with zip ties.

This can be confusing, especially if you are getting a crate for the first time and have a pup that is going to be growing into a much larger dog. The main thing to consider, is that when the dog is fully grown, it must have space to lie fully stretched out , be able to stand up and turn around with ease.

What often happens when you are looking at getting a crate for a pup that is going to be growing a lot, is that the person will purchase a crate that they feel will be perfect for the pup when fully grown or that it has plenty of room to move about. However, if supplied with too much space the pup may use one end of the crate as a toilet!

If you do get a crate to suit your dog when fully grown, then if a metal crate, simply cut a piece of cardboard and place in such a manner that you are making the crate smaller, until the dogs grows more. Alternatively, depending on the size of the crate,  you can place a cardboard box at the back half of the crate. This saves you from spending extra money on unnecessary crates and will prevent the pup using one end as a toilet.

If your dog is already fully grown, then measure his back from his neck, where the collar sits, to the base of his tail. Then add a few  centimetres to that measurement. Measure his shoulder height from the top of his shoulders to the ground. For soft-sided carriers, add  5 – 7 cm to shoulder height. For hard-sided carriers, add 7-11cm. Also ask the people who are selling the crate which option would be best for your dog, they are normally very clued up as to what crates will fit the average breed sizes when fully grown.

If you are going to have your crate available for your dog at any time in the home, then consider the place best to have it. It should be in a room where the dog can still be part of the family and be able to access it when it wants too and do avoid areas of high traffic – this is your dog’s safe place.

We used to keep our dogs crates in the bedroom, and it was not unusual for our dogs to go and have a lie down away from grandchildren running around, when they wanted some peace and quiet. The doors were very seldom closed, and they would cuddle in there at night of their own accord.

If you are going to be using the crate for when your dog is in the car, then best place to keep it, is placed near where the car is kept for easy access.

How to train a dog to go in a crate and enjoy its time there.

One thing you never do, is just put the pup or dog in the crate and close the door!

The following sounds like it is a lot of work, but it is very seldom that I come across a pup or dog that does not enjoy the crate if the introduction to it is done properly - many dogs will just go inside and make themselves at home – we must remember that the dog in nature is a den animal and most dogs enjoy a place where they can snuggle up.

The exceptions, and I have only had two, were dogs that had been adopted and had obviously been abused (perhaps being locked up was part of the abuse) and it just took a little longer to get them crate trained. As soon as they had accepted it, they happily went to lie in it of their own accord and used it as their night-time bed, even with the door left open.

With a puppy who is introduced to a crate when it first comes home prepare the crate beforehand,  with a nice cuddly blanket and a really interesting chew toy or two.  You want the crate to be comfortable but do ensure that the dog will not be too hot.

Lure the pup in the crate with a piece of food and offer the new chewy to have a nibble at (it is often helpful to ‘spike’ this a bit by smearing a little peanut butter in the cracks – if possible use organic peanut butter as excess peanut butter can be toxic to dogs and never use peanut butter with artificial sweetener xylitol, which is highly toxic to dogs). Do this as often as possible, leaving the door open. This allows the pup to come in an outside by itself and will eliminate any fear associated with the crate. A good way to speed this up is to hand feed the pup its daily ration by having the pup go in and out the crate to get individual pieces of dog kibble.

When the pup appears tired, again lure it into the crate with food, offer the chewy to the pup (or even have a new one, already spiked, for interest) and then close the door. At this time, we suggest not leaving the pup alone. Stay where the pup can see you, and if it cries or whines, just ignore it and the pup will soon drop off to sleep. What is very important here is that if your dog is crying or pining to get out, that you do NOT take the dog out till it is being quiet. If you take the dog out whilst a noise is being made all you are achieving is having the pup train you that ‘when I make a noise and cry, mum and dad let me out or come and see what I am doing!’

Keep an eye on the pup and when it wakes up, open the door, pick the pup up and take it to the toilet. By picking up the pup you eliminate the chance of an ‘accident’ happening. Doing this often during the day will ensure that the pup gets used to the crate and you will be able to close it the first night. Then simply put the crate next to your bed and pop the puppy in with its blanket and some nice chewies.

You use the same procedure can be used for an adult dog and in both instances,  just gradually increase the time period. Once the dog is happy with the crate, you can use it in the car for travelling.

The most important factor is that the crate is something the dog views as rewarding – simply because every time it goes into it, a lovely chew toy such as a Kong is supplier. We suggest that this specific chew toy is only given when the dog is in the crate – this makes it much more rewarding for the dog.

Another aspect to be considered, is that if you only use the dogs crate for going to the vet, for example, it could easily build up the association that whenever I go inside the crate in the car, I go to the vet! You really don't want this to happen, so do ensure that you use the crate as well, if going to the park for a walk for example.

We can assure you that once you have used a crate with your dog and discovered the benefits and how dogs love it, you will never again have a dog without considering a crate!