Please visit and LIKE our Facebook Page and share with family, friends and on your own Facebook page, and ask them to share further – it is only by working together and sharing knowledge and education that we can improve the lives of dogs and assist owners. We do not inundate you with posts – an average of 5 per week, and the odd Did You Know. Thank You!

​Can TTouch really impact on Shelter dogs and improve their behaviour?

by Scotty Valadao - Friends of the Dog

​With regard to the question above, yes, not only can TTouch improve behaviour, it can dramatically lower stress levels and as such improve the quality of life for a dog in a shelter.

Charmaine and I were fortunate enough to be able to present our Canine Behaviour Shelter Course at Fallen Angels Animal Rescue in the Cape last month, and once again, we were totally in awe of the changes that took place in the dogs thanks to TTouch being one of the tools used. 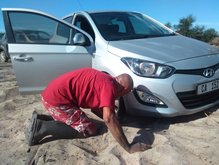 ​Fallen Angels is situated outside Melkbosstrand in the Western Cape. and the work that the Fallen Angels Team of Gayl, Shireen, Charmaine, Craig and the rest of the staff do, is really fantastic. The circumstances they are faced with make the challenges of running a shelter a bit harder as the shelter is situated on sand, with very little shade and with a road that requires constant maintenance as no matter how much it is worked on, the wind blows across the road again in no time at all.

Gayl and her daughter Cassidy share their home with approximately 19 dogs. Apart from a few dogs that belong to the family, the rest of these dogs were not coping in the general shelter and some of the behaviours being exhibited were really extreme, so they were brought into a home environment to see if they could be helped.

Although we saw improvements in all the dogs we worked on in the main shelter, it was on these 19 dogs where we witnessed unbelievable changes come about in a very short period of time (less than a week).

Below is the story on a few of the dogs that really touched my heart.  I love what I do and having TTouch as one of the main tools that I use, I am constantly amazed at what can be achieved– TTouch really does take your tools as a behaviourist to a totally different level – or is it that being a TTouch Practitioner, takes my tools as a behaviourist to another level!
It took months to get the wound to heal with vet visits a few times a week. Due to the pain that this caused her, if anybody tried to interact with her she would run away screaming or else turn around and bite, and even Gayl could not touch her tail.  Additionally, she would tolerate a collar, but when the lead was attached she totally panicked and backed off screaming and ran away.

The docking that this young pup endured was exceptionally traumatic and resulted in what is termed ‘One event Learning’ – Nala’s perception was that if anybody came anywhere near her or her tail it was going to be a painful experience and she had to protect herself, so in order to do so, she just tried to bite anybody who came near her. One Event Learning is not an easy thing to turn around, however, over a few days, with short sessions of TTouch being done, her whole personality changed – she became the lovely, funny and friendly little pup that she should have been in the first place.  She interacted with everybody on the course, took great pride in showing off how clever she was, and all this with a little bit of TTouch.  In addition to becoming friendly and allowing anybody to touch and move her tail and touch it, she was desensitized to the lead and took great pride in showing off.

Just before we left Fallen Angels, Gayl had taken Nala to the vet and much to his surprise she was walking beautifully on lead and was friendly to everybody in the practice and had no objection to being examined – he then told Gayl that from the degree of aggression that this little girl exhibited, he thought that the inevitable end to her future would be euthanasia. What a turnaround and what a brave little dog to learn to trust again and Nala is now up for adoption.  ​
The other dog that I must mention is little Snowy who is a Chihuahua/Fox Terrier mix. Snowy and her sister were rescued from a township in the Westlake area. She was deformed from birth and both of the pups were in a terrible condition and extremely weak, and unfortunately her sister did not make it.

Snowy was aggressive to everybody except Gayl and her daughter, and the situation was so bad that when people came into the house she had to be put in a separate room as she would have bitten. She even exhibited this behaviour to the rest of the people involved in the shelter, nipping them on a regular basis.

The changes in Snowy were phenomenal – she started to voluntarily interact with other people, the aggression virtually disappeared (there was initially a little bit of aggression with resource guarding towards Gayl, which we sorted out). She allowed people to do TTouch on her and would jump up on your lap to ask for more! This brave and plucky little dog is now up for adoption.
​
​The other dog who had a major break through was Bentley. He is about 2 years old and came from Westlake like Snowy, and is some type of Terrier cross.  He was a typical fear biter and would run in and bite as people presented their backs to him. His fear of people was extreme and he would simply not go near people unless, as mentioned, from behind to bite them. He was also petrified of a collar and lead and if you even showed them to him, he completely shut down.

Bentley slowly and surely started to change and when we left Fallen Angels he was happily interacting with everybody,  trying to climb on them for  more TTouch and was happily desensitized to both a collar and lead.

What I did with the above dogs was that as Charmaine was teaching, I was using Calming Signals, treats and ‘air touches’ to start to get these dogs to start to trust me. An ‘air touch’ is a variation of what we call the Llama touch – one uses the back of the hand as opposed to the palm, which is much less invasive for a dog. However, you don’t actually touch the dog initially - you just stroke with the back of the hand about 6 “ away from the body and this often has the result of impacting on the nervous system and preparing the dog for actually being touched.

In TTouch you very quickly learn the motto ‘that less is more’ when dealing with a dog with fear, and this is just what I did – one or two Llama TTouches and then backed off. This resulted very quickly in the dogs starting to approach me of their own accord and I gradually built up the touching at a pace and intensity that the dog could tolerate, again keeping the ‘less is more’ in mind, which is often very hard to achieve as you see you are making progress!

This is a wonderful TTouch to use with dogs fearful of people when one cannot use equipment such as two points of contact to get close to them. I had no idea if what I was doing would work – all I knew was that it could not hurt. 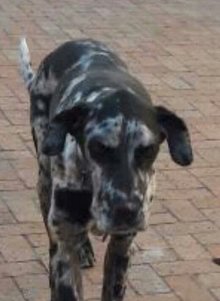 he final dog I want to mention is  Hamlet.  What happened with Hamlet was that a man driving past saw this gorgeous, huge Great Dane being lead with a piece of wire around his neck and being hit with a metal bar when he refused to move.

This marvellous humanitarian stopped and told the man he could not treat a dog like that. The ‘owner’ said that the dog was useless anyway and the man should take it away – luckily for Hamlet, the did, and took him home where he contacted Fallen Angels. Thank God for people like this that rather than just driving past thinking ‘not my problem’ actually take steps to try and stop the abuse.

Hamlet arrived at Fallen Angels as we were working outside with some of the shelter dogs. Gayl and John got him off the Bakkie and both of them were holding him with two collars and leads. These really did not do much good and Hamlet lunged forward with great force which ended up with John holding on for dear life and Gayl being knocked to the floor and dragged behind them.

As they managed to stop him Gayl asked me if I could help, so off I went to see what I could do. I immediately put each lead over his chest into a double Balance Lead and we took the tension out of the lead and at the same time I was doing very fast and small TTouches all over his body and his ears (the ear contains over 100 Acupressure points and quickly stroking the tip of the ear can help to stop a dog (or human or any animal) from going into shock.

This resulted in him standing still – however he had gone into a total freeze due to stress and would not budge and we had to get him away from the entrance and into a run. With Gayl holding one of the Balance leads, I walked in front of him, stoking on the other lead and talking softly to him. I had to ask John to stay close to me in the event Hamlet took off, John could grab me around the waist, as there was no way I could have stopped him and we could not risk him getting loose and running away.

His body quickly relaxed and he took a tentative step forward.  We put him back in the 2nd Balance lead and moved him a step or two at the time, with me doing TTouch all over his shoulders and ears. Within about 10 steps his body was greatly relaxed and then he suddenly dived onto the floor on top of a piece of old carpeting. We let him sniff to his hearts content and when he was ready, moved him forward – this time he moved with absolutely no tension on the lead, no pulling and looking around him with great interest and was lead to his new run.

Please help any shelter you can, whether financially, walking dogs, giving donations of items for their shops, offering your time etc. To Fallen Angels, and all the other shelters - we salute all the shelters!​